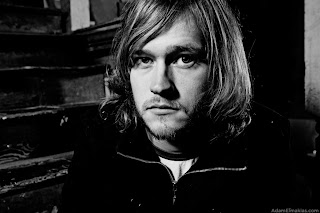 Youngest kid, James has a full summer ahead after such a busy spring. This is nothing compared to the events coming up this fall for him!

The Christian Metal band, The Devil Wears Prada has returned home to the states after a successful two weeks playing music festivals all over Europe. Download Festival, at
Donington Park in Leicestershire, England was the final show. Here is a clip just prior to The Devil Wears Prada taking on Main Stage:

After arriving home, Ferret Music released one song, Born To Lose, from their highly anticipated album, which will remain unnamed until the release date. The song was released on Monday June 13, 2011 and was well received. It isn't the heaviest offering on the album, but Frontman, Mike Hranica, states it is a comprehensive preview of the album. Music and lyrics are available here:

For the third summer, twice on Main Stage, The Devil Wears Prada is looking forward to a long summer touring the United States with Warped Tour. Beginning Friday June 24 in Dallas Texas, this tour goes through August 14 ending in Hillsboro, Oregon. Crisscrossing the country several times. Expect to see the exciting new shoes,

everywhere! Update: After one week on sale they have sold out, but are now again available.

To finish out the summer, The Devil Wears Prada and Ferret Music has planned to release their highly anticipated new album on Sept 13, 2011. This album has been in the works for six months now, in two month- long studio sessions. One session in Kansas City last winter and another in Chicago this Spring, finishing up their recording in Boston with Adam Dutkiewicz known as Adam D. Joey Sturgis worked as well on the production with James Baney, the keyboardist. All music and lyrics are written and produced by The Devil Wears Prada.

Big Dreamer said…
I am extremely inspire man.awesome effort,nice work,thanks for great info check it out Easeus Todo Backup 8.2 Crack
November 4, 2015 at 1:31 AM

When we first arrived at Disney World we took the boat over to the Magic Kingdom.  Mr. Bill remarked, as we passed the Polynesian Resort, he never had any desire to stay there.  It looked boring to him from the outside.  I hadn't thought much about it, but I did like the lit torches when we passed by on the monorail.  I decided this trip, since we had a free day, we would stop in and tour the three hotels on the line.  We toured the Grand Floridian , the Polynesian Resort and the Contemporary Resort From a distance it doesn't look too exciting.  I could understand his lack of enthusiasm.   When we stepped off the monorail however, the entrance was incredibly gorgeous.  The waterfall was something we hadn't noticed as it was somewhat hidden from the view of the passengers riding.  It was framed by colorful blooms and multiply kinds of foliage.  Completely setting the stage for a visit in the South Seas.   Inside the decor was tropical and spacious with o
Read more
(adsbygoogle = window.adsbygoogle || []).push({ google_ad_client: "ca-pub-9738176789466243", enable_page_level_ads: true }); cookieOptions = {...};'