Lauren and I had a little adventure the other day.  It was a bit challenging because Lauren does not like to spend time in the city.  The traffic, the heat and numerous other reasons surfaced when I proposed this jaunt but she humored me and off we went to visit the Carew Tower.   The shadows were amazing in the sunshine of Cincinnati however my camera didn't seem to pick up on them very well. 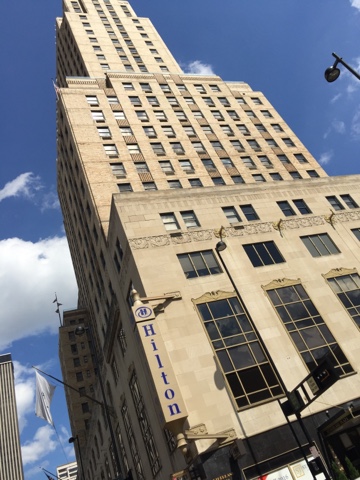 It wasn't difficult at all.  Street parking for two hours gave us ample time to walk the two blocks and travel to the observation deck. 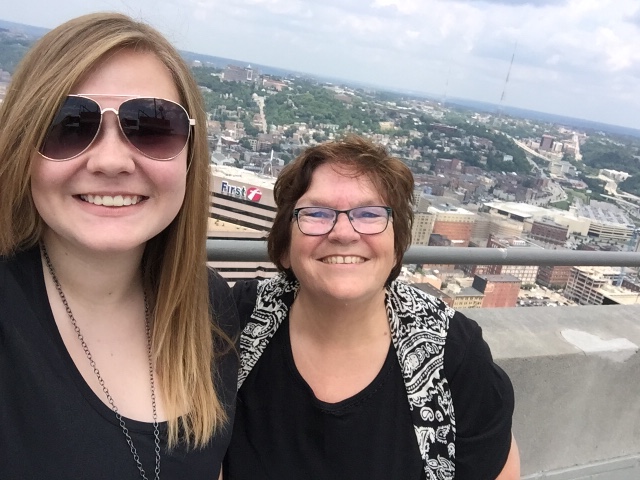 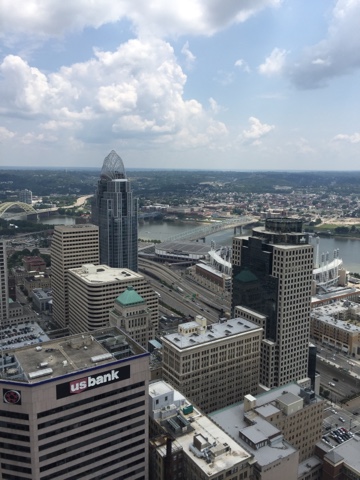 The views were stunning.  This is the second tallest building in Cincinnati. I have never seen this deck before and I even stayed at The Netherlands  30 years ago this summer.  How we missed this, I'll never know. 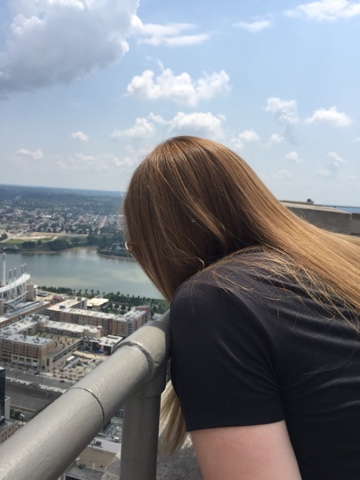 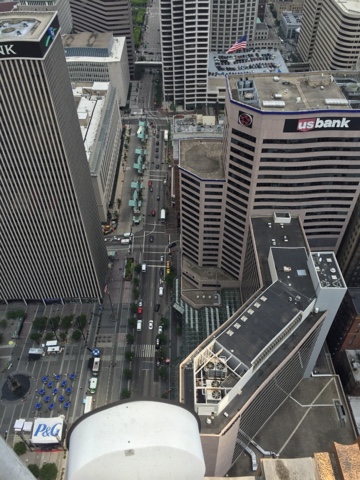 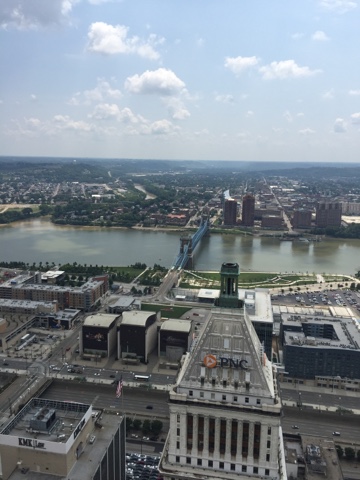 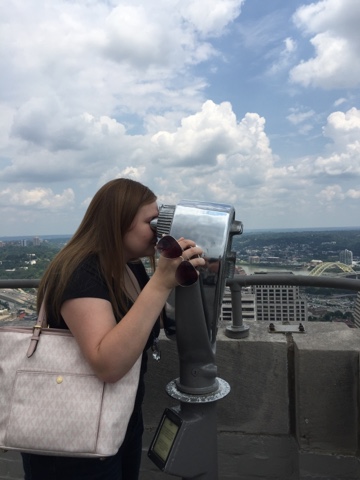 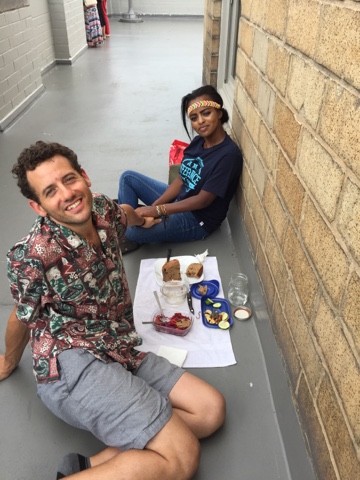 .
This couple was having a lovely picnic on the deck!  How romantic!  They allowed me to take a picture and I asked for a business card to send them the link to this blog.  It turns out he is a well known glass artist!  It's good I didn't know that at the time because I might've been babbling about how much I like art glass and asking for his autograph or something! You can see his beautiful work at www.DarrenGoodman.net it was quite exciting later when I realized I had crossed paths with someone whose work I admired so much!  It's not always we get to know that!

Our lunch was delicious though!

We chose the deli in the building 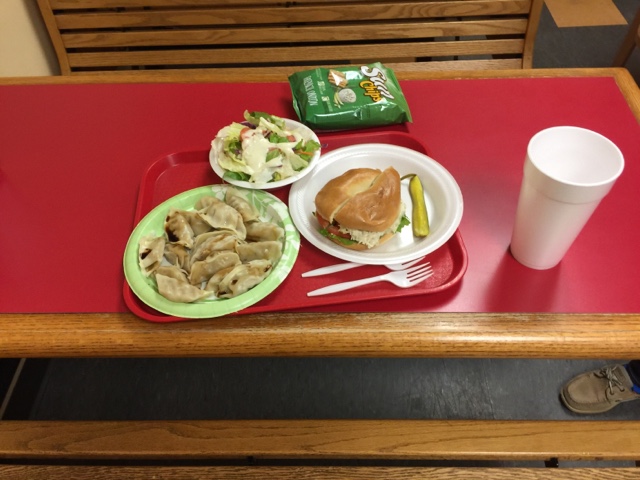 And we were quite satisfied with the delicious  Asian noodles and chicken salad!  It was a fun afternoon spent with my granddaughter, Lauren.  I'm grateful for small things!

I'm now on YouTube!  My channel is Jeanne Baney

Patty said…
Wow! What a view from the top! We went to the top of the US Bank tower in LA, but the view is not as pretty. And to meet Mr. Goodman, that's amazing. I looked at his website - his work is stunning! We watched a glass blowing demo at the Laguna Art Festival and can see how time consuming it is to create work like that. (and HOT)!
So nice to spend time with a granddaughter, she will never forget it!!
August 10, 2016 at 9:22 AM

Pondside said…
You must have had such a lovely afternoon. The view is gorgeous. I don't know much about Cincinnati, and didn't realize it was on a river - must look it up!
August 11, 2016 at 3:13 PM

Susan said…
Oh, isn't spending time with grandchildren among life's greatest gifts, Jeannie Marie? So happy you had this excursion with your granddaughter. You made precious memories! Susan
August 14, 2016 at 6:08 PM

Paula Scott Molokai Girl Studio said…
Great memories for both of you in a grand location!
August 15, 2016 at 3:14 AM

Debbie-Dabble Blog and A Debbie-Dabble Christmas said…
Jeanne,
Thanks so much for sharing those views because I am afraid of heights and would never go to the observation deck in a building that high!! I can live through you!!
Thanks too for stopping by!! I am getting tired of watering the flower s but lately we have had daily down pours so that has saved me!!
Hugs,
Deb
August 16, 2016 at 3:32 AM

LV said…
What a nice way to spend a day. High places and I do not work well together. Sometimes the people on the street are so talented but just do not utilize it well. Thanks for dropping by my place.
August 16, 2016 at 6:03 PM

Jeanne said…
Hello Jeanne Marie, We just drove through Cinti going to visit family in MI. We stopped overnight and ate Cincinnati Chili. We loved it!

It sounds like a wonderful time in the city with your pretty granddaughter Lauren. Love all your pics so much. Interesting about the couple lunching on the deck. I too love blown glass. My post is all about blown glass by Chihuly.

Sallie (FullTime-Life) said…
I'm grateful for small things too, but my gosh -- this was a BIG thing!! Time with your beautiful granddaughter, that amazing tower and meeting that amazing artist. I'm so impressed.
August 17, 2016 at 4:33 PM

Have a Daily Cup of Mrs. Olson said…
What a fun grammy/granddaughter outing! It's things like this that they will remember throughout their life!
hugs,
Jann
August 23, 2016 at 12:00 AM

FABBY'S LIVING said…
Oh wow, what a view!!! It reminds me of the view from the Empire State in my hometown NYC. I loved it so much my dad had to take us kids every other weekend.
Thanks for sharing what fun you had. Cute couple, the glass artist and his partner.
Hugs,
FABBY
August 23, 2016 at 11:34 AM

Isabelle Esteves said…
Looks like you had a great day and some great views.
September 1, 2016 at 3:33 PM

Annesphamily said…
You have lots of fun! I love your creative heart Jeannie Marie! I love those journals and your photos. Thank you for sharing.
November 6, 2016 at 10:01 PM