January 07, 2017
This post was begun last summer.  Mom and I used to sit and talk in the afternoons.   I was getting little snippits of information and I didn't want to forget them as I often did.    We always sat in her TV room to talk but she rarely dwelt on the past, she liked to talk about current news.  When I got her talking about the olden days, I added these nuggets as I heard them.

I was asking Mom today about her grandma and what she was like.  I've asked before and gotten some vague answers.  She always said her Grandma MacDougall (below) was stern and not given to spending much time with children. 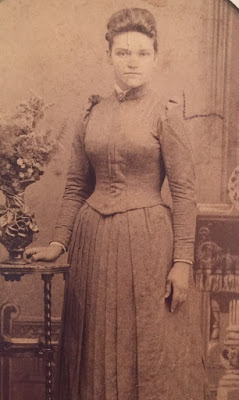 Today Mom told me, when her grandma was elderly, she liked her to come and visit because she would always give her a home permanent.  My mom was good at it and she liked to give them. (she went to beauty college)  I well remember getting one most summers while growing up.  I do remember my great grandmother always having short curly white hair.

My mom, Joanne said she had a very nice relationship with her Grandma MacDougall, even though she was stern with most children.  She loved spending time with her.  She also said her grandma only really scolded her once that she can remember.  It seems that there was a large hole where a house used to be down the street but was now just a foundation and the remains of a basement.  My mom was walking on the foundation "wall" and her grandma saw her and came and scolded her soundly and took her home. She was admonished that she could easily fall into the pit of the basement.  Joanne thought it was a bit silly as she felt confident walking on the foundation wall, but didn't do it again.

They used to spend time in the garden and pick vegetables.  She remembers shelling peas on the porch together.  Her grandma would tell her that she always ate more peas than she shelled!

A family story was told often, about the time my mom, at about age 5 or so was staying with her grandma  MacDougall and she came in the bedroom when they were both getting ready for bed and her grandma turned around with her teeth in a glass of water and little Joanne ran out of the room scared to death.  The family enjoyed that story for years!

One thing they used to do together was Grandma would try to teach little Joanne to make hankies.  Each hankie had to be cut and hemmed and it was her grandma who taught her how to do it.   Joanne says she was never very adept at it.  It was an uphill job for both of them, as teacher and pupil.
I have a hankie I believe she made, I'll try and get a photo of it on here.

I asked if she ever read to her, Mom said her grandma didn't have any children's books but probably read her the Bible.

She used to stay with her grandma sometimes all alone, without her brothers and sister and she liked to be there..... except at night.  It was kind of scary for her at night being alone.  There was no electricity so the rooms were dark even in the day time.  Joanne remembers the kitchen had a pump and a red checkered tablecloth on the table.  She thought the stove was an oil stove but doesn't quite remember it.

The neighbor across the street was an aunt or a cousin of her mothers.  She would often ask Joanne over when she was a small child and give her cookies and milk.  Joanne said it was a real treat to have.  This was the Williamsburg Michigan house.

One time her mom had a surgery and her grandma wasn't up to having both Joanne and the two boys (Jerry and Wayne) as they were a real handful.  Joanne really missed them, but they were boarded out to neighbors down the street and they worked on the farm for their keep.

My mom said her sister Betty usually stayed with the other grandmother, who doted on her because she was the oldest and the favorite.  That would be Grandma  Gerker.  (Originally Grandma Kuhlman but she was Gerker when my mom was growing up.)  She spoke with an German accent although born in Ohio, because her parents were Prussian immigrants.  She was the lively grandmother, always jolly and loved to play cards, especially Hearts. She was always cooking and baking and producing delicious foods during their visits.  She used to exclaim Gott in Himmel when she was surprised.

Grandma Gerker  with her sons and her daughter in the early 30's?  My grandfather is on the far left looking  a little like Gregory Peck! 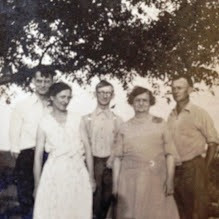 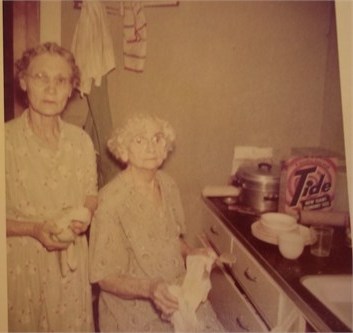 This ends what I now know about them as Mom is gone now.  Unless  a memory surfaces.  I did know and spend time with my great grandmother Mac Dougall but her name was Hendricks by that time.  So we knew her as Grandma Hendricks.  Mom did not like her husband.  She avoided him.  There are some photos of her going to New York on a trip with them and her mother.

Rebecca said…
How wonderful that you asked about and RECORDED these memories! I enjoyed reading them....♥
January 7, 2017 at 10:16 AM

Isabelle Esteves said…
Actually, in genealogy terms you know quite a lot. I never knew even my grandmothers and my mother was the youngest child in her family and both her grandmothers died before she was born so we have nothing. I m so sorry about your loss, I know how close you were. See you soon I hope.
January 25, 2017 at 1:35 PM