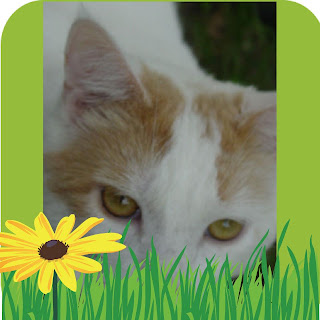 Our cat, Mohawk has just amazed me once again.  He is already known for surviving his early abuse so many times the vet who treated him named him Lazarus due to the many times he came back from the dead the first five months he kept him.  We adopted him when he was six months old and he came to live with us for a very long uneventful period of time.

Then a few years ago he surprisingly reared his head and refused to let a stray kitten come to live with us. It was all about Mohawk for awhile.  The stray cat, whom we named Bengal,  was adorable.  It became pretty stressful after we rescued her and brought her back to health.  Mohawk was adamant that Bengal would have to go.  We reluctantly found little Bengal a home and luckily get updates fairly frequently. 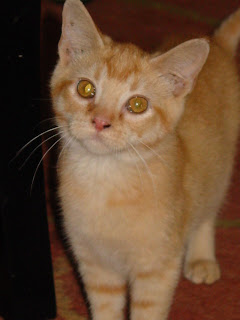 Last year he again cheated death.  The story is "here" in my blog and I won't repeat the harrowing months he endured due to his perchance for sneaking outside every chance he got.  You can read it at your leisure.  You won't believe it, but I swear it's true.

So once we got him to Florida,  he loved to go in and out at his leisure.  From the house to the covered and screened patio.  During the cooler months, it was fine to keep the door open and let him have his way but when the intense heat and humidity pressed us, the door had to remain closed but Mo preferred it outside anyway. 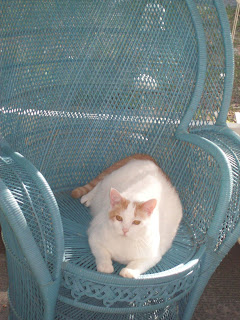 I noticed he was getting actually dirty by spending so much time out of doors.  I brushed him and that helped but yesterday, when inspecting him closely I decided it has become necessary that he must have a bath.

As far as I know, in his long life he has never had one.  I didn't know anything about bathing a cat.  After looking up tips online, we armed ourselves fully.  I had duct tape ready to cover those claws if absolutely necessary.  We cleared the counter of all things breakable or not.  We filled the sink ahead of time with nice warm water and geared up for the big struggle.  Mohawk is a BIG cat.  The guy where we board him  when we travel calls him The Gentle Giant.  He has a sweet nature, but I have heard stories of trying to bathe an older cat and I admit I was a bit nervous.


But he didn't fight us at all.  We were stunned.  He allowed us to place him in the deep sink full of warm water and bathe him.  Not only that but he appeared to like it.  He leaned into my hand that was rubbing in the cat shampoo.  He was relaxed and enjoying all the attention.  He was PURRING the entire time.  We washed and washed him.  We even used the sprayer to rinse him and he didn't protest.  We rinsed forever.  Well, at least for about 30 minutes.  The water became cooler and he moved away from it, so we adjusted it to that nice warmish/hot spray and he relaxed again.  I'm confident every bit of the shampoo was rinsed off. 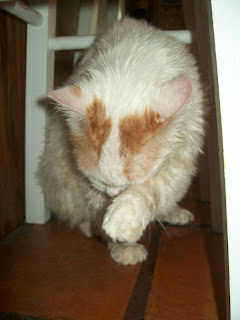 After toweling him dry he washed his face and paws and then fell asleep in the chair.
Later after he was all fluffy again he began grooming Gracie, our Black Lab, who was all upset over all the attention Mohawk was getting.  Really Mo?  Gracie is six times your size and is NOT a cat.  You are supposed to be traumatized and need comforting not the other way around. 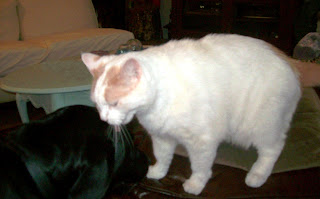 You know it's just kind of spooky. 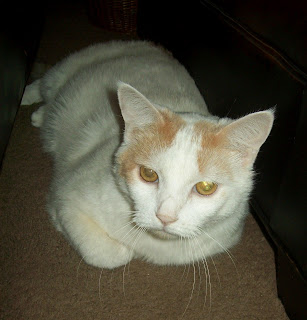 What will we discover next about you?

Unknown said…
I did read both stories and REALLY enjoyed them. I once had a cat that adopted me and loved her so much just as you do your sweetie. You are a wonderful writer and it is easy to get lost in your stories because they flow so well. Have a wonderful week.
August 28, 2012 at 10:13 PM

Debbiedoos said…
Animals truly touch our lives and bring so much joy. Thanks for sharing your story with the newbie party.
August 29, 2012 at 8:26 AM

Little Susie Home Maker said…
Awe, how sweet! He loves his bath! That is so wonderful. Far better story than "look at the blood running down my arms!" Yes, He is such a good boy! Pets are so funny I love all the funny ways they surprise us!
Blessings,
Susie
August 29, 2012 at 12:03 PM

Heather@Tatter and Fray said…
Awww, how sweet! I am more of a dog person, but I just love those giant "fat cats." What good owners you are to even attempt a bath! So glad he enjoyed it...I wish my dog would behalf half as well at bathtime! :)
August 30, 2012 at 10:28 AM

Betsy@My Salvaged Treasures said…
What a sweet story. Mohawk is huge, just more of him to love. We had out cat for 17 years and only gave him a bath twice, both times were after he was in a fight and needed to be cleaned up. He always smelled so good and the dog really needed to take a few lessons from him.
September 2, 2012 at 4:28 PM

must love junk said…
Jeanne, thanks so much for visiting my blog and leaving your sweet comment! I'm happily following you back :)
Susan
BTW, I LOVE your cat!
September 2, 2012 at 6:12 PM

Whimsy and Juno said…
Haha awww what a sweet little fella! He looks like he would be great to cuddle- like a big fluffy marshmallow! :)

Chenille Cottage said…
I have never met a kitty that I didn't love! Your Mohawk is so beautiful and has such aa unique personality.
I'm so glad you shared!
Blessings,
Carolynn >^^<
September 5, 2012 at 12:37 PM

Home Design said…
Hello! I just would like to give a huge thumbs up for the great info you have here on this post. I will be coming back to your blog for more soon. Home Design
September 18, 2013 at 3:35 PM