Crusin' Again on the Carnival Splendor

April 08, 2015
Spring break and my annual visit from my eldest daughter and her family took a new twist as we cruised together on the Carnival Splendor for a seven day trip to the Eastern Caribbean.

This is about the very first day and a little bit of exploring on this amazingly beautiful ship!

A little bit of background...We had an opportunity to go with my brother in law and his wife on a cruise.   He worked for Norwegian Cruise Lines and gets a killer employee rate for himself and all who cruise with him.    We had a cruise lined up with the Norwegian Epic and seven days before we left, there was a massive shake up as NCL merged with another company and my brother in law lost his job along with more than 63 others.

There was a mad scramble to find another cruise in the same time frame during Spring break!  Yes, the ships were sold out everywhere.  We paid almost three times the price but landed the last two cabins in the Carnival Splendor.  Since my brother in law was now looking for a job he and his wife decided not to cruise this time and it ended up just the five of us.

We also scored an additional port, visiting four countries instead of thee and better news, three of them were new to all of us.  We went to the Bahamas, The Virgin Islands, Puerto Rico and Grand Turk.  It was a wonderful trip.


SO!!!  Here we all are!  The traditional start of the cruise photo!
My grandchildren, Lauren and Ryan, me and my daughter, Dianne and her husband Chris 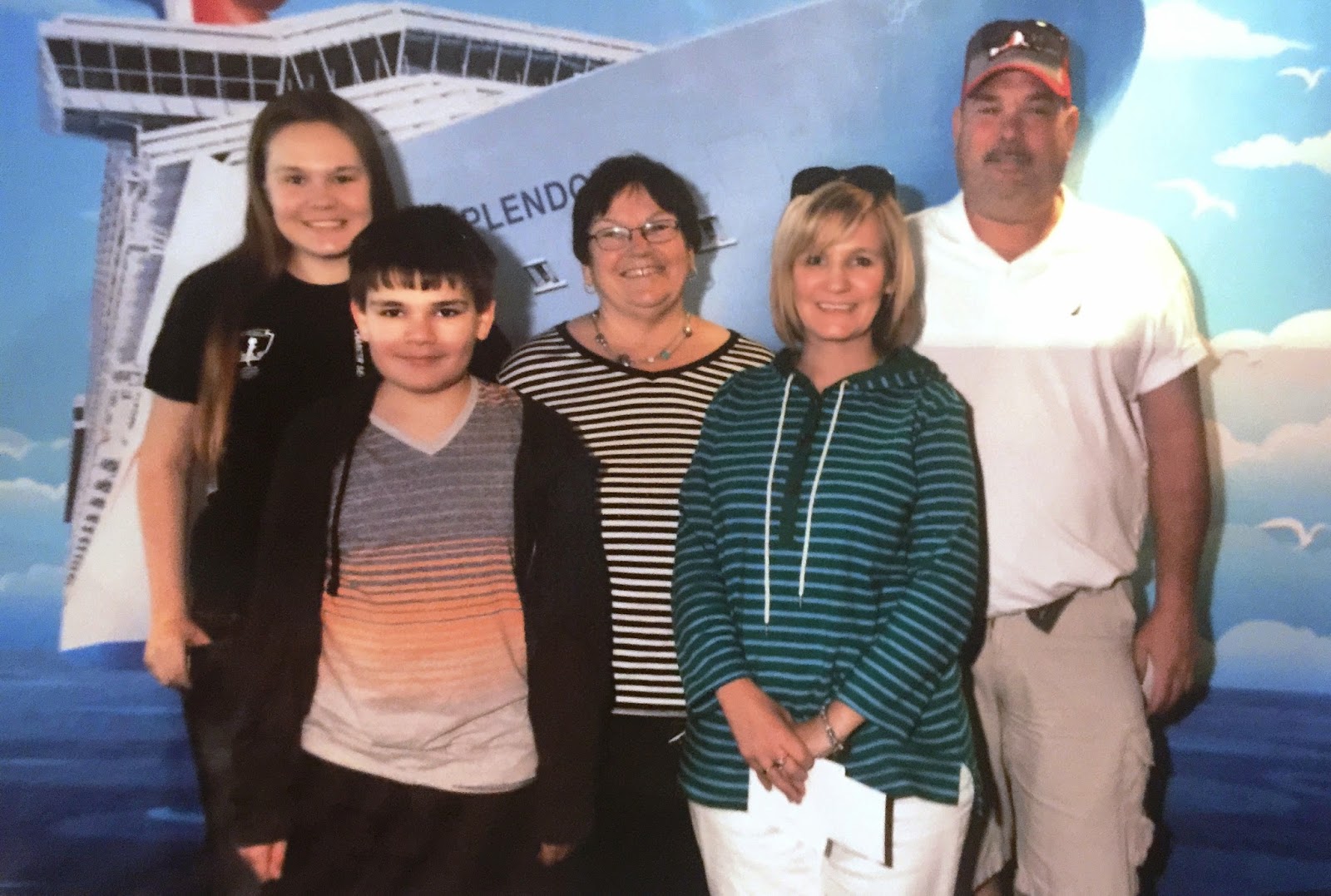 The kids were happy to explore after a great lunch when we first got aboard.  We always arrive as early as possible so to be one of the first wave of cruisers allowed onboard.

The first thing you want to do is go to the buffet and get your lunch.  It's not crowded that early and you get a wonderful lunch right off the bat,.  Don't linger here, because everyone is wanting lunch so after you are finished (not rushing) this is the time to explore the ship on a full tummy!

Here the kids wanted to go to the highest point on the ship.
They loved the sights and sounds! 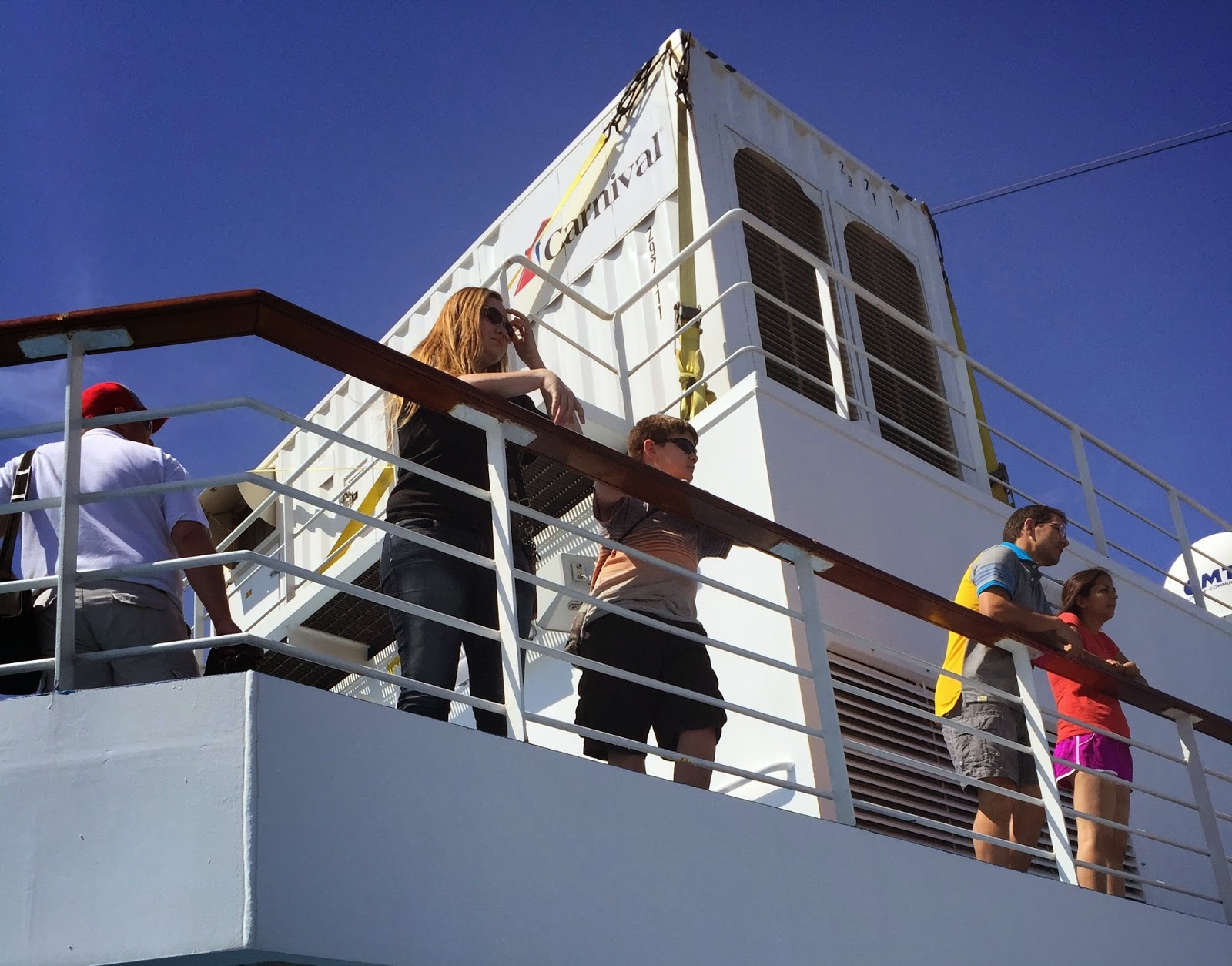 We took a quick tour and then went to unpack before the sailaway party.
It only takes a few minutes to get everything stowed away and then you are done with
that chore and the rest of the vacation you can do what you want!

Outside waiting for the sailaway!  In the photo above Ryan and Lauren and Chris on the deck above
Dianne and I below, loving every minute! 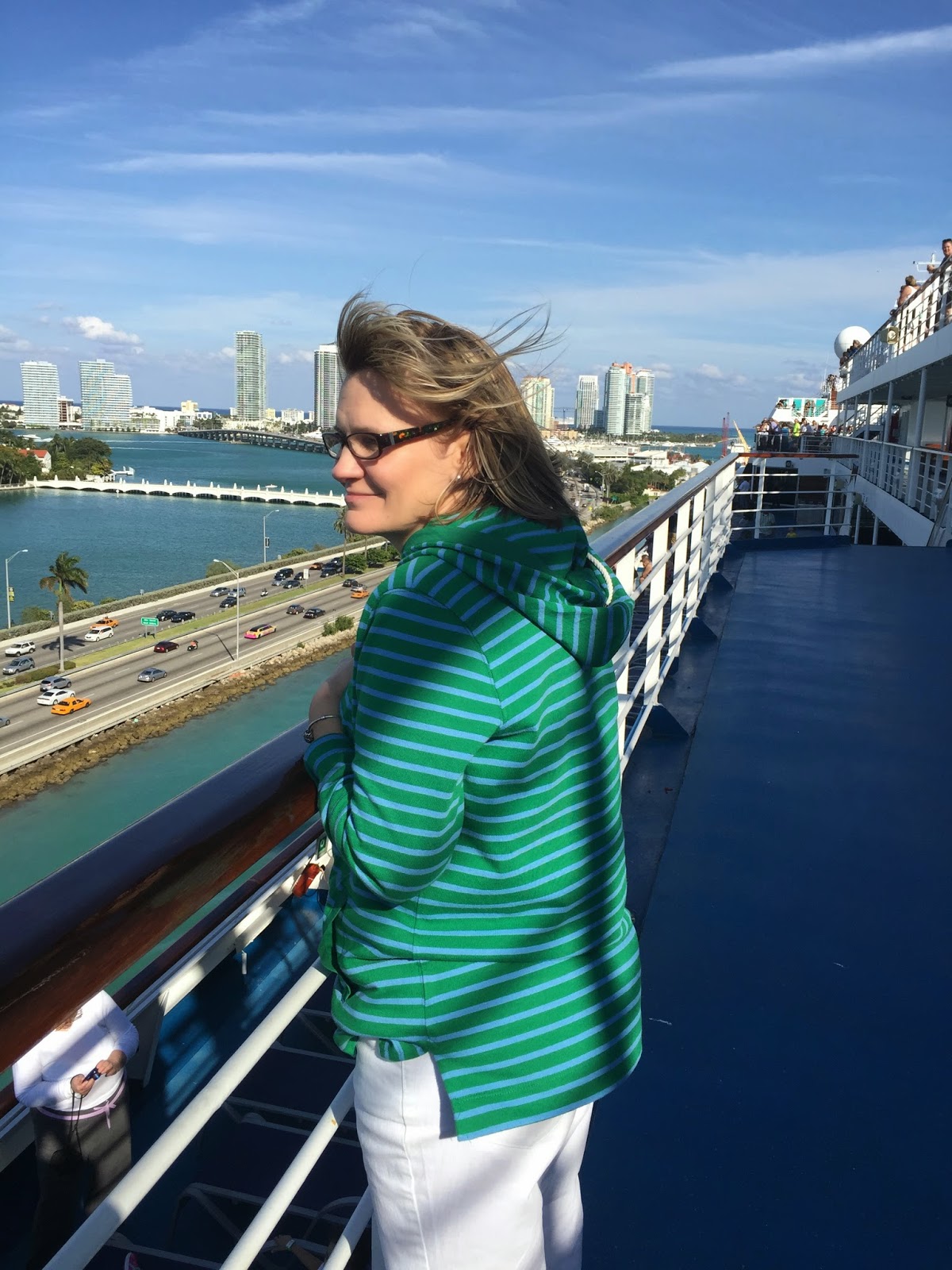 It was quite a surprise to see the Norwegian Epic just ahead of us!  The ship we almost sailed on!

There are people already filling the pools and hot tubs, but I like to save that for later.  Hot tubs are the most fun late at night! 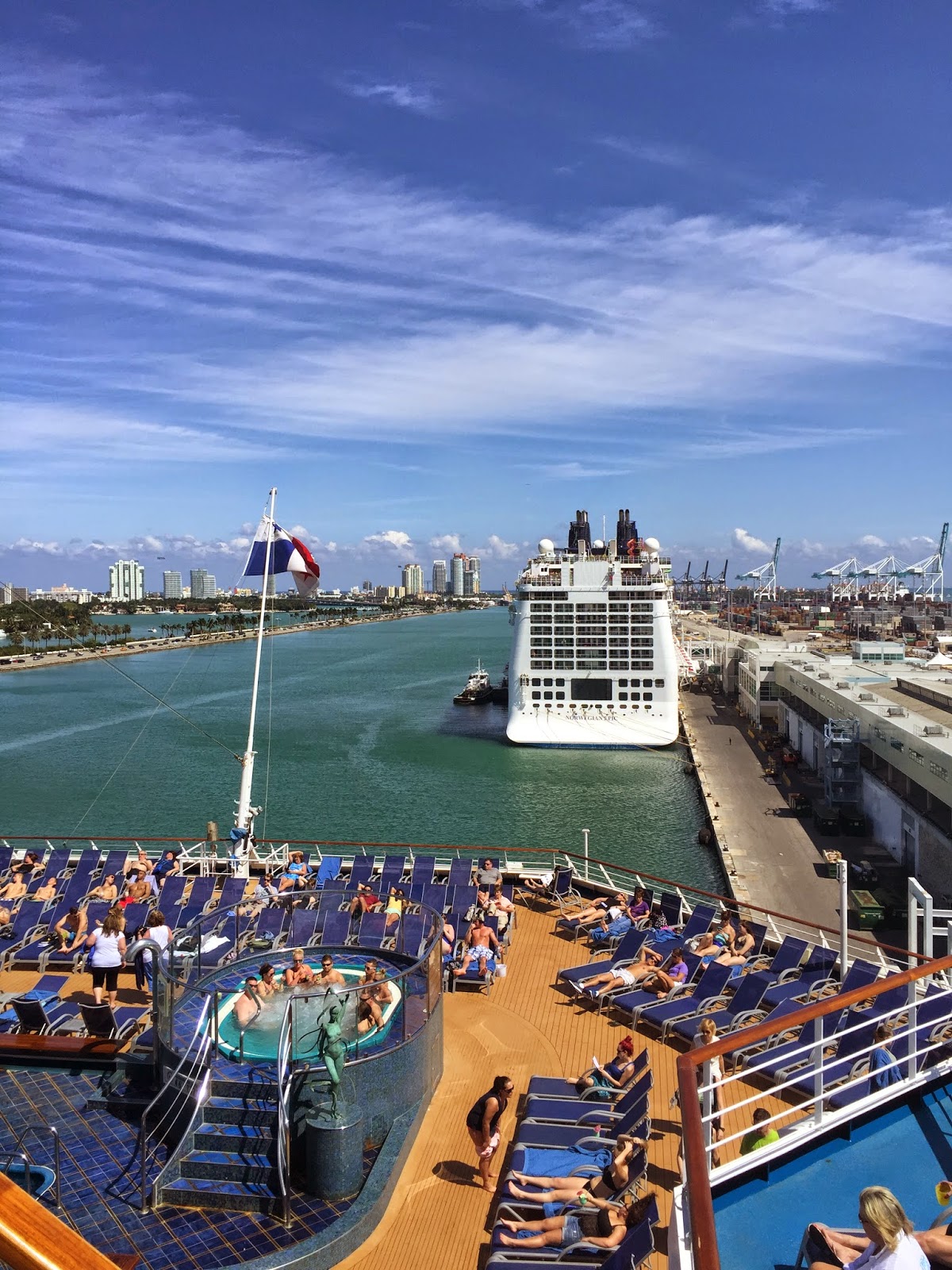 I stayed with the grandchildren so our cabin was in a different area.  We were the first arrivals for the lifeboat instructions, so it was a long wait.  We were not underway yet so the phone was still on. Once underway we all enjoyed seven blissful days of no phone service! 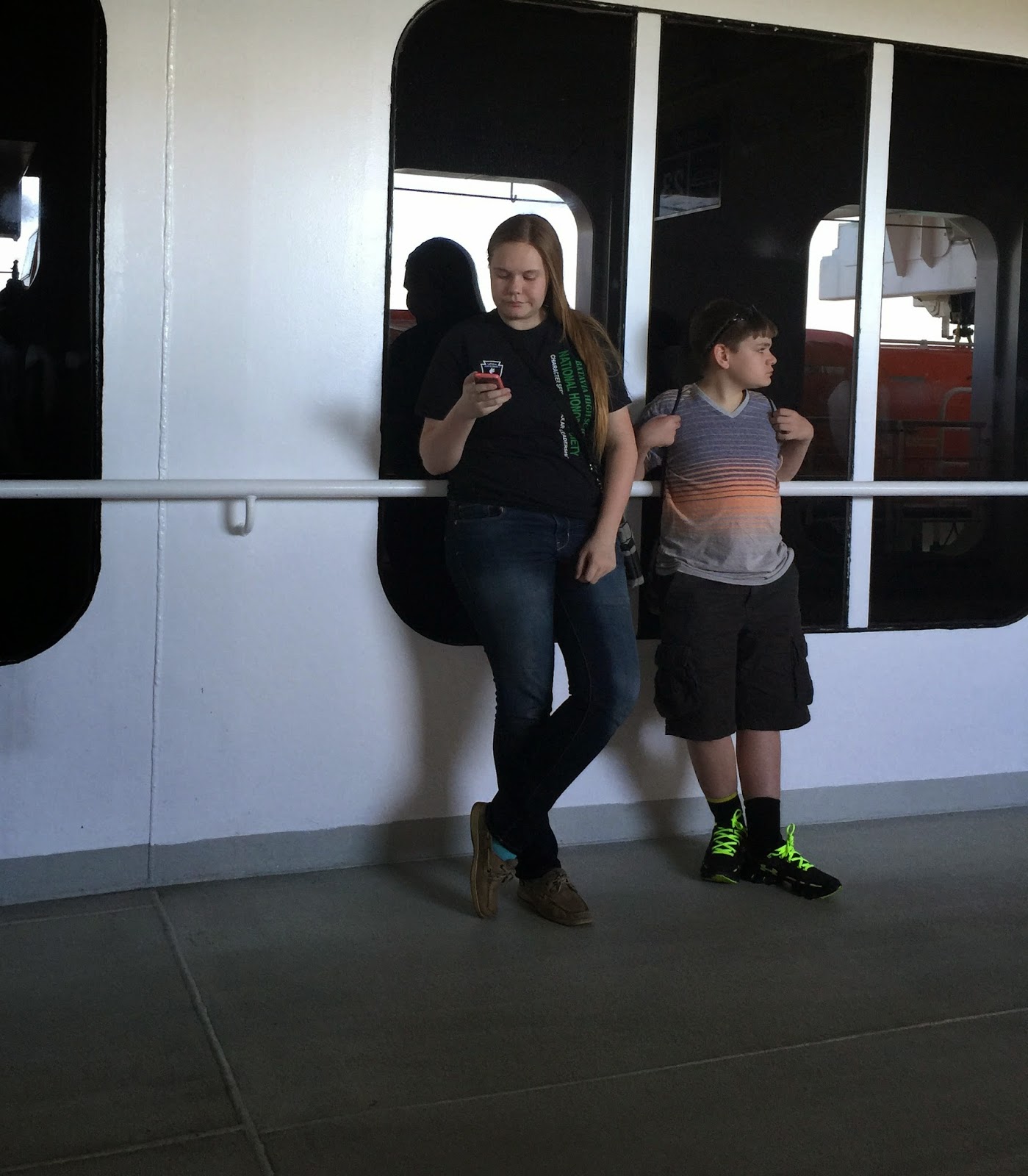 The sailaway toast!  It's a tradition and they offer the best deal of the cruise for this drink.  The waiters are everywhere and it's easy to beckon them over! 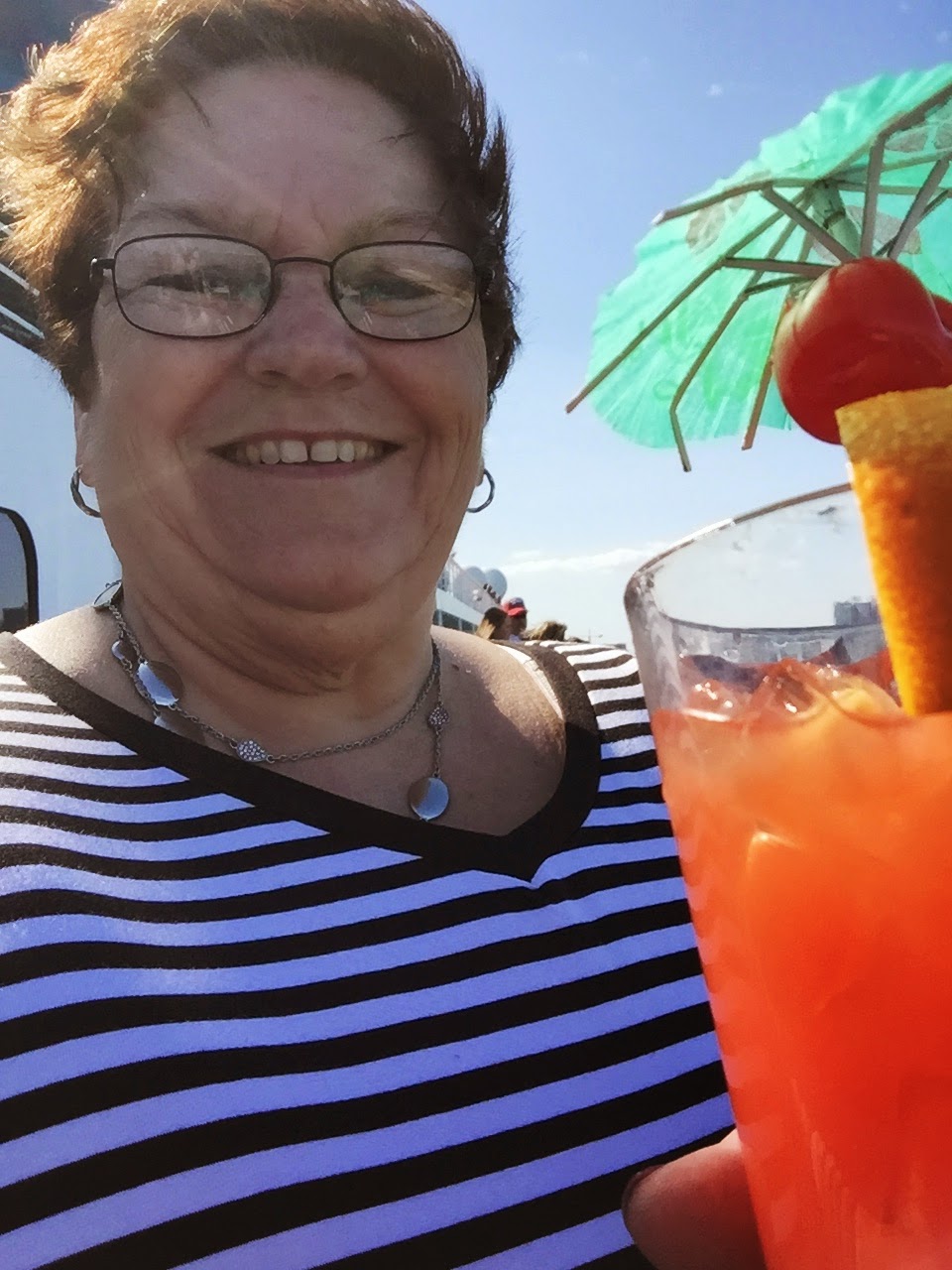 It's a beautiful ride out of the harbor past all of Miami.   A great shot! 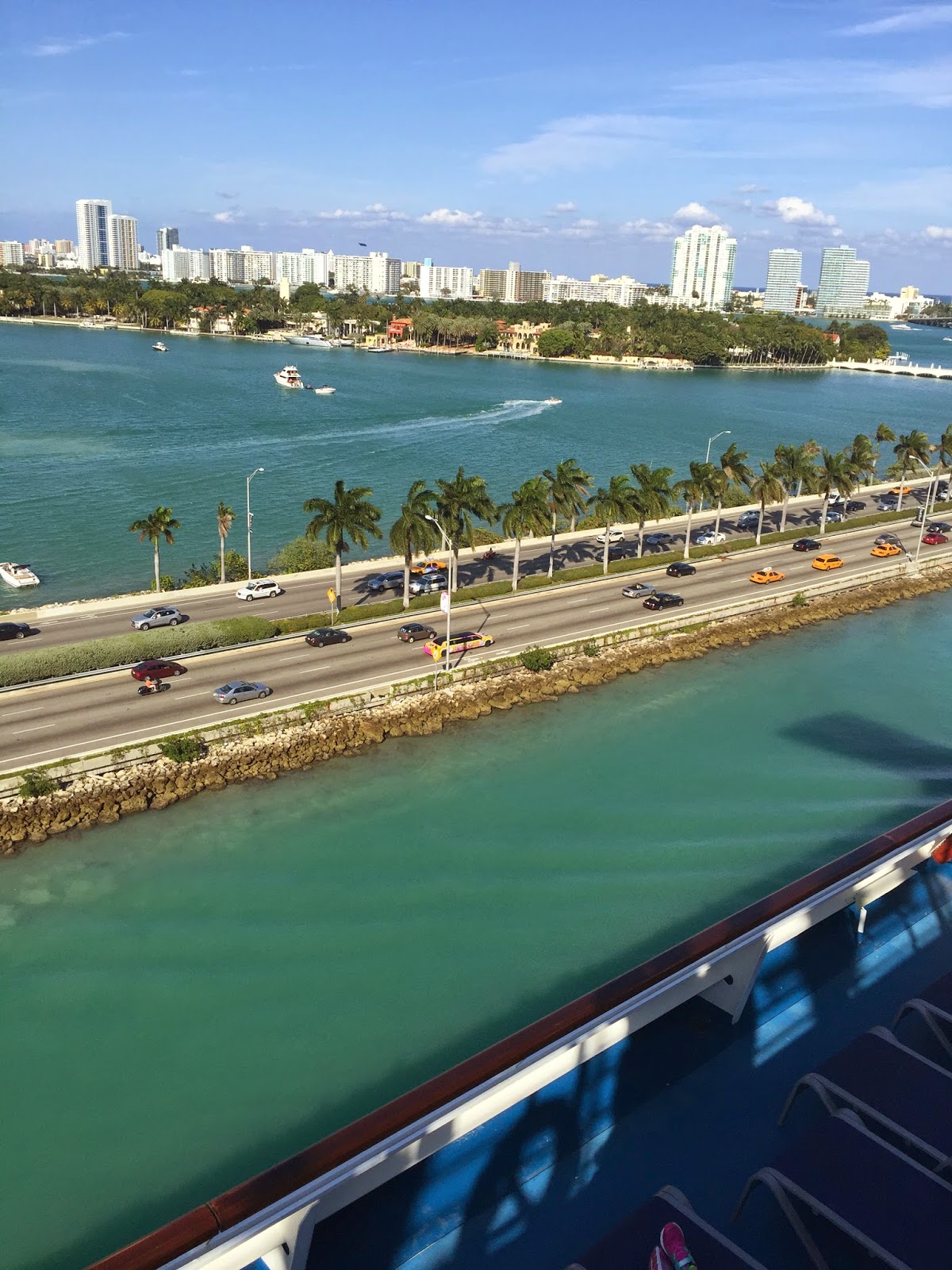 When we walked inside the ship the inside was so...so...bubbly it was a bit of a shock.  Everywhere the ship was very PINK all over!  This photo was every floor all all three elevators per floor!

I have never seen such a pink ship!  Then I sailed on the sister ship that was decorated all in purple. 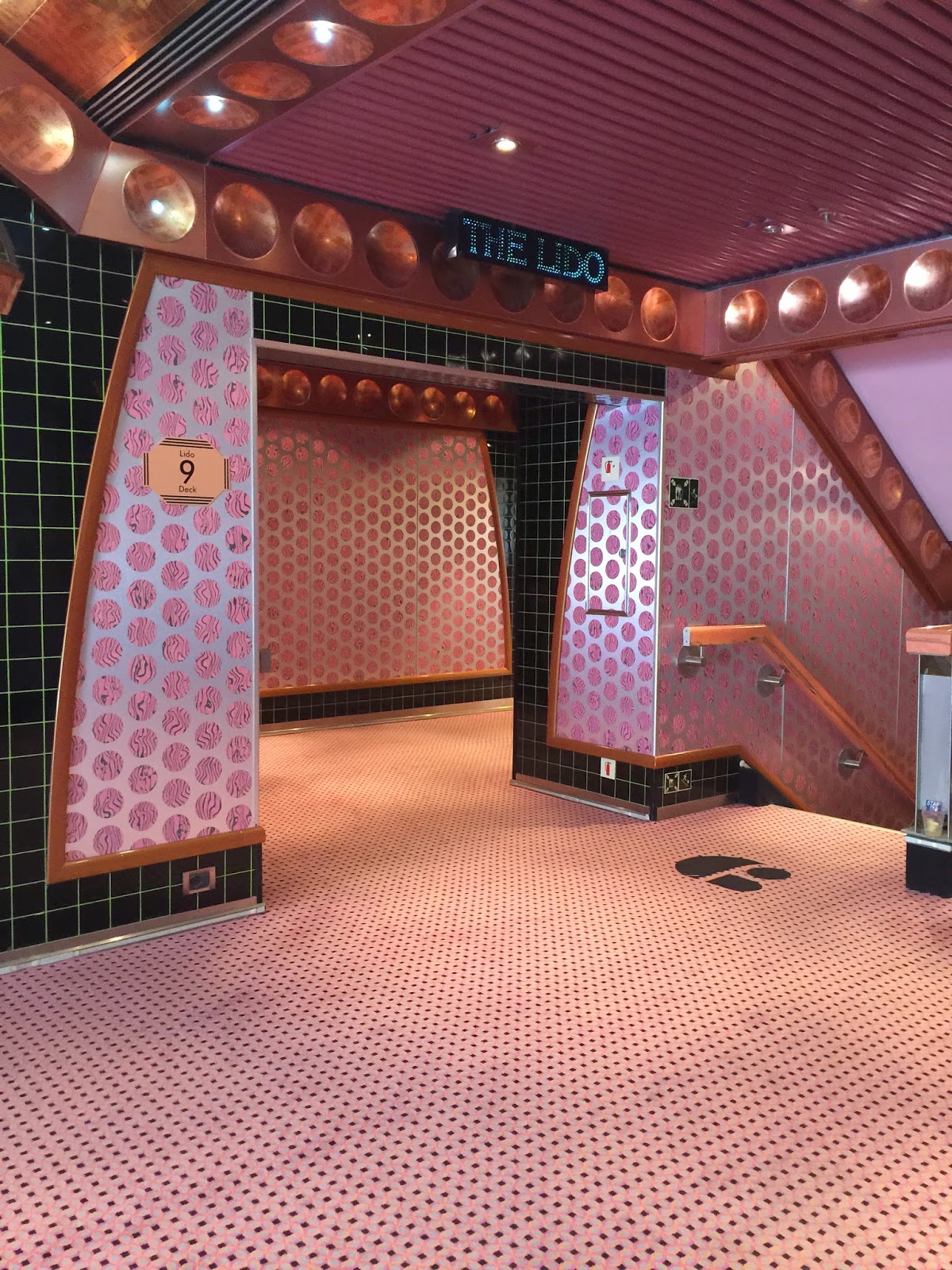 Even the pool area was bedecked with pink flowers and pink accents! 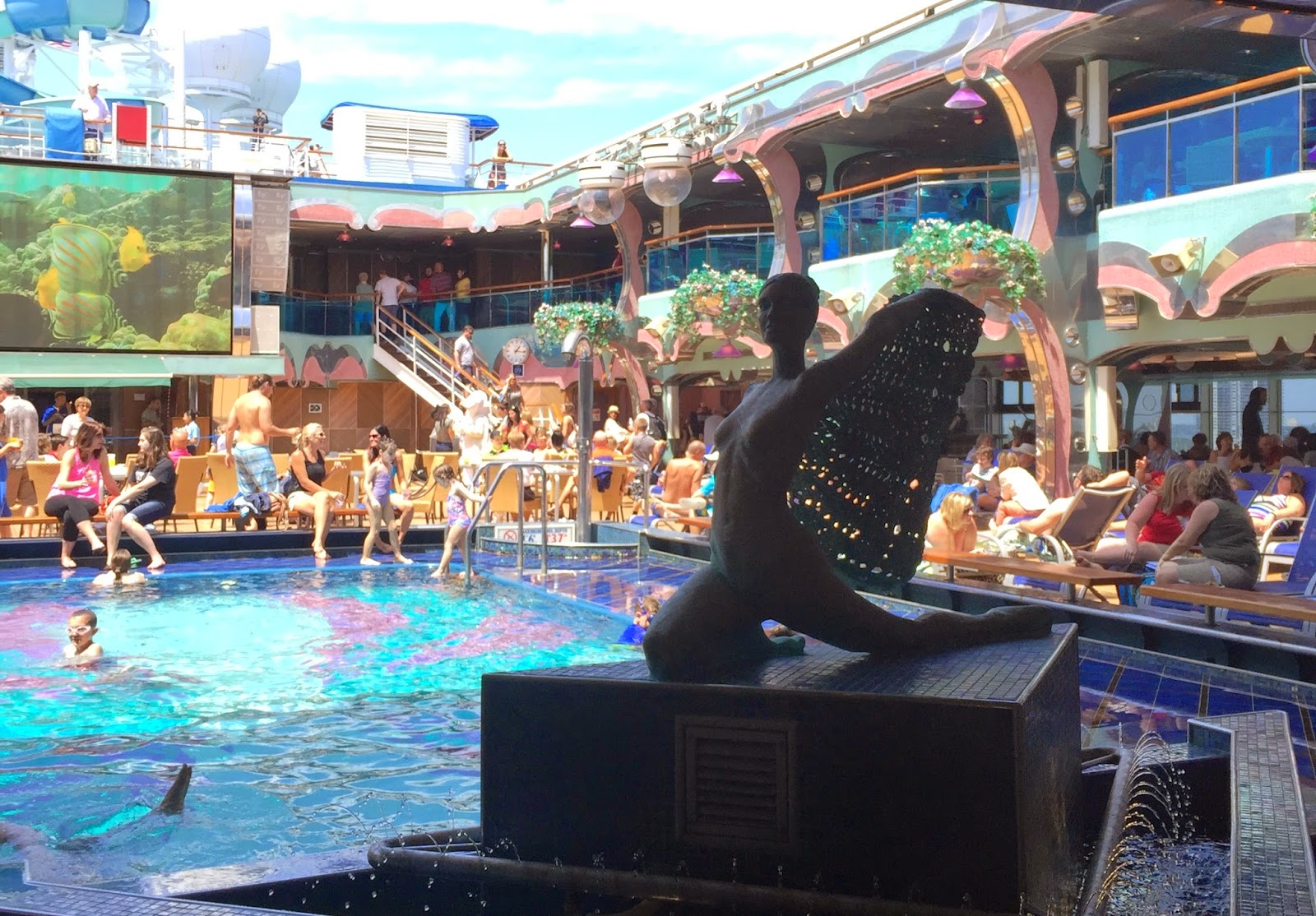 The inside cabin on the Carnival Splendor was even pink!   It was pretty nice and plenty roomy for the three of us, with twin beds and a bunk that folded down over this bed.  I especially like the really roomy shower. 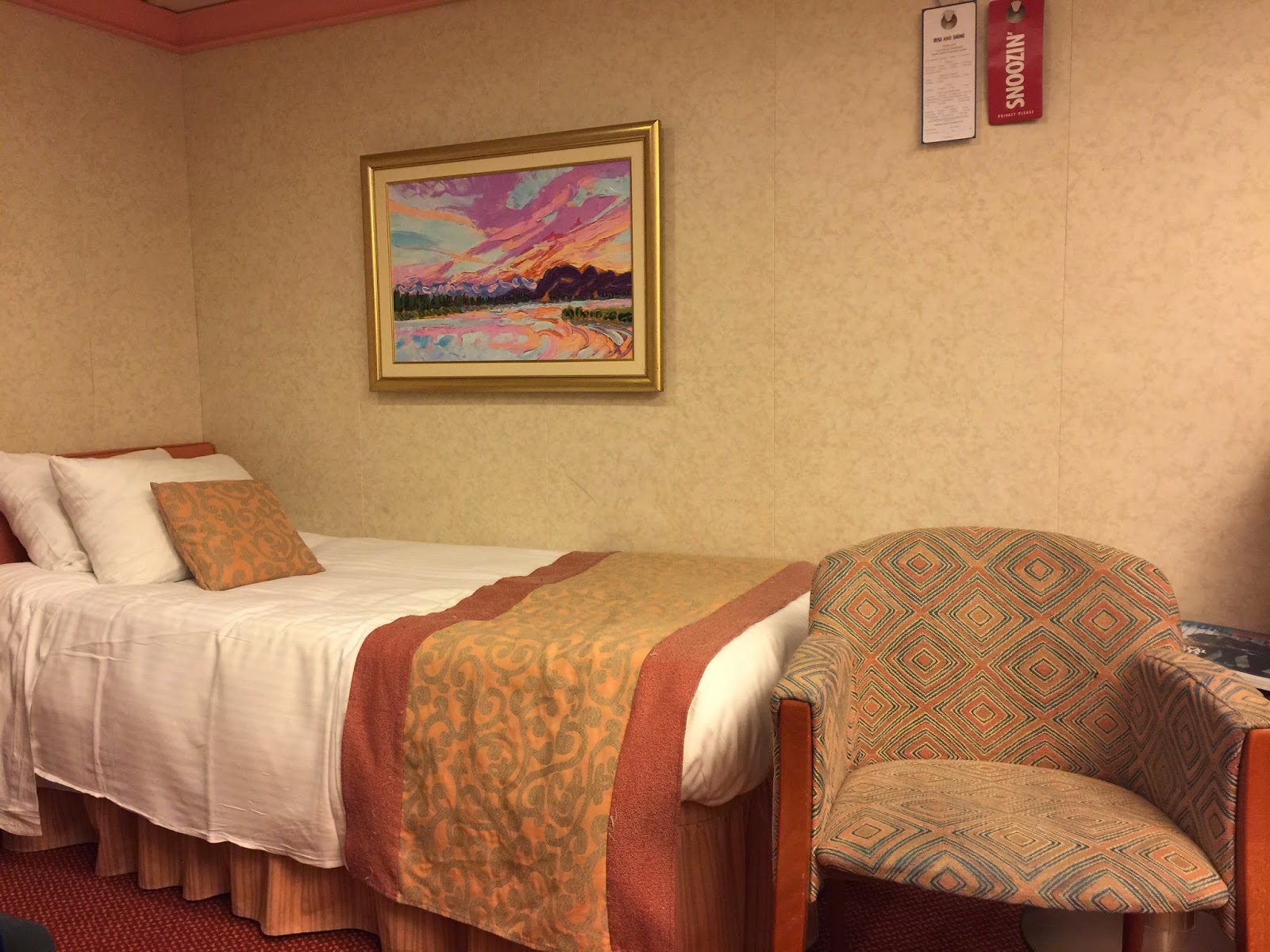 It was a great start and for the next few posts I'll take you along with us on our fun family cruise!

Cheapchick said…
I am sorry about your brother in laws job but glad you got to get away - can't wait to see your pictures!
April 9, 2015 at 3:11 PM

Unknown said…
What a beautiful place! Looks like you had a wonderful time. :) I can't wait to visit Sanibel again. I've missed it since the day we returned.
April 9, 2015 at 10:53 PM