The sail into port was beautiful!
It's hard to imagine anything bluer! 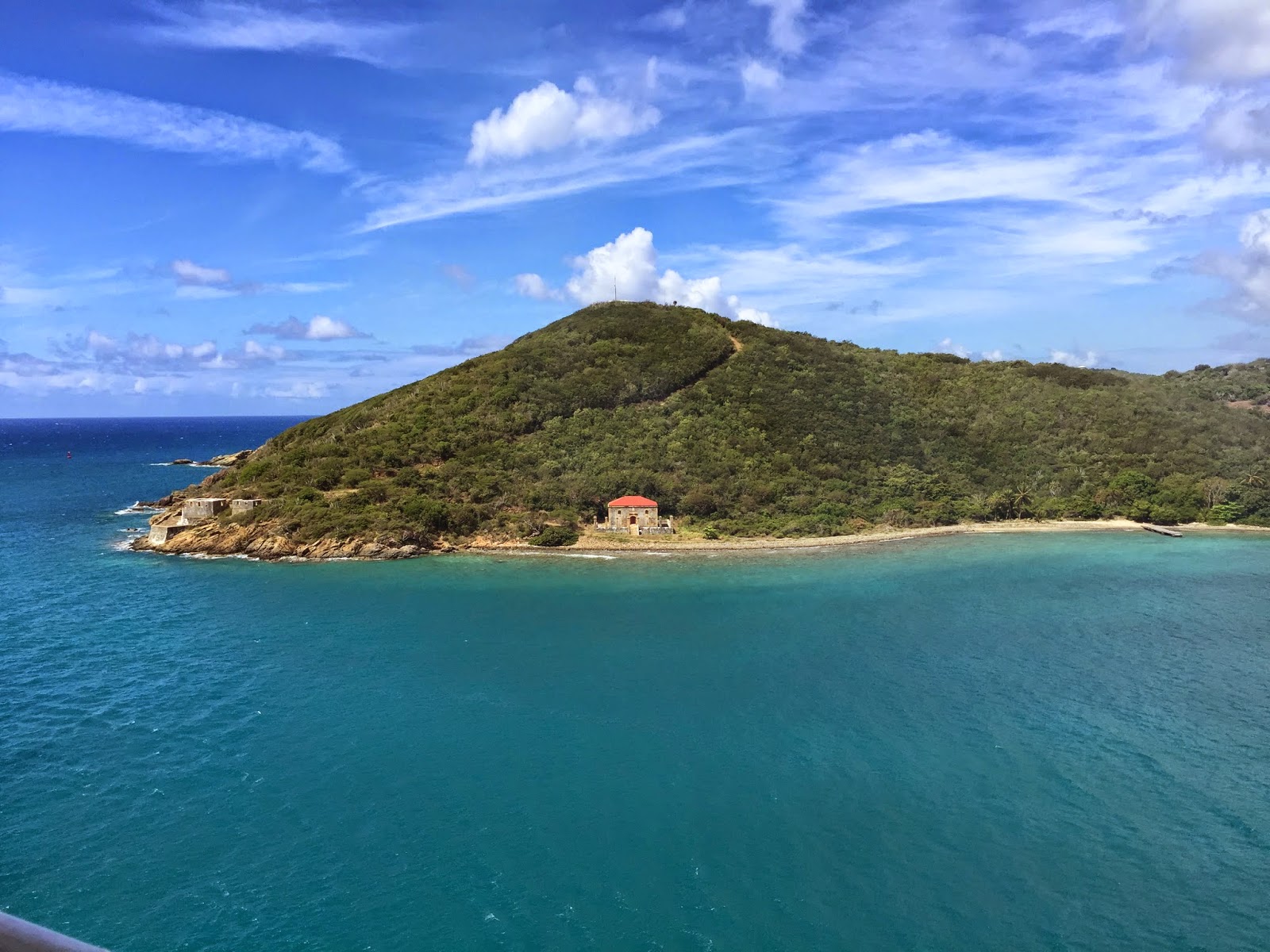 Turquoise blue waters and the hills starred with cottages. 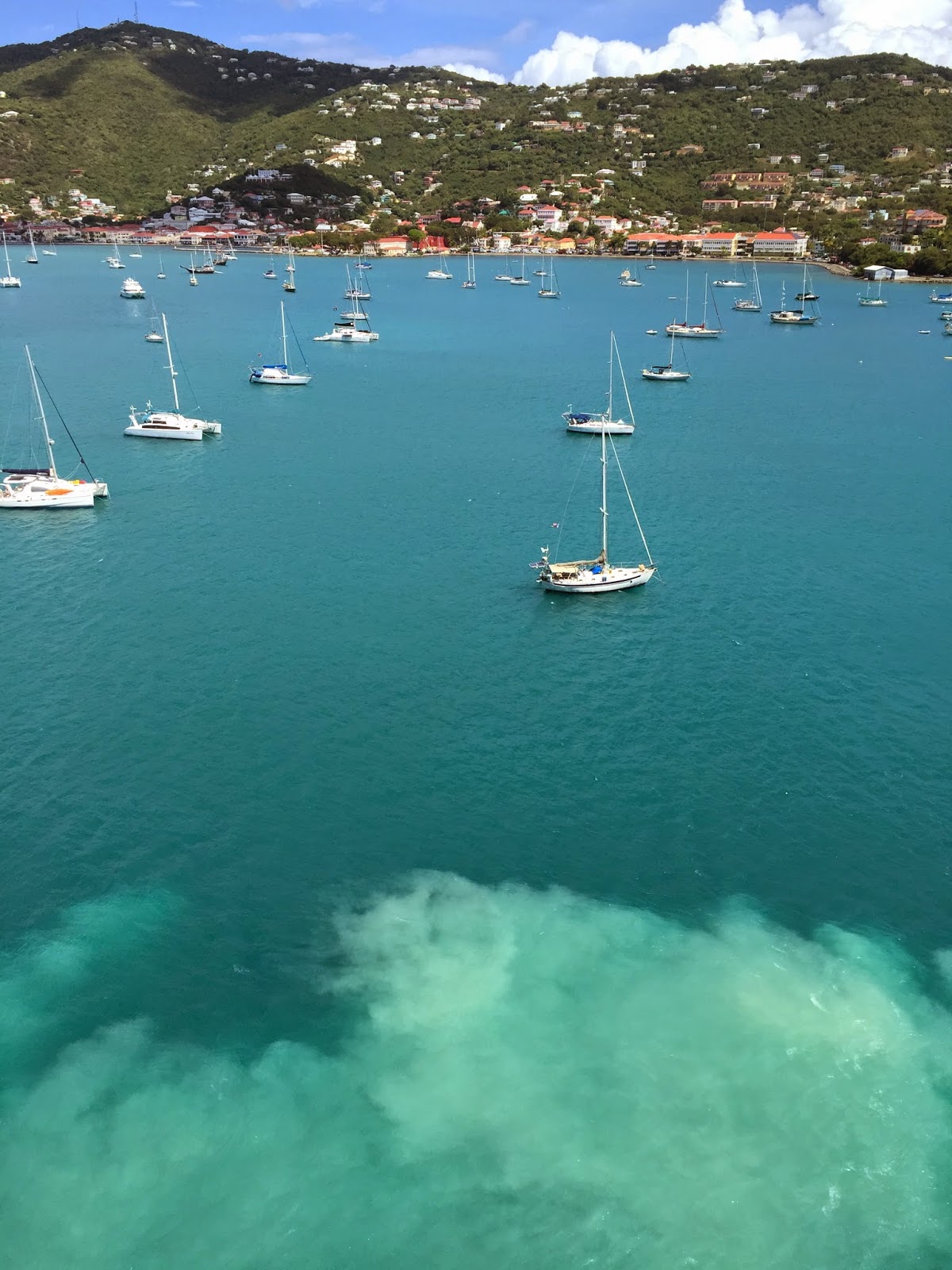 We did a bit of shopping, (Dianne's hat was purchased!) at the port shops. 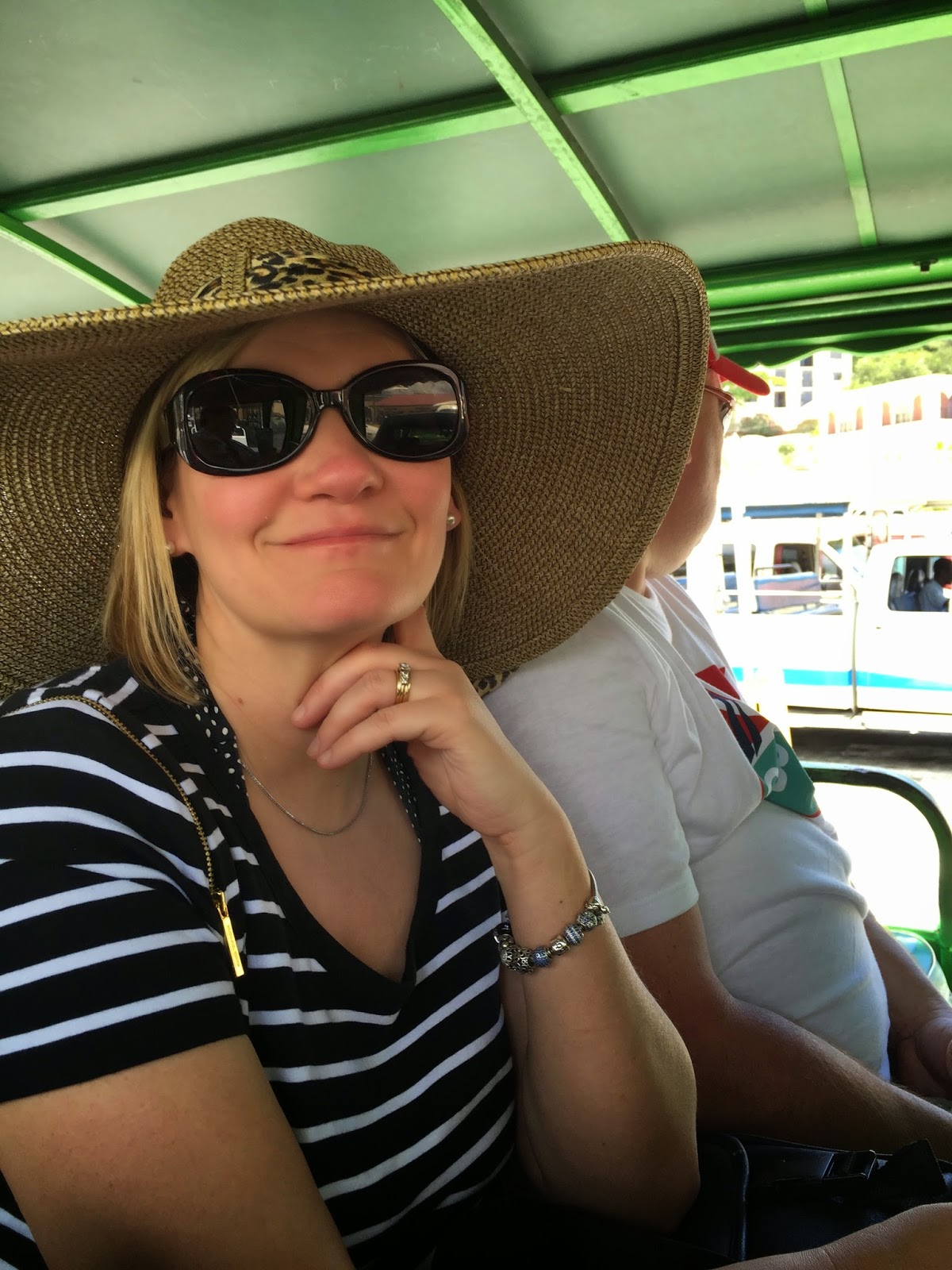 .  We were all in high spirits in the taxi we hired to take us swimming at Magens Bay! 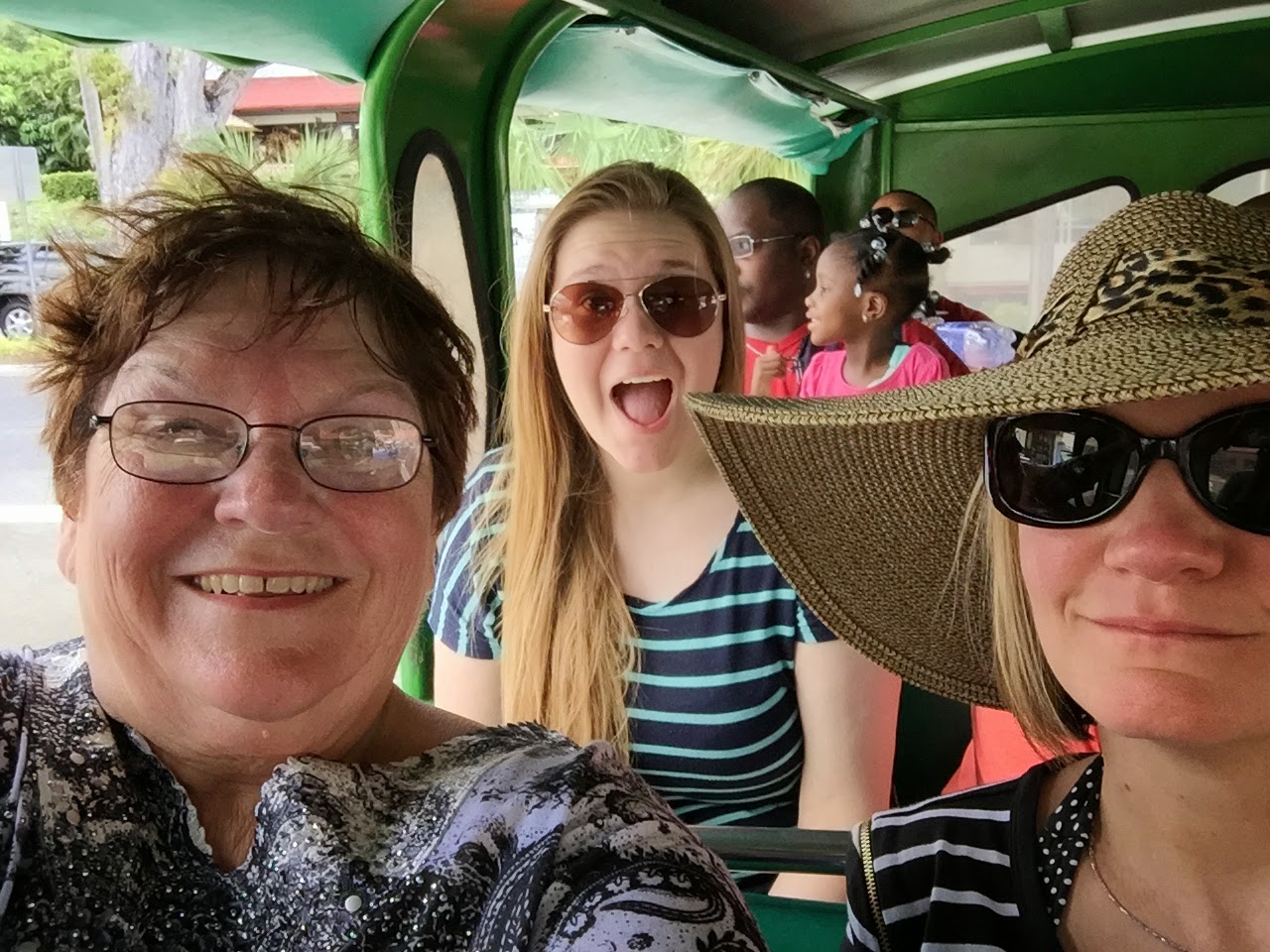 The taxis were large and cumbersome and passing each other at top speed up and down over the curvy mountain road... making the drive crazy. 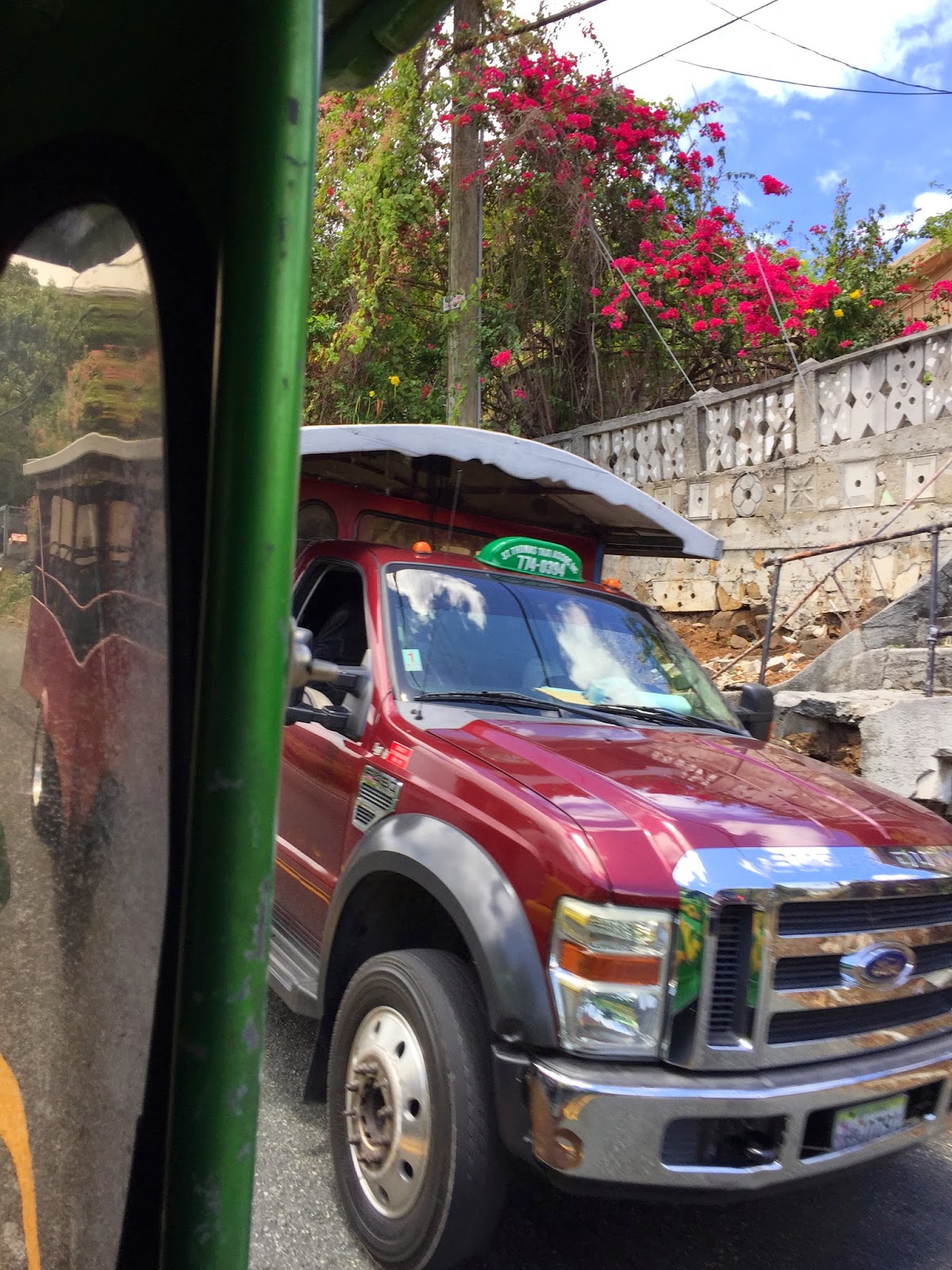 It was a beautiful drive and quite steep going over the mountain to the other side of the Island. 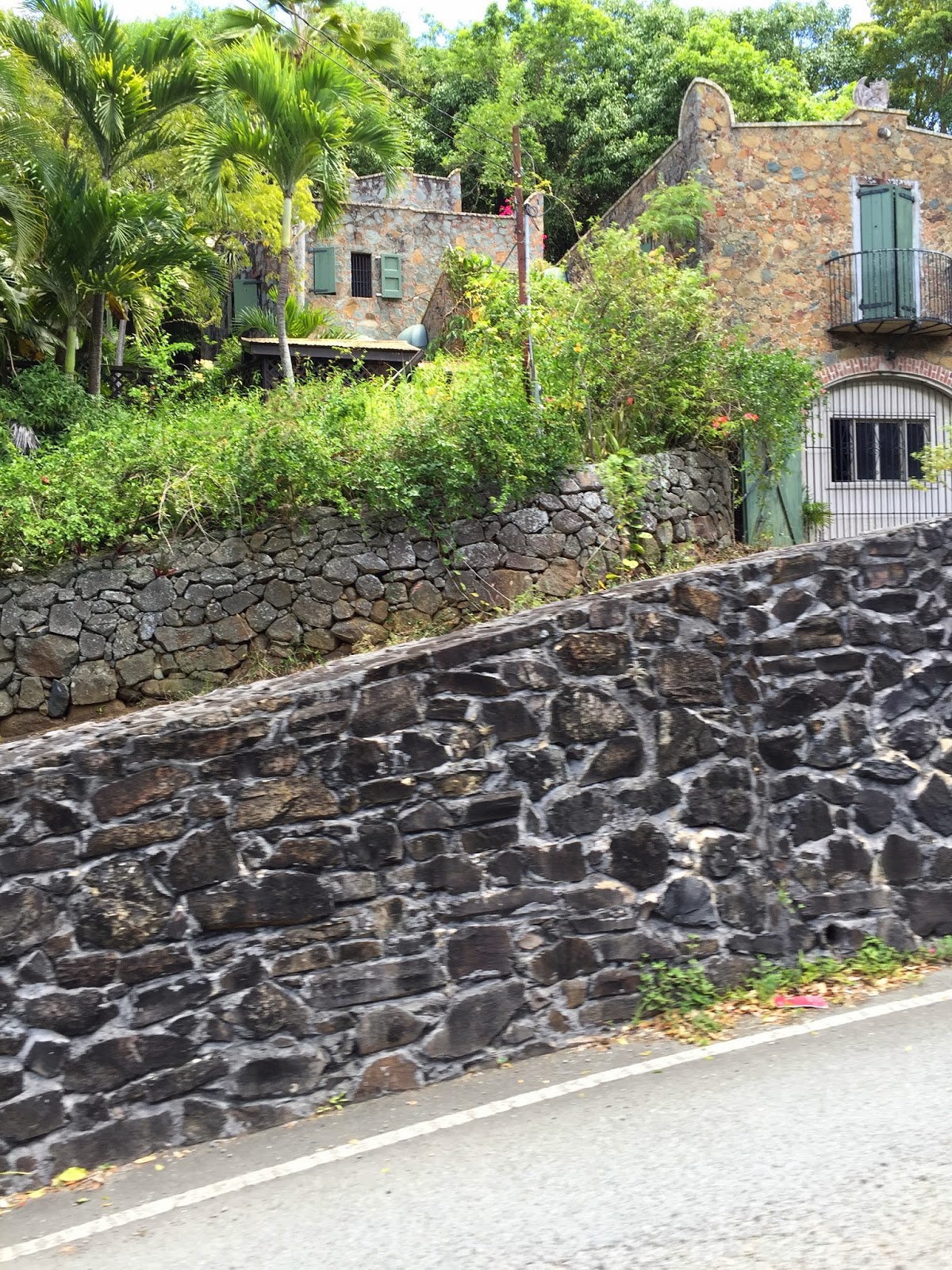 It was worth it though, the bay was beautiful!
It was nice to find trees casting shadows on the beach. 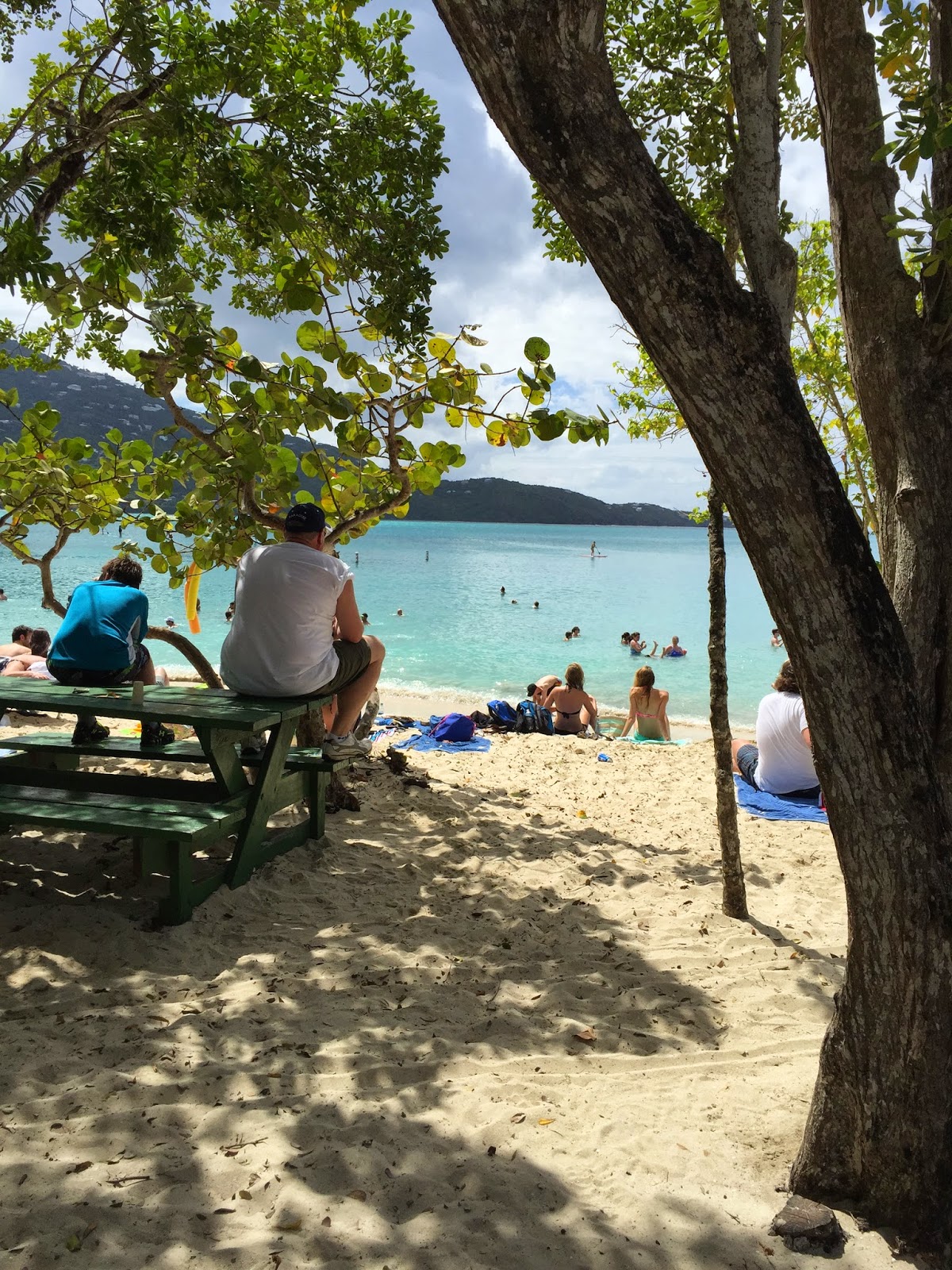 We had a lovely afternoon in the soft sand and beautiful water! 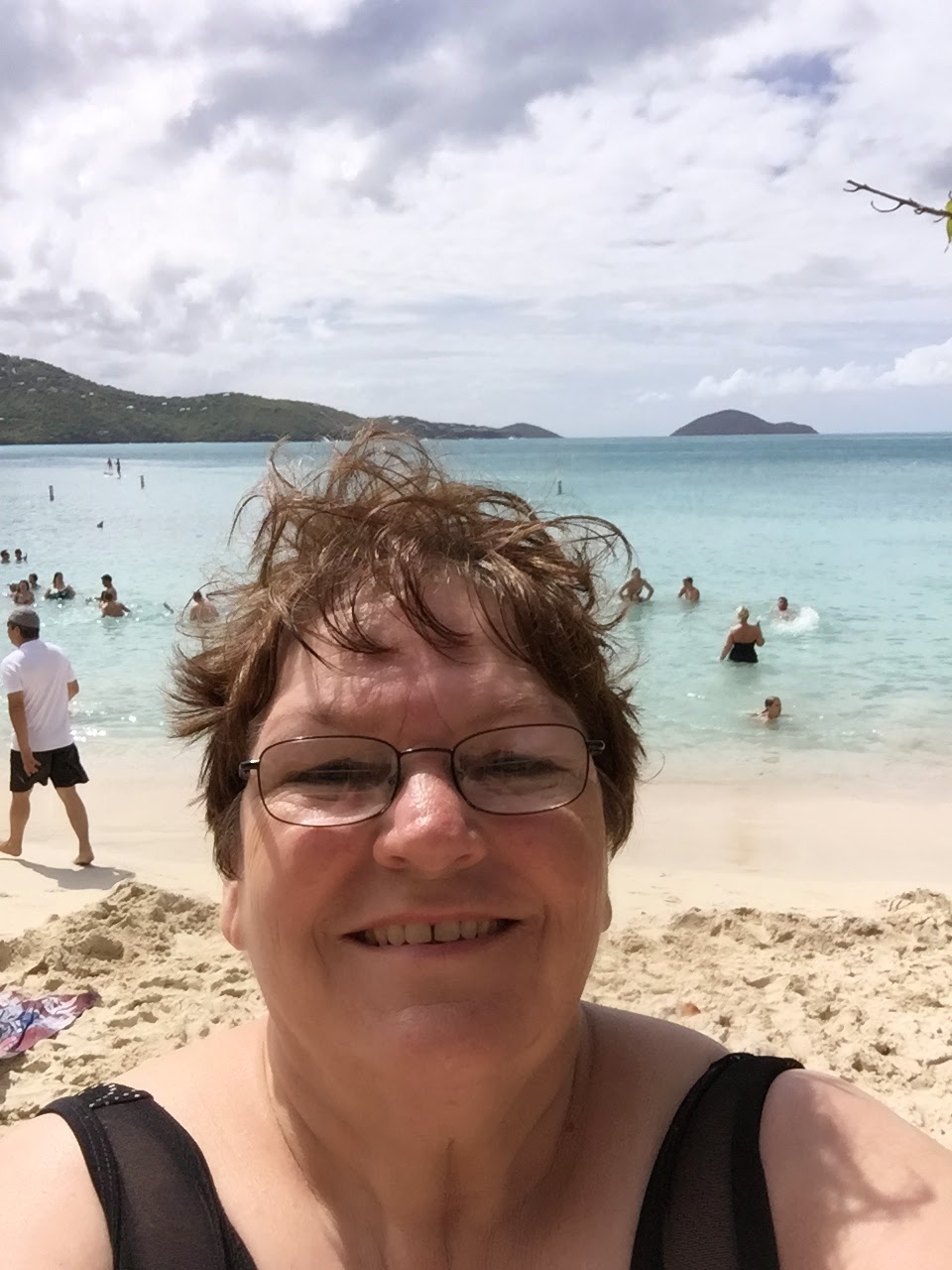 I gathered everyone together, after changing back for the return trip, for one last photo of this beautiful place, one of the top ten beaches in the world according to National Geographic. 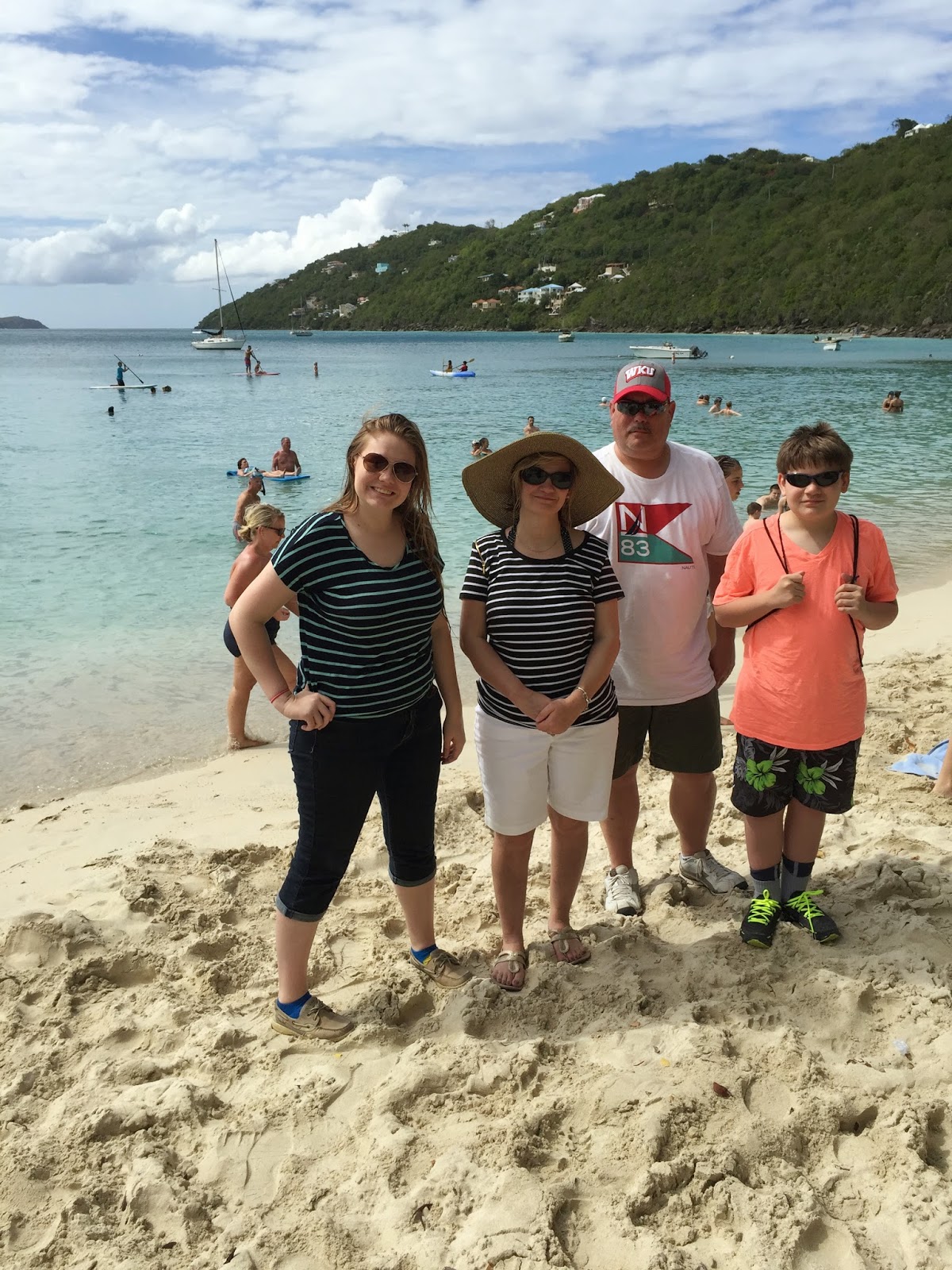 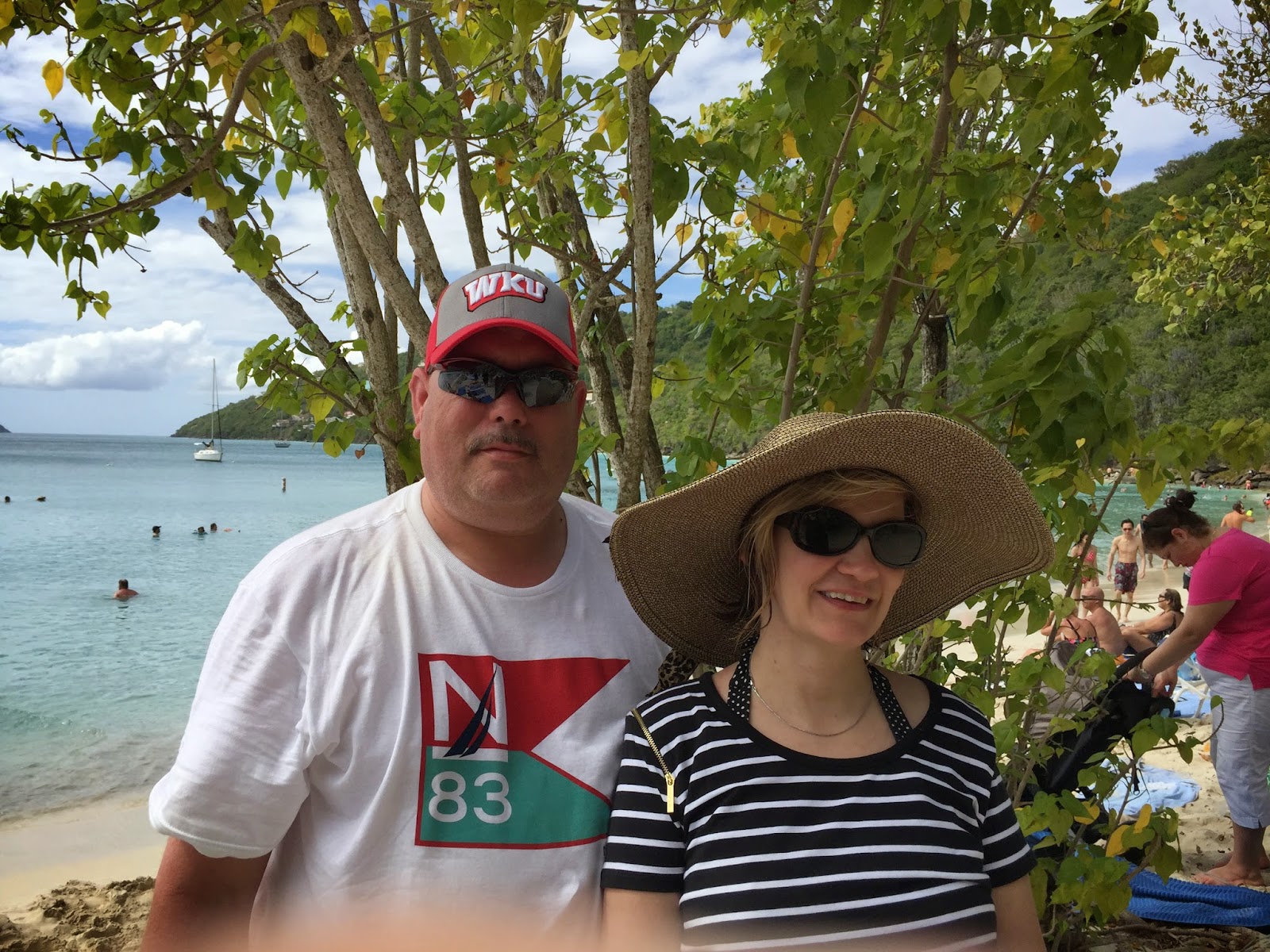 Then back into the taxi..

On the way back, looking over the hills with pink roofs, we could see our ship along with two others at the docks.   While rocking and rolling in the taxi careening downhill, I snapped this quickly, capturing the taxi roof as well! 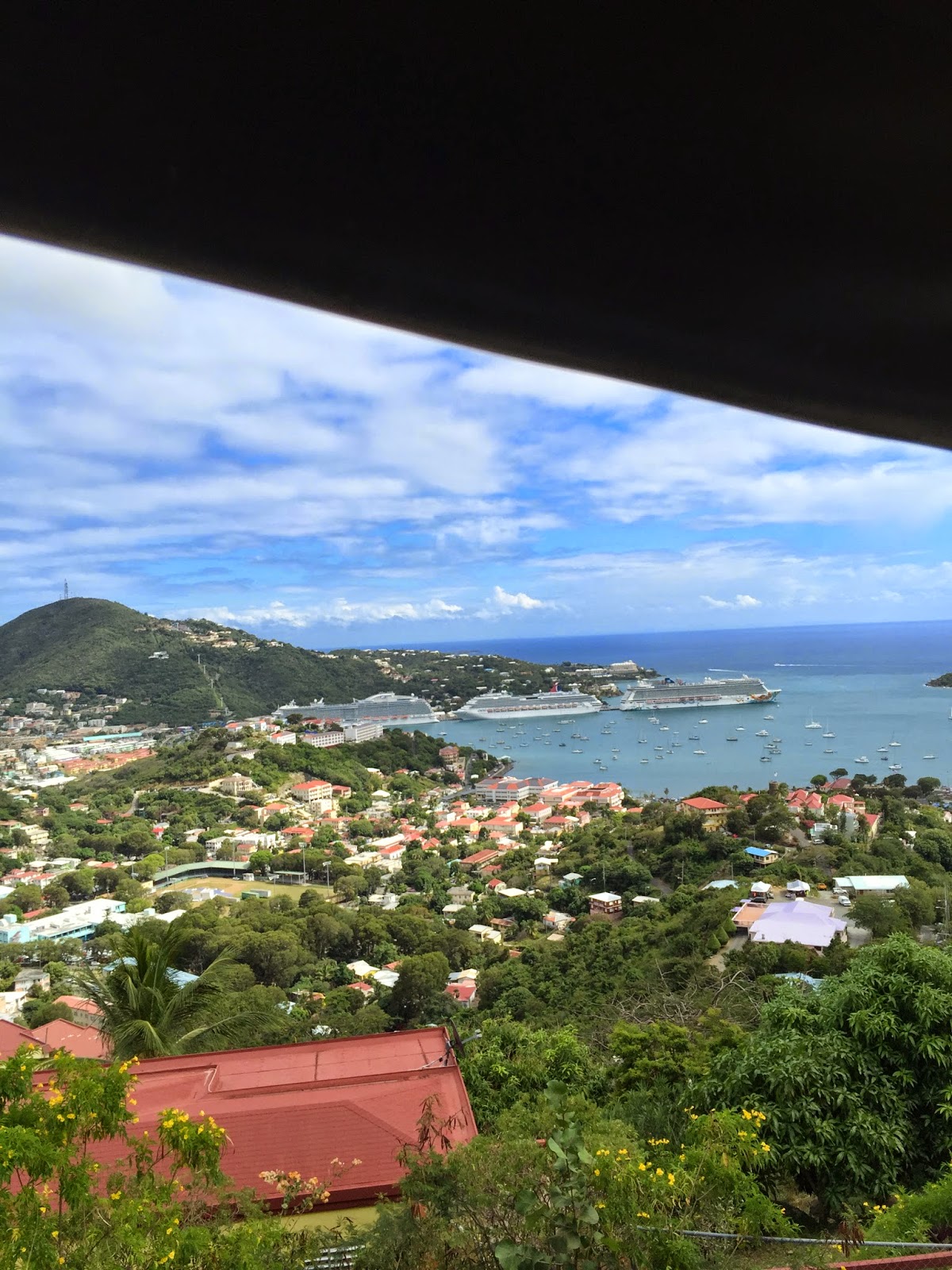 Everything was interesting as we drove along.    Stairways with bright pink railings... 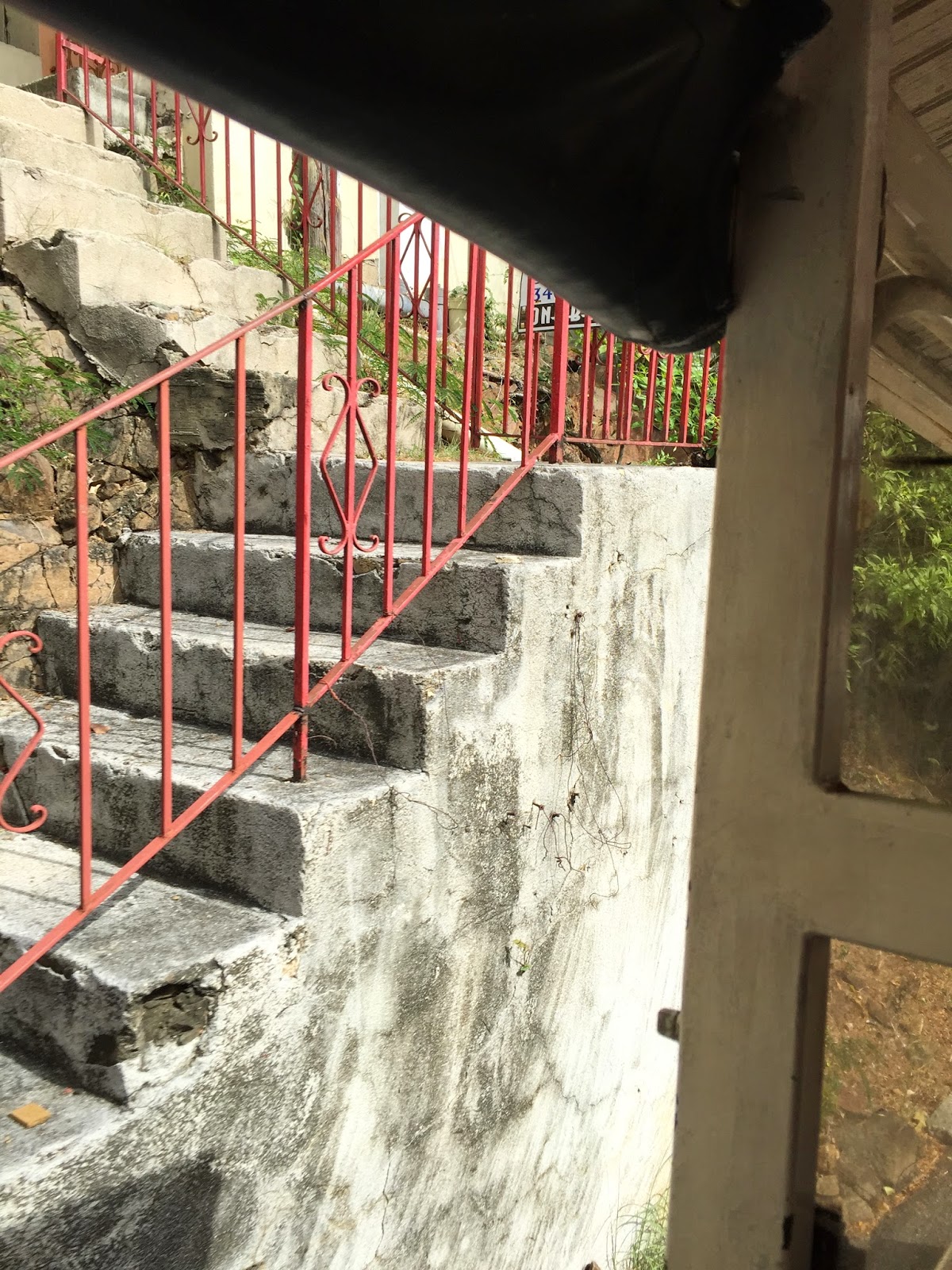 and
Interesting stores like this Diamond International store with these beautiful doors. 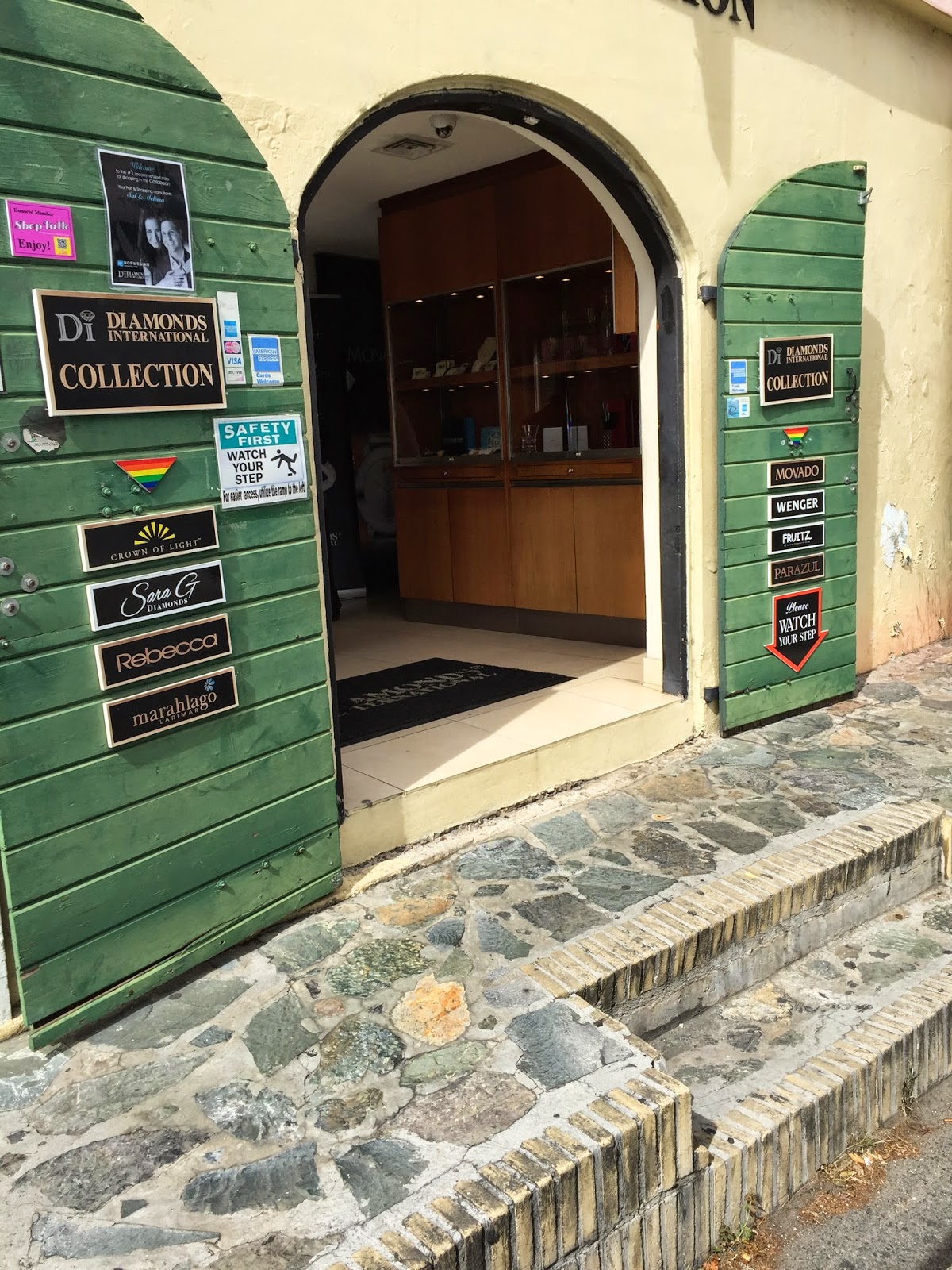 It was good though after the long day out to get back to the ship, tired and hungry!  A nap was needed first however, with a full evening of activities ahead! 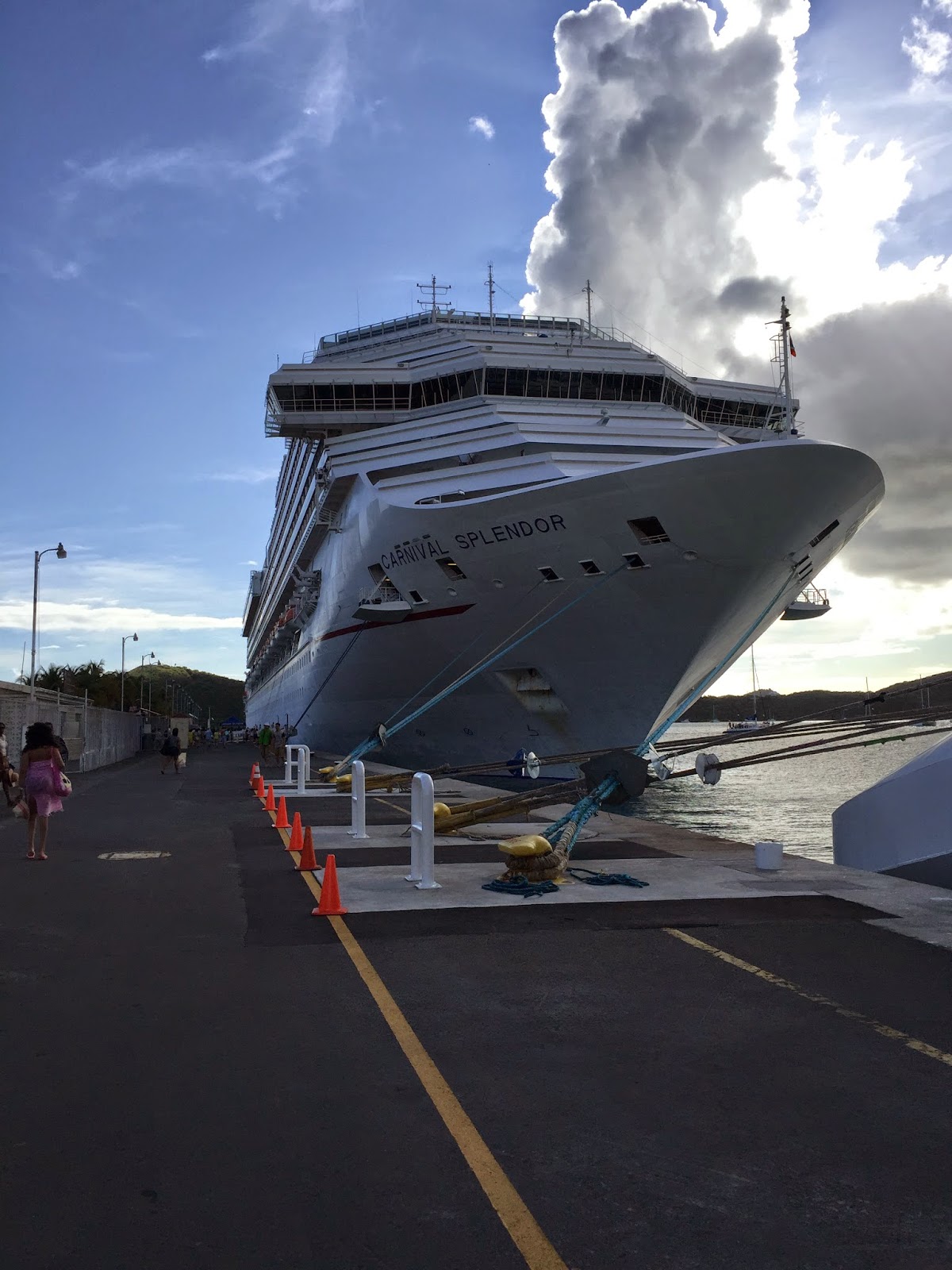 Diane Writes said…
I have never been to any cruise trip. In our continent the most common here is the Southeast Asian cruise, including a trip to Singapore, Malaysia, Thailand, Indonesia, Vietnam and other neighboring countries. This will definitely be in my bucket list! Your photos are great and your smile, it's contagious!
April 19, 2015 at 8:25 AM

bj said…
O, so glad you had such a beautiful time. I love cruising so much...but Mr. Sweet isn't anxious to go on another...just not his thing.
I, however, would go at the drop of a hat.
Love your pretty pictures and you are as cute as a button.
xo
April 19, 2015 at 9:16 AM

Patty said…
You describe your trips so wonderfully, Jeanne! I love the pictures - so clear and pretty - even when taken on crazy taxi rides!!
April 19, 2015 at 9:47 AM

Betsy said…
Enjoyed your trip with you. I like the idea of the bright pink raiing on steps.
I have yet to take a cruise but would love to someday.
betsy
April 19, 2015 at 10:35 AM

What a wonderful time you had! Thanks for playing today.

Please come back and tell me what you think of my Bridal Shower post.

My name is Riet said…
Isn't cruising wonderfuL.I love it. yOURS SOUNDS LIKE A BEAUTIFUL ONE. wE HAVE BEEN TO the Caribean once, it is so beautiful there.Love your photo's
April 20, 2015 at 3:05 PM

joyh82 said…
Sounds and looks like an amazing time! Great photos :) Thanks for stopping by my blog.