February 03, 2012
We have slowed down organizing and become blah this last week.  My new shelves are still loaded down but not organized yet.  I haven't found bins at any thrift stores and may have to buy some to get rolling.
I have noticed that our flat surfaces are no longer clear and I noticed we are developing bad habits of coming in and putting everything on the table in our Kitchen/Dining/Living Great room.  This isn't good.
For several glorious months, everything was neat as a pin most of the time after moving in and sorting out what belongs where.  I was very happy.
Then I became interested in blogging.  I became interested in thrifting.  I became interested in anything but picking up, putting away and generally tidying.  These things became chores that I noticed I've been putting off and things might be slipping a bit.
I think I'm feeling my winter blues which is crazy because the weather is gorgeous.
And we have been doing things...like this week, we attended an art festival on Sunday and my sisters and mom came over on Wednesday and spent the day!  We went out to several thrift stores!
While at one thrift store, my sister found a Vera Neumann scarf  which she generously passed over to me! 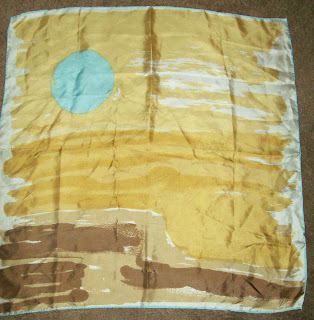 Don't you just love the art?  And the pop of turquoise? 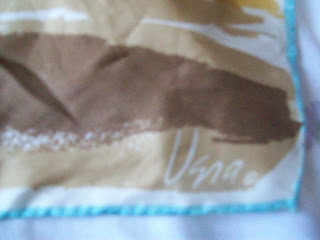 And I've been crafting.  My daughter Shelly sent me pictures and directions on making a tee shirt scarf which I followed.  Then I twisted into a necklace.
She has a tutorial on her blog and a video on how to wear the new tee shirt scarves.
Find it HERE on SIMPLY STATED 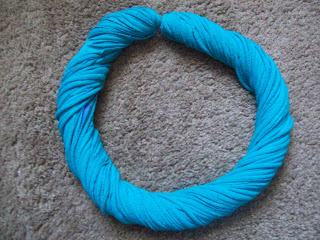 Maybe post holiday blues?  I hesitate to call it the blues because I'm not sad, I'm just feeling a bit stagnant.
So I started a different kind of project yesterday.  It isn't turning out as I hoped but I think it will be OK.  I forgot to take before pictures.  But will share some during and after pictures when I'm done.
art festival post holiday blues stagnant thrifting vera neumann

Wendy said…
Love the Vera scarf and the t-shirt scarf. For someone that's feeling blah you sure seem to be having fun! But I understand... When the house is disorganized I get bummed out, too. And, yes, the weather is AMAZING!
February 3, 2012 at 8:26 PM