Looking Back on the Move 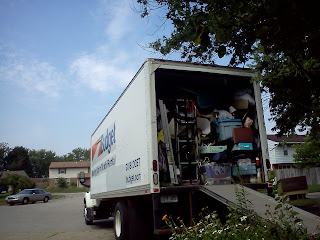 It was so great to finally get that truck loaded!  After five days of record heat and no air, we had packed and Chris had loaded the lions share.  Every evening Billy came by and loaded some more but Bill and I put all the last minute stuff aboard.  It was finally packed to the gills.  I kept saying...no more!!  We won't fit it all into the new house!  But we kept stuffing, one more thing, one more thing. 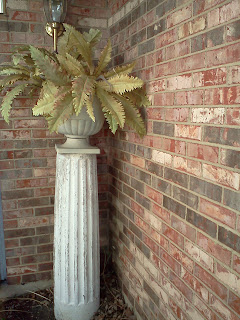 Unfortunately I was not able to get this wonderful old architectural column on the truck.  It came from an interesting old house in small New Carlisle, Ohio.  Years ago Bill rolled it to the car and was able to lift this solid cement piece into the trunk of our car.  Bill wanted to try this time now that we had an appliance dolly,  but it was so hot and I felt the rearrangement of the truck contents might be an issue.  The appliance dolly would have made it a piece of cake to move this time, but I didn't want to take chances. 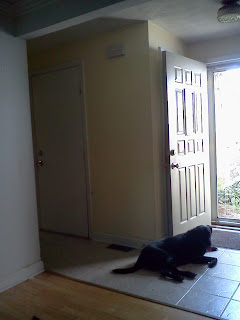 Gracie looked lost in the empty house!  Mohawk was so uneasy that he departed and was nowhere to be found all day.

Friends, Ginny and Rebecca came to say goodbye. We all felt sad and Rebecca cried most of the visit.  We kept calling for Mohawk but he didn't return and we had to leave him behind.  My neighbor was alerted when  she came to say good bye  and we just had to get in the van and leave. We were under the gun now in a time frame that didn't allow for a cat to come back...whenever.  Fortunately Billy came by the next night and Mohawk was there waiting to let him in.  Since then the cat has been living in Ohio waiting for us to come and pick him up.  Bad Kitty! 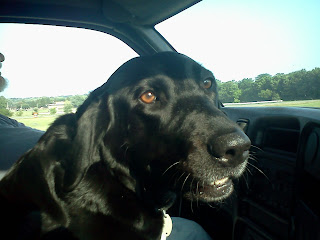 Gracie now had the front seat all to herself when we finally took off.  She was ready for the trip!  She didn't miss Mo or the cat carrier at all.  We were feeling horrible.  We were so glad Mohawk was found right away, but we didn't know it at this point.  It put quite a damper on the trip.  My word of advice when making a move with pets.  Confine them before you begin loading.  Mr. Mo would never have gotten out the day of the move and would have been here with us today if we had just taken that one precaution. 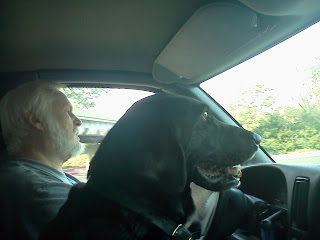 But we settled in for the long ride to Florida!  We met up with Chris, Dianne and the kids and traveled southward.  We took our time and stopped every couple of hours to let the blood circulate and the usual trip of 17-18 hours took 24.  We were exhausted but our respective circulations, however, were in excellent condition. 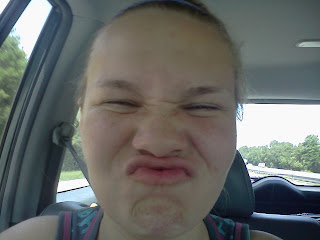 It actually didn't seem all that long.  We were kept entertained!  Not only did Lauren take a multitude of photos of everyone, she took photos of herself, new ones constantly,  that we would find installed on our phones! 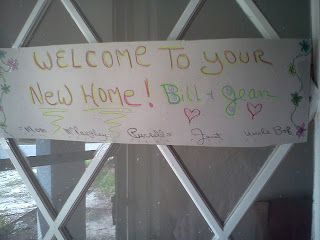 My mother's handiwork greeted us at the front door when we finally pulled up to the new house!!  Suddenly there were cars coming from around the corner and family greeting us!  My nephew and his wife and daughter were visiting from Arizona and that was a real bonus to get to see them and Becky, an uncle and two of my sisters, a bro-in-law and Rob, Lauren & Luke.

We adjourned back to my mom's house around the corner and we all had a lovely dinner and a proper visit!  Unloading the van had to wait.  We were all pooped.

It may be a new home, but it was like we were coming home!