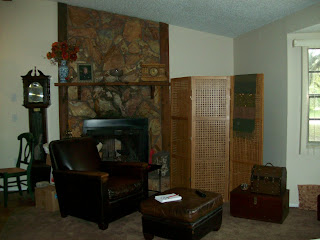 Our new house has almost been named.

Currently we are calling it The Cottage because it's so small.  We also have still been calling it, Uncle Bob's Cabin (just because we bought it from my Uncle Bob) like we did before we moved in.

When we first arrived Bill kept referring to it as The Lodge because of the large stone fireplace but thankfully that name has almost disappeared.

The area is named after a beach, which I love, but the planned beach didn't materialize due to some regulations years ago.  The closest beach is three miles away.  Besides the lot next to ours and behind is all wooded!  A beachy name for our house would be deceiving even though there is nothing between us and the Gulf except the house next door.

But as I said, it was my friend Kathleen who mentioned naming rooms that really caught my attention because we are stumbling over ourselves referring to them these past three weeks we've resided here. 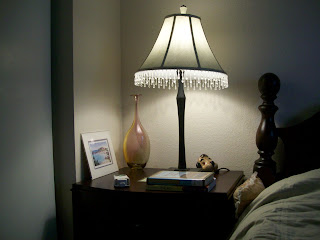 We have a bedroom named The Bedroom and a bathroom named The Bathroom.  That's easy, although I am toying with naming the bathroom The Floatarium.  (any one reading the 44 Scotland Street series by Alexander McCall-Smith will understand).

The problem now is we have a computer room/spare bedroom which is not named yet and the main area which is a puzzle.  It is really a "great room".  There are no walls.  It feels a bit confusing because most rooms are not defined like other homes have lived in.

The Great Room could be divided into two areas. One half is tiled which is the kitchen and dining area and one half is carpeted which is the living room/office.  There is a small wood floored foyer, too.   Should they be separate names?  Kitchen, Dining Room, Living Room, Office and Foyer?  The furniture is arranged where areas are pretty clearly designated at this point.  But they are such boring names.  Nothing fun like my friend Kathleen's Relaxation Chamber.  I'm going to have to put my thinking cap on.

Then we have the screened in room through French doors in the Kitchen/Dining area out behind the house.  Is it a Florida Room?  My California roots call it a Patio.  Bill keeps calling it The Garden Shop.  Forty years with K-Mart says methinks he doesn't want to let go.  I suspect it's going to stay The Garden Shop.  I'm discovering a stubborn streak in him now that we are together 24/7. 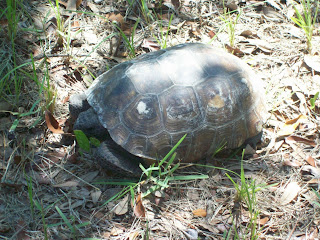 The Laundry room also has a door to the back yard and sidewalk that winds around The Garden Shop to the driveway.  It could be a very nice Mud room as well, our grass is very sparse.  But we never go in or out that way.  It's only convenient to let our Labrador, Gracie, out at night.  Naming the door in the Laundry Room "Gracie's Door"  would take care of the doors anyway.  The Front Door, The French Doors, Gracie's Door and (sigh) The Garden Shop Door.   For such a small house we certainly have acquired a lot of doors to the outside. 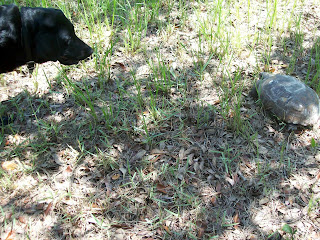 We didn't have any trouble naming our tortoise.  Rambo makes an appearance nearly every day.....whenever Gracie is inside.  That first and only meeting was a doosie. 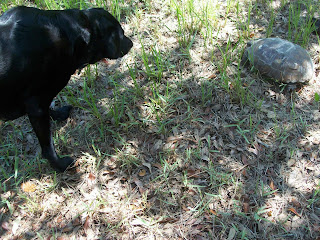