Billy came across this interview online and sent it to me with a smile and a wink.  It had some pretty amusing parts.    I don't remember seeing it before.  After reading it a few mornings ago I have been pondering about this one portion......

Apart from fans, what do your families think of your music?

James: My mom loves it and I don’t why, I like to think she loves it in a motherly way but I honestly will walk in on her listening to some death metal band on myspace. It’s so random and I will ask her why she’s listening to it and she’ll say “well I think they’re pretty good” (in his best female impression which gets Mike and myself in hysterics). She took to it and follows it much the same as my sister. My family never listened to music and ever since I have been doing this they have all of a sudden re-found music and me being the example they have kind of taken to this type of music.

There is a simple explanation of course.  I wasn't a fan of Death Metal or Metal of any kind prior to 2004, but James is right. When you have a son involved in a business, any business, moms are interested.  Dianne is truly interested in all the music, whereas I listen for a reason:  When he comes in or calls and is excited because they are touring with a certain band I want to be genuinely excited too, not because he says they are big, or fun or interesting but because I know who they are and know for myself they would be great to tour with. 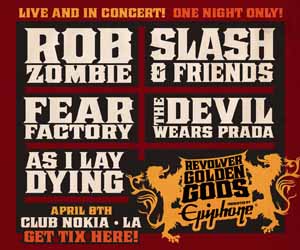 I listen and follow bands to get an ear for this type of music to learn what is good metal and what is just copycat or repetitious music.  I still like the music of TDWP best by far and I don't think it's just because he is in the band, but because I lived and breathed it for years.  I'm a real fan.

First of all as the songs were being put together I could hear parts of them alone. James played the songs for me as they were working on them.  I can see him react to different parts, drum along and stop it here and there to explain something.  This makes their songs much more personal for me. 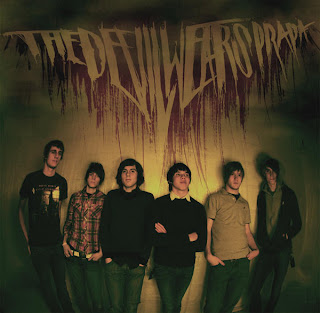 
Look at these guys in the photo above.  I was there that night.  I was there every night.  The band began in our home and then my building where this photo was taken.  Right from the beginning I heard them writing music every single day.  I went to all the shows and saw them perform.  Very early I recognized they had something special over the other local bands.  I remember the second or third show being shocked suddenly when they began playing,  thinking, wow, they sound so professional. 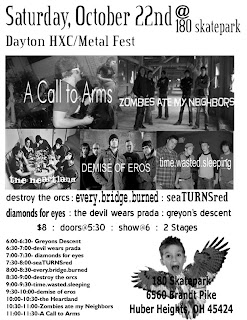 The first three albums came together right under my nose and so those songs are special to me.  Now, what they put together is far and above those songs and I'm glad I know enough to see that. 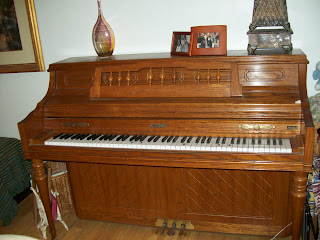 Now, back to the interview....I do have to take issue with we never had music at home!  The truth is we never played the radio at home, but we always had music.  While James was growing up, Dianne, Shelly and Billy all played piano day and night practicing all the time.  Plus they played other instruments as well,  clarinet, the bells, drums etc.  Billy had friends over and jammed occasionally in the middle of the night.

Shelly and Billy were in the marching band at Wayne and we went to many practices and almost every home game for years.  Dianne played piano for our church.  Being in the music program at school meant three to four concerts per year as James grew.

I never hushed them while they were in high school and James, "the baby" was sleeping at night or napping.  He learned to sleep through all the family noise and music.  Especially music.  Billy was always writing drum cadences, tap tap tap...all day.  Those same cadences are still played at the local high school twenty years later.    He wrote songs on the piano, but mostly he played for fun.  I could listen for hours when he played for me.  Dianne had to learn and practice hymns and her classical music. She worked at her piano lessons.  She had an elegant touch.  In between them Shelly was practicing her piano lessons as well.  I loved it when she played the bells in Middle School.

Oddly enough we didn't allow anyone to listen to metal music or any type of extreme music at home or go to a show or concerts.  Not that they didn't listen, just not at home.  White Snake was big when the kids were teens and they scared me, but even years later when James was a  Linkin Park fan, he wasn't allowed to go to a show....they were evil in my book.  I had never tried to investigate the music scene.   I just forbade it all and was completely closed minded.  It took knowing the kids in James' bands and the multitudes constantly flowing in and out of the house when the boys practiced to understand they were nice kids, good and very interesting music and nothing to fear.

It's hard to believe now!  He is right when he said we have rediscovered music through him.  All kinds of music.  We really do enjoy the shows, the excitement and hearing new bands.

Six years later The Devil Wears Prada are releasing their newest album on Sept 13, 2011.  Dead Throne.  It's their best one yet. 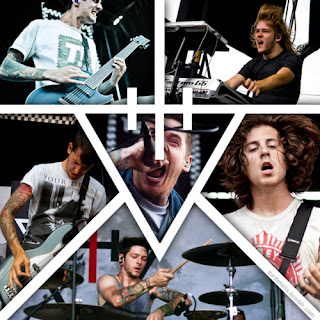 
And as for the portion of the interview where he says:  "she’ll say “well I think they’re pretty good” (in his best female impression which gets Mike and myself in hysterics)"

I know where he got the speaking in a high falsetto when quoting me: 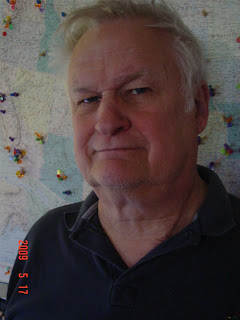 Anyway...It's an older interview, but it you would like to read the entire interview..here is the link:
http://clinkmusicmagazine.com/2009/12/15/the-devil-wears-prada-interview/

How open minded were your parents?  Did you have music at home?
clink music magazine Dead Throne interview James Baney The Devil Wears Prada

Marushka C. said…
This is a lovely post -- I can hear how proud you are of all your children and I think it's terrific that you were willing to explore new musical areas because of your son's dreams. I hope The Devil Wears Prada enjoys great success with the new album.
September 13, 2011 at 7:03 PM

Patty said…
Have they really been together since 2004? I will never forget having them crash at our house in CA on one of their own tours! Boys in sleeping bags everywhere! It was their band and the other one - was it "Corsets are Cages" or something like that?? A great memory!
September 28, 2011 at 8:08 PM