September 27, 2011
It's a big night for Mom, she is a special guest at a fancy 25th anniversary party of her Sweet Adaline's chapter on October 1st.  She is one of five or six charter members and it was suggested the charter members come attired in silver to honor the occasion.

You know how that is.  It's pressure cooker time.  Not only do you need to shop for something appropriate, but your color choices are narrowed down to ONE.  My sis and I decided to help.  We took Saturday afternoon and combed the shops along Highway 19 looking for silver.  The shops have not stocked their winter holiday silver clothing yet, so looking for the right shimmer among the patchwork, orange and black, fall casual clothing would be impossible.  We turned to the resale shops.

The low prices were a boon.  We didn't have Mom with us to try things on.  She was lounging in a salon having her hair or nails or something done.  An air conditioned salon, no doubt, with comfy seating.  We trudged in and out of stores loaded down with every dazzling silver top we could find.  It  was hot, humid and sweaty work but when we were finished we crawled into Karan's house as the sun was practically setting with enough tops to satisfy even our mother and toasted our effort with a refreshing icy beverage and had a couple of  pizzas sent in.


I delivered the bags full of silver tops on Sunday and then was off to do a dozen things, confident Karan and I  were on the A-list and the problem was solved.  Karan called late Sunday night and ...nope.  Several didn't fit, several were not the color of silver Mom wished to wear and the one she liked, well...it just didn't work.

Soooo plan B went into effect.  We arranged to meet today at the mall and try our luck there.  Again, among all the FALL clothing.  Mom and I parked outside Sears and met up with Karan and we thoroughly exhausted dozens of racks.  Sale racks, new for fall racks and the dressy racks.  Nothing.  Her feet were aching and I must admit mine were too. We wore out two sales clerks.  And me.   Shopping is not my thing.  We decided Mom and I would go by car to the next store as it was easier to drive than to cross the length of the mall by foot.

The handicap parking was nearest the door, but the hike out there was brutal in the heat.  We got into the furnace...er..car and I asked where we were going.  She said Macy's.  I looked up and was dumbstruck.  I was facing Macy's.  It was right next door.  Six lanes away from where we were parked. Know your mall, I thought.  Had I lived here more than six weeks, I would have known we could have just walked...like Karan did!


I smothered a giggle and we were off.  I knew we had rattled her by making her try on a dozen tops in Sears.  She barely got started and suddenly she wondered if we were supposed to meet her at Penny's, not Macy's.  With determination she made a quick left and another quick right and floored it to two stores down from Macy's towards Penny's.

"Let's call her" I suggested.

I was envisioning a trek around the store in vain looking for Karan who was not there but at Macy's.  She handed me her cell.

"I don't know how to use it and I'm driving", she responded reasonably.

With a big sigh I figured it out and made the call.  No answer.  We pulled up to JC Penny and stopped quite abruptly.  I didn't hit the windshield, but barely..  I finally reached Karan and she was at Macy's.  No, she didn't want to come down to Penny's.  She found a great top!  Again, I held on to my hand rail above the window as we took off across all the empty lanes and swooped around the building.

"Damn" she said.  Wrong lane!" as she wheeled past the entrance a few steps from the door to air conditioned heaven. 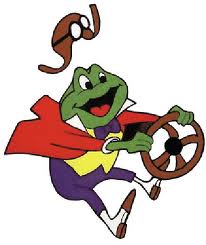 She careened off to make a U turn on two wheels and rounded the concrete island as I hung on for dear life and we parked in the middle of two spaces.

I looked up and there we were.  Six lanes over from where we started.  The giggles won out and when I told her why, she joined in.

The Silver Treasure hunt was a wild success as Macy's had two perfect tops.  She'll be the belle of the party!  We purchased them and retired to Red Lobster for a fun late lunch..

Thank goodness she decide to have a beer with her lunch.  I got to drive home. 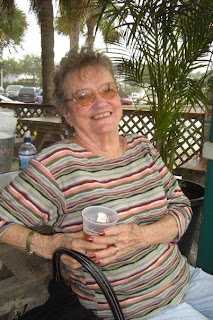 Unknown said…
What a great story, Jeanne, and wonderful memories with your mom. You'll have to post a picture of her in that silver top.
September 27, 2011 at 12:43 AM

Patty said…
You tell the story a lot better than mom did yesterday!! I can certainly picture you all out there shopping! Can't wait to see the top!
September 28, 2011 at 8:14 PM