Beaching It on Honeymoon Beach and Sand Key

April 11, 2012
How do you go to the beach twice and not take any pictures?  Especially when you have children and grandchildren in tow?  I was just enjoying the day so much that I didn't make the effort, much to my sorrow today.

At Honeymoon Beach it is just a very short walk from the parking lot to the beach.  You walk on a short path through the sea oats and cactus and emerge at the beach entrance where there was even a bench swing.


Honeymoon Beach pictures on the web
We put up our canopy that shaded all nine of us and assembled beach chairs and blankets and towels in the sun and shady areas and spent four hours there on Monday.  We had a lovely picnic lunch with cold asparagus, ham sandwiches, egg salad, crisp veggies and several bags of various chips.  The cooler was filled with water bottles and ice.  We learned this after our first beach trip to Sand Key which was sans food and drinkless.

Sand Key is the beach next to Clearwater Beach and much less crowded.  We went to Sand Key on the day before Easter.  It was wall to wall blue beach umbrellas in sections though!  There was a vacant spot near the banana boat launch and we set our chairs out right by the water and toasted in the sun for two hours.  The water was so refreshing on both beaches.  The tiny waves on Sand Key were higher but the shell content on Honeymoon Beach ruled. We looked into the cost of the banana boat, which looked a little dangerous to me.  It was $20 for 15 minutes.  We checked the time when one left and came back and they were out less than 10 minutes, so we decided against it.

We emerged from the two days relatively free from sunburn except for a couple of faces, arms and one chest where sunscreen failed to be applied thoroughly or washed off.  The down side to sunscreen is no one increased their tans.

Bill and I waved everyone home yesterday.  We are smugly happy that both Honeymoon Beach and Sand Key are close enough to visit often!  Ahhhh retirement is just the best! 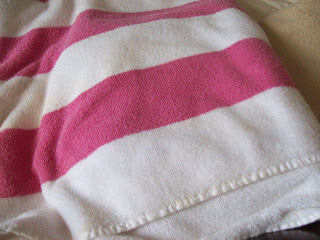 Bijou Sugar-Socks said…
jeanne dont worry too much abt the pics, what matters is that u and ur family enjoyed ur time together :) i did check out the Honeymoon Beach pics on the web and its beckoning to me :)
April 12, 2012 at 2:43 AM

Anonymous said…
Sound like you had a fabulous time with your family. Sometimes we get so caught up in taking pictures that we miss just enjoying the moments. Thank you for sharing. Have a wonderful day!
April 12, 2012 at 9:56 AM

Wendy said…
Lol, I would be smugly happy, too! It sounds like Nirvana.

Vores have said…
Beautiful rug you show.
Sounds to have had some wonderful days at Honeymoon Beach.
Thanks for the comment on my blog.
Wishing you a good weekend.
Hugs Hanne Bente / hbt.finus.dk
April 14, 2012 at 7:23 AM

Anonymous said…
I'm going around visiting everyone on today's PINK SATURDAY list.....with my hot cup of coffee, of course! Just wanted to let you know that I was here! Have yourself a great weekend, and stop by my place if you've the time!

Ann said…
It is so wonderful you live in such a fantastic area of the country. Retirement is the best, my hubby and I both are too however we live in the Midwest not near the beach. Honeymoon Beach looks awesome, I took a peak at the website. Glad you had such a wonderful time with the grands.
Happy Pink Sat
Ann
April 14, 2012 at 8:53 AM