April 03, 2012
I knew it was going to be a job.  I am crafty, my husband Bill is an organizer.  We are not handy.  When a home repair is needed I know it's going to be an ordeal.  It doesn't have to be a difficult repair.  My prayer is always a big whine. "Lord....why does this have to be soooooo hard??"  It is usually uttered when we are over an hour into a repair and on our second or third go around.
Removing the old chandelier that was here when we moved in last summer wasn't too difficult.  I was astounded at how lightweight it was though.  I was also surprised at how much dripped paint there was on it. and how dusty it was.  Things sure look different close up. 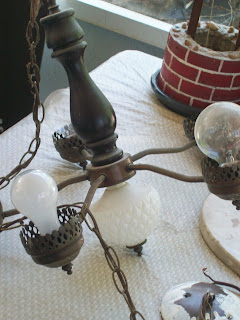 A bonus was, years ago I found a white ceiling medallion at a yard sale for only $3.00, still new in the package.  That went with us in to Florida because I knew I was taking my nice chandelier from the old house and this medallion was larger than the one I had in the old dining room.

I was all set and yesterday.  I firmly announced "Today is the day we switch out the chandeliers".   That was a bold statement as we had been ignoring this job for seven months.  Anyway, it was about 3:00 when we started.
Once the old chandelier was removed we took out the new chain and cord we bought last month and realized it was a plug in type cord.  It took us awhile to figure out what to do.  I made a decision:   we had to cut off the plug in part, wire it together to the existing lamp cord to make it long enough to loop, since the ceiling wiring was not over the table like at our old house.  I did that part!  Yay, me!
Then the struggle really began.  Once the lamp was wired, we had thee pieces to put together in the ceiling, using one shaky ladder.  Everything kept coming down.  The screws weren't long enough to accommodate the medallion, and so on and so forth.  We struggled to adjust the screws.  Bill planted himself firmly on the ladder, while I braced it and held the medallion in place with a broom as he wired and unwired the chandelier dozens of times.  We gave up on the medallion but then the base wouldn't fit properly against the ceiling.  The screws were too long now and it dangled.  I prayed my whining prayer several times.  Then I switched the prayer to "Show us how this will work".  Suddenly, when the light was getting so dim (it was nearing 7:00 PM.) it all came together and it was up.  Whoopee!  With the medallion!
As I flopped onto the sofa in the living room I looked at it from afar and realized with a sickening thump that the loop was too low.  Way too low.  It all looked odd.  The loop dangled almost to the bottom of the lamp.  Bill was on his way to flip the fuse box back on and I decided not to mention it.  Suddenly the ceiling fan light blazed brilliantly for an instant and then popped off.  Yikes.  We weren't even working on THAT ceiling fixture.  The light over the sink didn't come on and most importantly...... the chandelier didn't light up.  All three were on the same fuse.  Now none of the three ceiling lights worked.  We played around with it for a bit but they weren't going to come on.  We really missed not having Will Jr. just down the street.  My son can do all those wonderful home things.  He had put in tract lighting  for us in the other house and numerous other jobs.


It was after 7:30 when I called Mom and asked her the phone number of her neighbor, the handy one, who fixed her light over the stove a few weeks ago.  He does odd jobs on the weekend.  She went over and asked if he would like a job... he said he would come right away.  He got here about 7:45.
He was done by 8:30.  He discovered the problem was not Bills wiring job.  It was mine.  The only thing I wired....the original cord and the added length cord together.  It was shorting out everything.  He not only fixed that, he also shortened the loop chain and rewired the whole thing back into the ceiling.  All in 45 minutes. 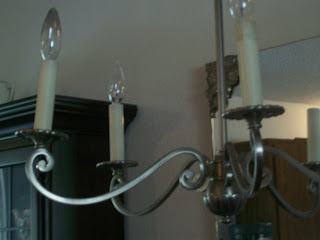 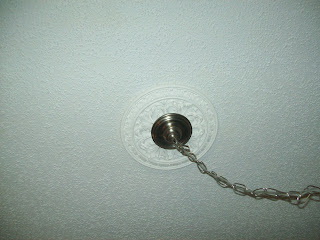 He only asked a measly little fee.  I doubled it and restrained myself from kissing him as he left.
All three ceiling lights were now working.

Praise God for people who know how to do things! 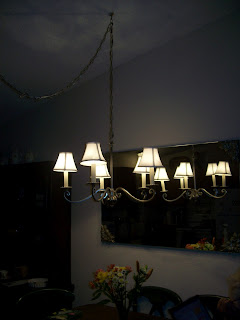 Town and Country Gals said…
Jeannie,
I feel your pain! Just had somewhat of the same experiance in my DR. Chandy sat on the DR table for almost 2mos, then had the argument about wheather it should be moved over, I gave in, big mistake! It sitll needs to be moved and is a tad crooked! Hopefully will be fixed soon?
Rebecca
April 3, 2012 at 3:40 PM

Cheryl said…
I am very lucky in that my husband knows how to do electrical stuff-- although he wired/hooked up our spa... and I wouldn't use it for about six months, just in case lol
big hugs,
Cheryl
April 5, 2012 at 1:09 AM

Anonymous said…
Projects are NEVER as easy as they seem. Glad you finally got everything working. Your new chandelier is beautiful!
Sharla
April 6, 2012 at 12:21 AM

It's sweet that you both tried but this kind of job should be done by a handyman who knows about wiring. It was well worth the wait. Your medallion and chandelier are beautiful.

Jennettehogan said…
beautiful chandeleir!! I love it and I cannot wait to go to Florida and see what all you have done to the house!
April 10, 2012 at 8:44 AM