July 06, 2012
It has been fun making totem's for the garden but before I sold any, I had to use one as a 4th of July centerpiece. 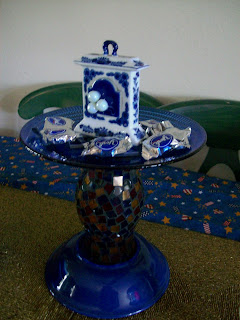 In the garden it catches rainwater for a cute birdbath

In the garden, though, the plate will catch rainwater to make a lovely birdbath.  It features a stained glass mosaic base that looks fabulous in the sun.  This piece can also be hung as a feeder in a covered area.  Made easily with just thrift finds.
For the holiday meal, I fixed Kayem Old Tyme hot dogs.
They were fabulous 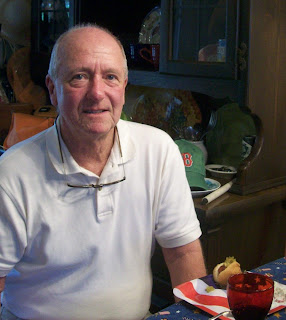 and were thoroughly enjoyed by my brother in law Michael
until he was interrupted by my camera wielding mother.
The menu for the 4th was very traditional, Hot Dogs, potato salad, baked beans, watermelon, chips, and pickled beets.  You heard me.  Pickled beets.  There was a bit of a discussion whether pickled beets belonged on the menu....
.....But I digress.
While the family watched the Tampa Bay Rays lose, after our picnic supper,  Karan and I got creative.
Karan brought with her a plate out that she wanted to embellish.  So we played around with it and came up with this: 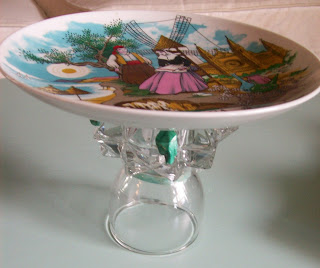 We were having fun with the box of polished stones 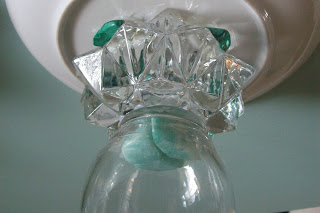 But now she has a lovely serving plate featuring a village she visited while she was in Spain.
Isn't that a great conversation piece!

Jeannie Marie said…
I hope you ignore the extra pins...I learning to post them and can't delete the extra ones. They all pin the same picture...the garden totem...but I'm giggling to think it looks like my bro in law could be pinned on Pinterest!
July 8, 2012 at 12:08 AM

Wendy said…
Sounds like you had a great holiday. Butttt pickled beets are yucky. JMO - it's a childhood issue/thing, lol.
The totem and plate projects are very pretty and creative! Well done!
July 8, 2012 at 6:45 AM

Diann said…
Sounds like you had a fun day especially when it includes have a little "creating" time. It turned out so sweet. Thank you for sharing at TTF and have a great day!
July 8, 2012 at 12:41 PM

Ivy and Elephants said…
These are so creative and pretty, too!That blue is gorgeous! Thanks so much for sharing with us.
Hugs,
Patti
July 8, 2012 at 6:19 PM