June 19, 2013
I'm ordinarily not very conscious of carrying the right bag for the right season.  I usually like a brown purse that will do for any season.  Over the years I have carried only one purse until it's in tatters before purchasing another.  Usually it would be quite scuffed or a handle would break before I noticed.  The effort to move all my stuff from one overflowing bag into another was not worth the effort.  Since living in Florida I had been buying bags willy-nilly and changed them often.

However, while shopping the other day,  I looked down and here I was carrying a brown bag.  True, the weave looked straw like and therefore somewhat summery, but I felt I had regressed to old habits. 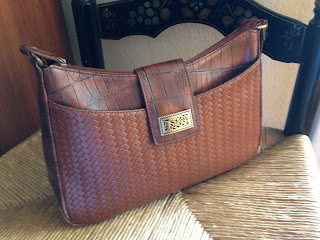 Since I've moved to Florida my eye has been drawn to the rack and racks of thrifted purses, many of which are in practically pristine condition.  The first year I changed bags frequently.  Now it seems I've been slipping even though it's much easier to switch them out.

I have this interesting little pocket bag that was given to me by my daughter, Shelly.  You simply pick it up out of one bag and place it in a new bag and presto!   It carries all the necessities, the gift cards, the credit cards, the cleaner and tissue for my glasses, a mirror and tweezers.  (who hasn't been horrified when they are out in the car and look in the rear view mirror and see a hair (or six) that have been growing since Bible Times)  I have my lip gloss, change purse, and pockets for my keys, paper money and phone.  It has two rings to lift it out, that are always in the way, but best of all no one sees it.  When the corners get worn and the ink marks up the lining, no one will know.  Ha ha, but I am digressing and rhapsodizing over the wrong thing! 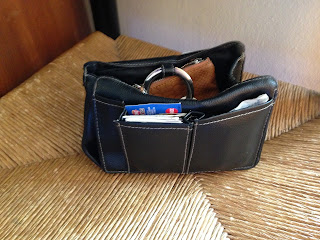 I've bought a number of bags since I've been here and even been given some, like this bright red beauty from Nine West.  All good and well 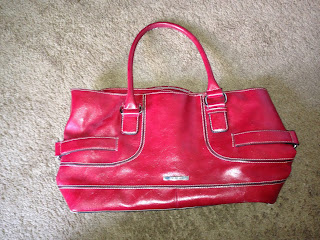 but I didn't have any that looked summery.

While in a brand new Goodwill store last Saturday to have them remove a plastic piece the old store forgot to remove when I bought a blouse last month,  I began to browse, mentally promising myself there was nothing, absolutely...n-o-t h-i-n-g  I wanted.  I passed by the glassware, sailed by the jewelry and  scarves, only stopping to sign up for a free kayak.  Well, it was the stores first day, the grand opening!  Heaven help me if I win.  A red kayak will be somewhat difficult to decorate around.

I tried to avoid looking at the purses atop every counter.  I failed though, when I spotted a Vera Bradley egg shaped bag that was so new it practically had tags, for $22.  I wondered if it was worth it.  I tried to carry it, but it was awkward.  Shelly was called and I sent a photo.  Shelly who owns Vera's like other people own Targets Mossimo bags.  Both she and her daughter even have Vera luggage.  She said she wouldn't buy it. So back it went. 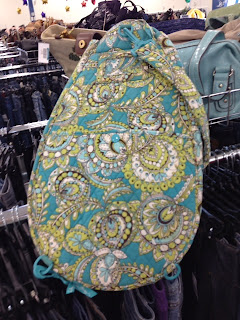 And then just under it I found a simple little summer straw.

The straw was painted a watery mix of aqua and green and it felt like a vacation.  The bamboo handles were beautiful.  The straw whispers Florida.  The bag had the required number of pockets and zippers that I like.  It was small, therefore encouraging me to not to stuff it therefore keeping  the weight of it manageable. I'm wearing a lot of aqua and greens and blues right now.  It would go with anything, stunning actually with yellow, which is another color I have been recently buying.  But it was $4.95.  I hate paying $4.95 for a pre owned bag.  (notice it's now pre owned and not used?).  I sent a picture to Shelly once again and she was nominal.  "Is it worth it to YOU?" she wanted to know.

And now it's mine! 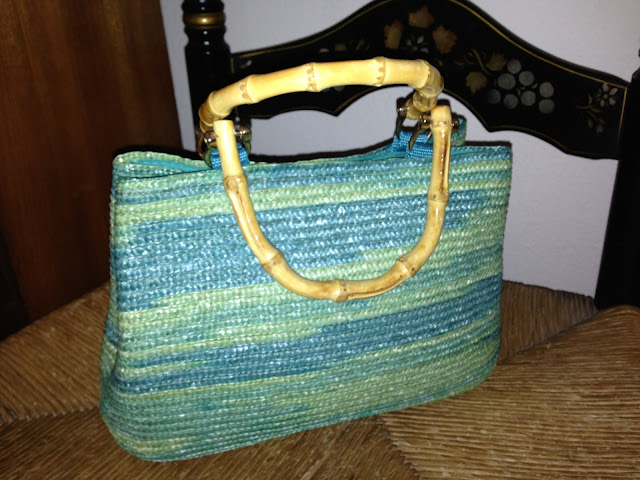 I'm sorry, brown purse, but I may carry this one until it tatters.

Pam~ Virginia Retro said…
Oh, that is a sweet bag! I buy thrifted bags as well, but agree it is a pain to switch purses.

Cindy Osborne said…
I love the idea of an interchangeable purse within a purse. That's brilliant. I'm leaning toward the straw bag. it's summery and it holds all the stuff I still have to have.
Cindy
June 19, 2013 at 1:12 PM

Ivy, Phyllis and Me! said…
Good Afternoon Jeanne, I love buying from thrift shops as I always find it amazing what people part with. Funnily enough, when I visited Atlanta I went with my daughter to a thrift shop, sorry Goodwill, and bought 4 bags, yes you read correctly, 4 bags which were wonderful summer bags. That was 3 years ago now, and I haven't bought a bag since. So I tell myself they were worth every penny.
I have to say, I love the idea of a bag within a bag, that really saves transferring from one bag to another. I shall have to look into finding one of these.
Best Wishes
Daphne
June 19, 2013 at 2:36 PM

Thanks so much for stopping by!!

What a grear straw purse!! Love it!!

Rebecca said…
I like the way you think, Jeannie. Would you believe I live within minutes of Vera's hometown but have never bought a new Vera bag? I've bought one or two of hers at thrift stores, but even at that, they are expensive just because of the name, I guess.

I like your "new" blue straw bag. I really SHOULD change out my winter black for something more seasonal. You've convinced me!
June 19, 2013 at 7:20 PM

ThrifterSisters said…
That bag is absolutely perfect for Summer and year round in Florida. $4.95 is a steal for something you love~