March 01, 2012
I needed to clean out the fridge leftovers so yesterday I made a very healthy tortilla soup. 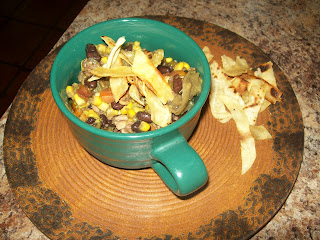 I boiled the leftover chicken leg quarter with a half an onion, celery and seasoned it with sage, bullion, black pepper, turmeric, paprika and cayenne pepper, simmering it for a couple of hours. I removed the chicken to debone it.   I added the last of my baby carrots, chopped into chunky circles and some salad tomatoes that were looking a bit  sad.  A half a bag of sweet frozen corn and a can of black beans went into the stock.  I found a cup of ground beef left over from tortillas earlier in the week and tossed that in despite the fact I was putting in shredded chicken.  While all that simmered and blended in the crock pot, I took the last of the corn tortillas and sliced them and fried in 1 T of olive oil until crisp.  (It was a GARNISH for heavens sake.  I heard that gasp,)

I added all the ingredients up on the website: myfitnesspal.com and found it had 720 calories for a two cup serving.  Lunch today will be a one cup serving. (see photo)  that has absorbed most of the liquid.

That friends, is how to clean out a fridge!   Two meals.  Nothing thrown away.  Happy tummies.