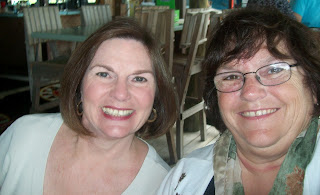 For sixty two years Karan and I have shared a birthday week, but we haven't celebrated together more than once or twice in the last forty years.  Living a thousand miles apart and raising families kept us both busy and I believe it has been at least twenty since the last time.  But tonight we celebrated in a big way! 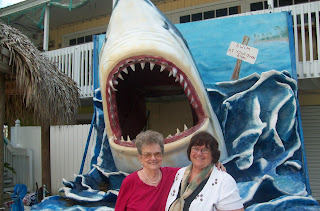 Mom, the guest of honor, and Bill and I arrived just in time.  We were persuaded to pose by the tourist trap and Bill took our picture to record the occasion.
We hurried in though because there was a storm a brewin' 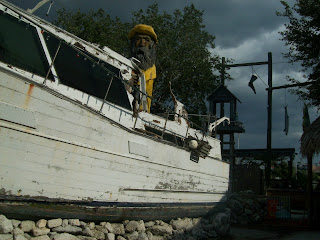 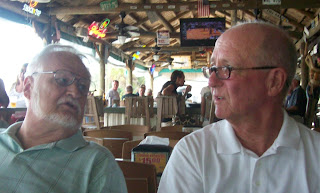 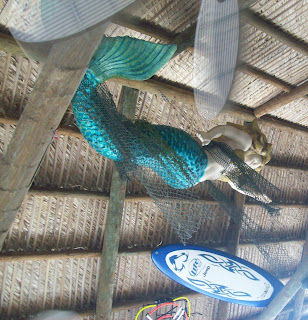 Suddenly just as we finished our dinner the heavens just opened and it POURED rain!
You couldn't see across the marina...it was like a white out! 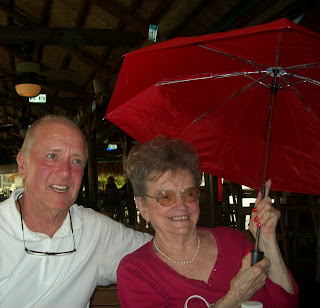 We waited out the drenching rain by dodging stray drops that found their way through the palm thatch above.  We avoided the splash of the steady waterfall all along the overflowing gutter just to our right.   But Mom was prepared!
Just as we were beginning to tire of all the rain....
CRACKLE, CRACKLE.....BOOM!
We all screamed.  The room screamed!
A huge bolt of lightening struck the water between the rail of the dining deck and the first boat docked at the marina!!
I think it was the closest any of us had been to lightening!
I found a aerial photo online and drew a diagram..... 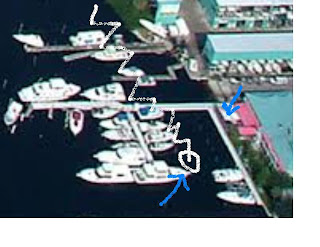 Paulette said…
That certainly was an exciting way to end a meal. Glad everyone is safe, what an experience.
May 25, 2012 at 6:49 PM

Bijou Sugar-Socks said…
now thats what i call fireworks on your birthday jeanne :) is karan the one you said just came by Gib? i love your pic of the storm a-brewin' :) so dramatic! belated happy birthday!
May 26, 2012 at 1:34 AM

Betsy@My Salvaged Treasures said…
That's just too close for comfort for me. Sounds like you had a wonderful celebration anyway. Happy birthday to you!
Hope you enjoy your relaxing Memorial Day weekend.
May 26, 2012 at 7:34 PM

❀~Myrna~❀ said…
Happy Birthday to both of you!I am glad the lightening missed you ,It was an exciting evening.
Happy Memorial day, too!
May 28, 2012 at 2:18 PM

A very exciting day to remember :)