October 28, 2013
Mr. Me has managed to evade all baby showers until this past weekend when he was brought, into the todays world where husbands share everything, including participating in the baby shower!

Fortunately it was not a shower in the traditional sense where diaper pins appear on clothing, prizes are awarded for winning quizzes about the habits of babies or unscrambling words like receiving blanket, onesie and nipple.

This shower was very elegant!
A storybook theme where all guests dressed as their favorite storybook character was very fun!


We were Huck Finn and The Fifth Chinese Brother
The honorees dressed as Snow White and Prince Charming! 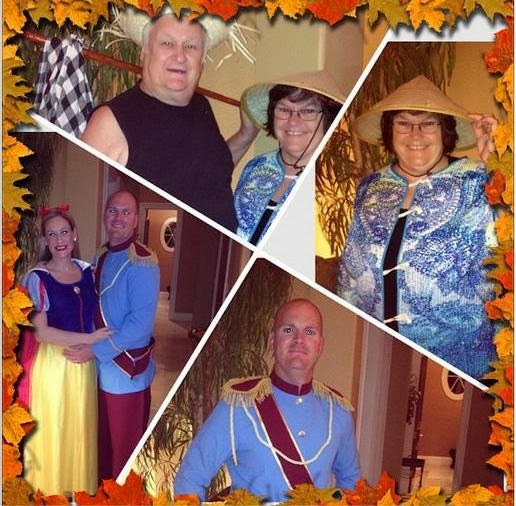 Out on the patio!

My nephew Rob and his lovely wife Lauren.
The shower was held at her parents beautiful home. 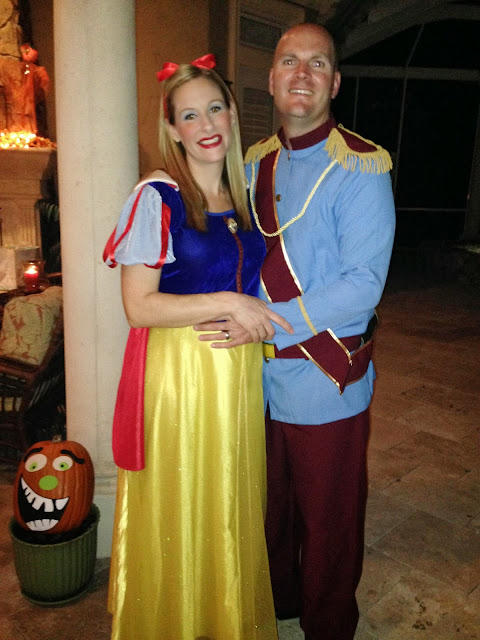 To the left the fireplace area...to the right  the pool

A close up of the decorated mantel out on the patio 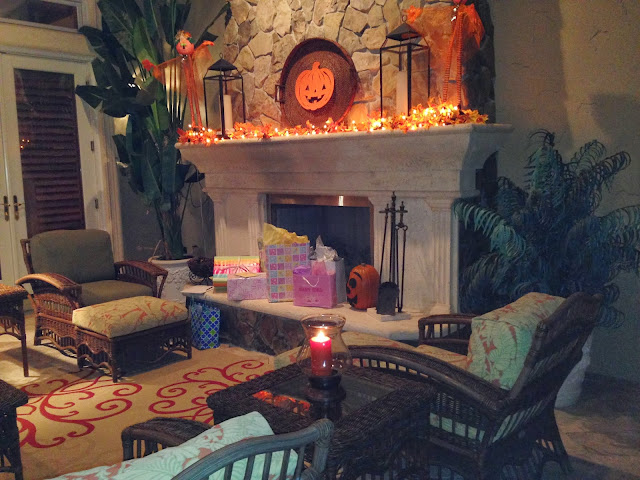 Seated , you faced the pool 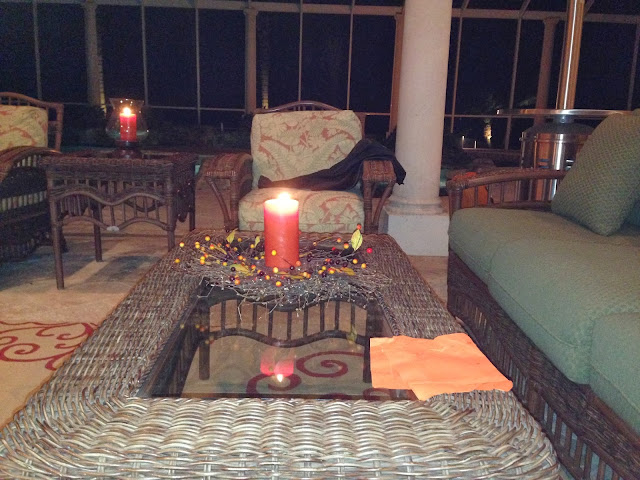 The volcano was burning especially for the occasion and the hot tub ready. 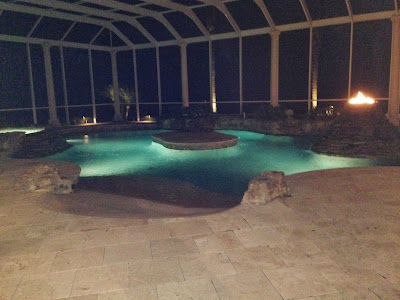 It was actually a little chilly out in the patio so the fire was very welcome! 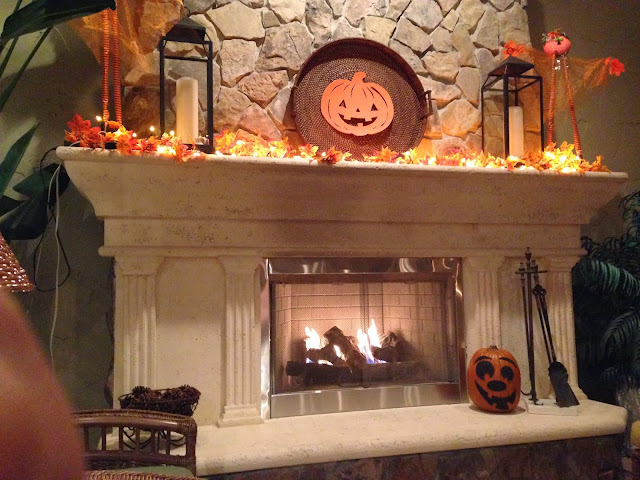 More storybook characters!  My sister dressed as the nun from the Madeline stories  and my mom was the Cheetah from The Lion King 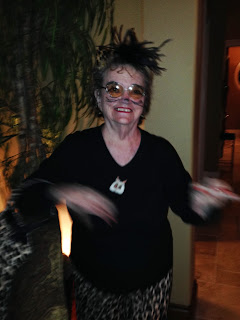 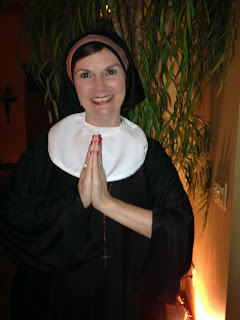 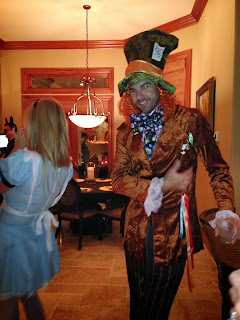 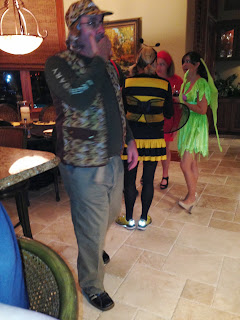 Bees, and fairy's and other storybook characters gathered in the kitchen!  There were about forty guests but I only captured a few costumes. A few rebels were here with other costumes, but most were from their favorite childhood storybook as requested.

Surprise!
The TV area off the kitchen had a row of fun tea lights marching across the mantel.  Pumpkins were everywhere as well as pots full of candy.   I admired the room as I waited for my turn with... Surprise!  The fortune teller. 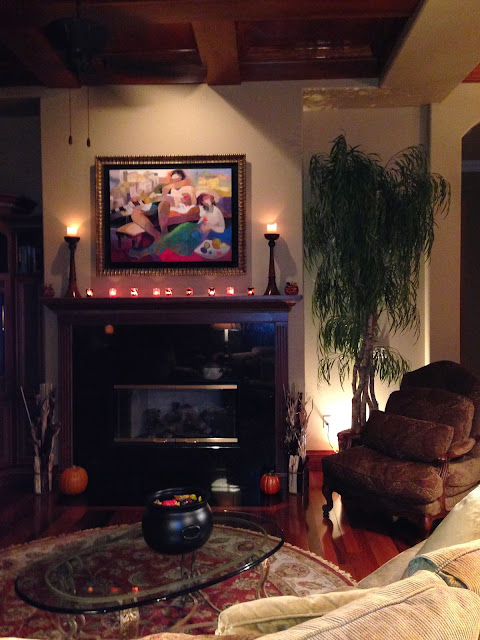 I was very surprised to find she was a real psychic! I anticipated a costumed gypsy regaling us with fake fortunes. This person was dressed normally, seated at a special table away from the crowd.  She was hired for the evening to tell the future of each guest.  She was a tarot card reader and apparently quite good.  All were astounded at her predictions and accuracy about their current lives.

Refreshments!
It's too bad that I hurried with my photo,  because I didn't get a really good photo of the beautiful refreshments.  Each platter had a huge variety of delectables both platters entirely different.  A large smoked salmon was served (head and tail included) along with fruit kabobs and two different platters of amazing bruschetta's.  A crystal bowl of beautiful jumbo shrimp stood on a silver platter along with a choice of dips.
Ghosts, and candles and fall leaves were scattered on the table along with the refreshments. 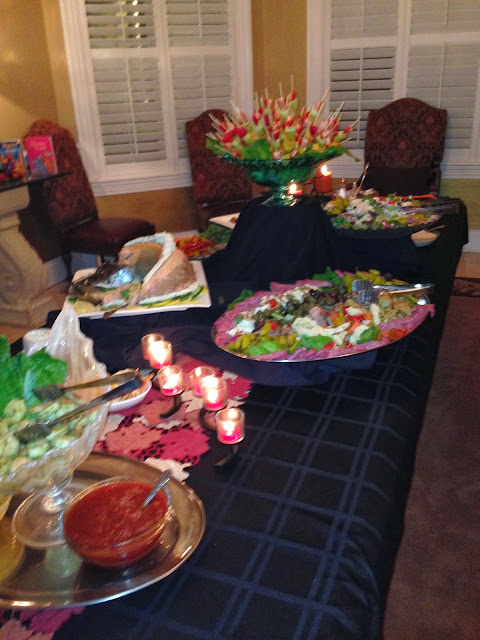 Tiny cupcakes piled high with frosting were served among the storybooks.  They caterer replenished it frequently as they were quite popular! 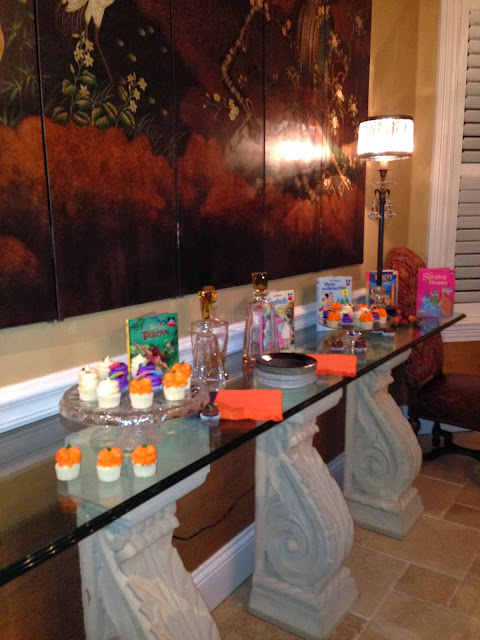 One platter of bruschetta.  Can you believe I missed taking one?  Too busy with my camera! 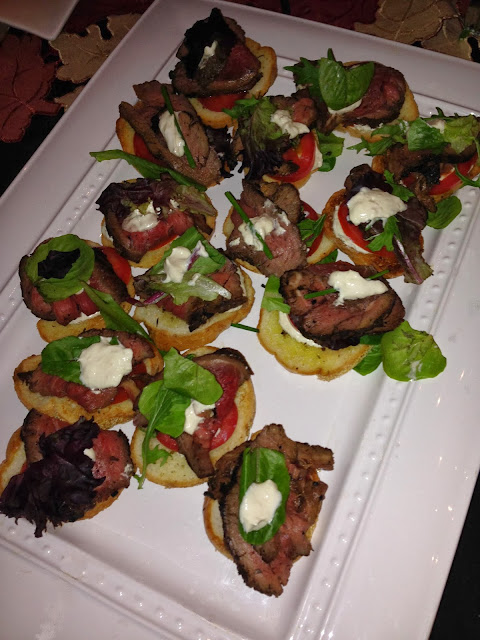 My plate, I picked the chicken salad, shrimp, salmon with dill spread, salami and several olives from the olive bar and TWO skewers of fruit!  Later I had two cupcakes as well! 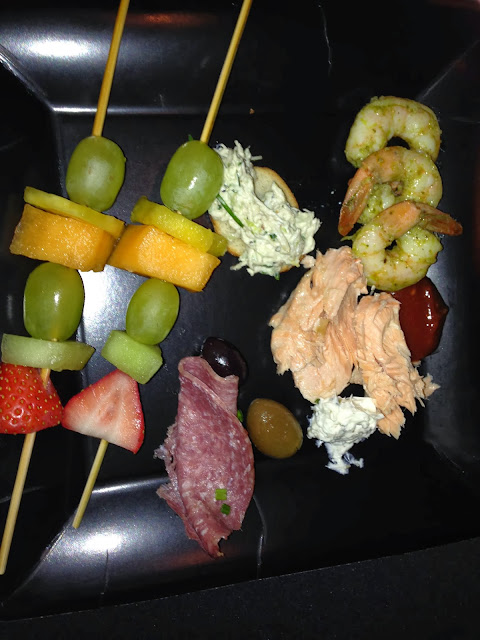 A full bar was staffed with a bartender to provide any beverage you wished for the entire evening
for all the guests   A group shot of all costumes would have been nice but that would have been very hard to do. 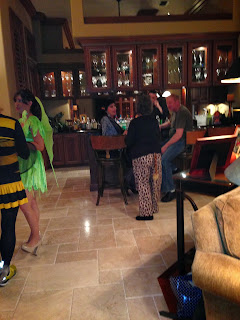 Little Everly, the new pink princess-to-come will certainly be beautifully dressed, and mostly in pink! 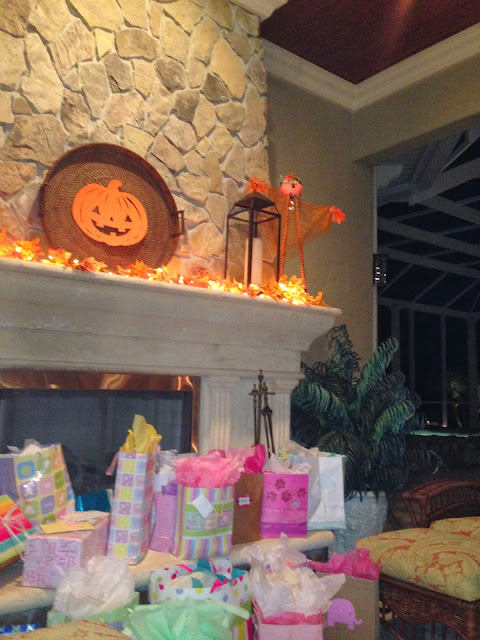 The Daddy admired each gift as it was opened and helped by moving opened gifts to the rear and stuffing mountains of tissue in a trash bag to keep order to the proceedings! 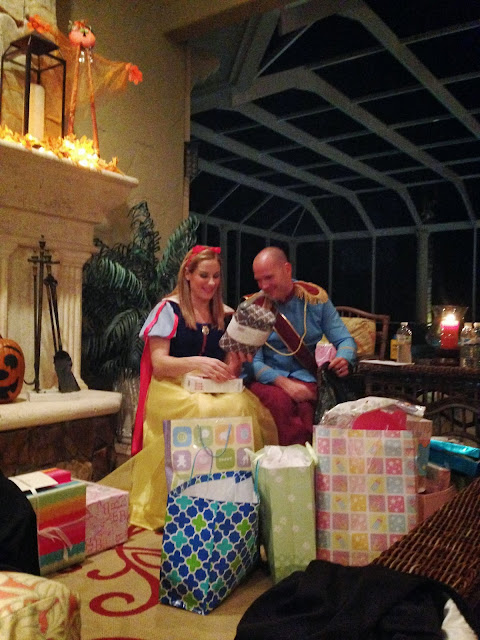 It was fun to watch all the gifts being opened.

When the midnight hour was upon us we left through the front foyer... 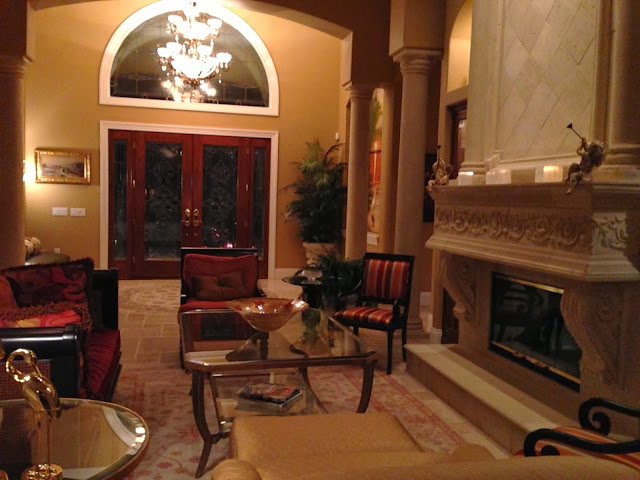 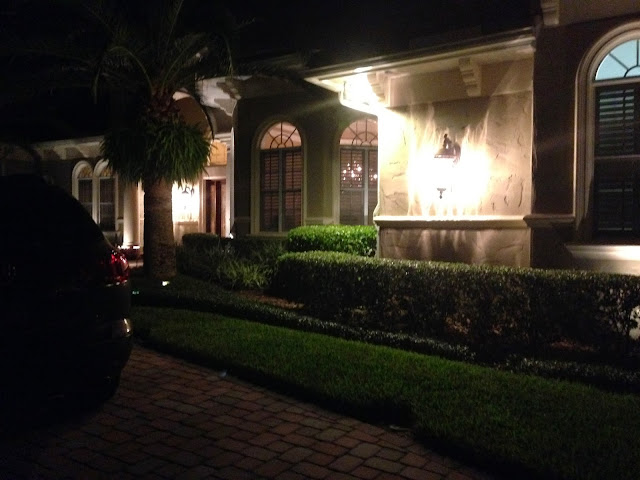 ...and turned back into mice and pumpkins as we drove away in our coach. 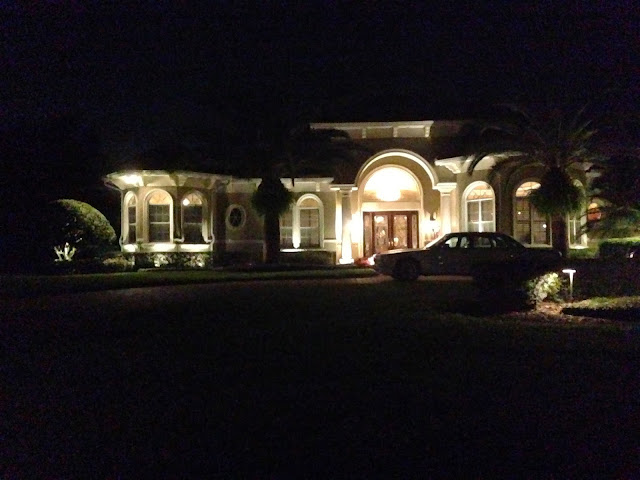 A lovely time was had by all!

Unknown said…
Thanks for the nice comment you left on my post about the Ludwigsburg Pumpkin Festival! The faces look look like they took a lot of time to carve!
October 28, 2013 at 4:30 PM

thanks for coming by my blog! Nice to meet you!

sandy said…
Soooooooooo much nicer then a baby shower. I truly hate the stupid traditional baby showers, the horrible games. Feel the same with wedding showers, soooooooo out dated. This looks like a fun gathering, good food, fun people in a gorgeous settings. PERFECT.

Kimberly Hutmacher said…
Great costumes, beautiful home, and delicious looking treats! Looks like a great time was had by all :)
October 29, 2013 at 1:30 PM

Marty@A Stroll Thru Life said…
Oh what a fun idea and all of the decor looked so pretty. Very creative shower idea., love this. Thanks tons for linking to Inspire Me. Hugs, Marty
October 30, 2013 at 6:06 AM

~Lavender Dreamer~ said…
What a beautiful home and a fabulous party. The costumes were very neat! What a great idea for a shower...looks like that got a lot of nice gifts! What fun!
October 30, 2013 at 7:27 PM

mispapelicos said…
Lovely idea, outfits and home, wowwwwwwwwwwwwww.
So you also have a baby coming soon, how fantastic, dear jeannie.
XXXXXXXXXXXXXXXXXX
October 31, 2013 at 10:00 AM

Glenda/MidSouth said…
Looks and sounds like a fun time with lots of good food.
Beautiful home.
Thanks for stopping by. We did not have a walnut tree growing up, but remember having to husk/crack those we got from a grandparents home.
October 31, 2013 at 9:12 PM

rebecca said…
Unbelievable! Just might be the private party (shower) of the year. That pool REALLY looks good to me - as does the fire...
November 1, 2013 at 5:04 AM

Mrs4444 said…
Wow--What a terrific idea for a shower; I love it! :)That would work well for a kids birthday party, too (if the kid loved books, of course). I've wished to have a similar party at school; I think teachers would love to dress up like book characters.
November 3, 2013 at 4:55 PM