A Jar of Really Old Buttons

October 17, 2013
I was looking for a nice size jar with a screw on lid and picked one up from the back of the rack at the Goodwill last week.  It was partially filled with some old buttons.  "Huzzah!" I said to myself as I put it in the cart, I'll look at them  later.

I have no idea about buttons except that I like them. 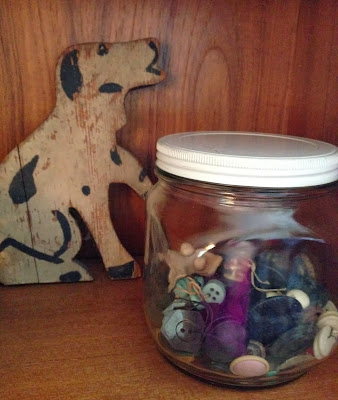 The jar is about 6" cubed.  It's not quite half full.
I've had the little dog for ages...picked him up at at yard sale years ago.
Maybe I should give him a name.

I poured them out and saw they were indeed quite old and not all in great condition. 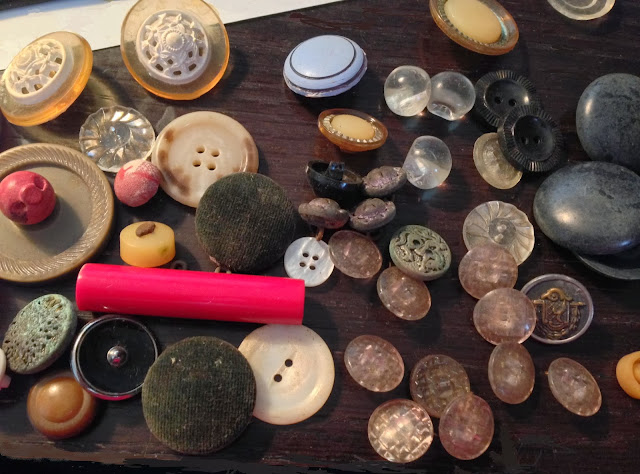 But I still liked them! 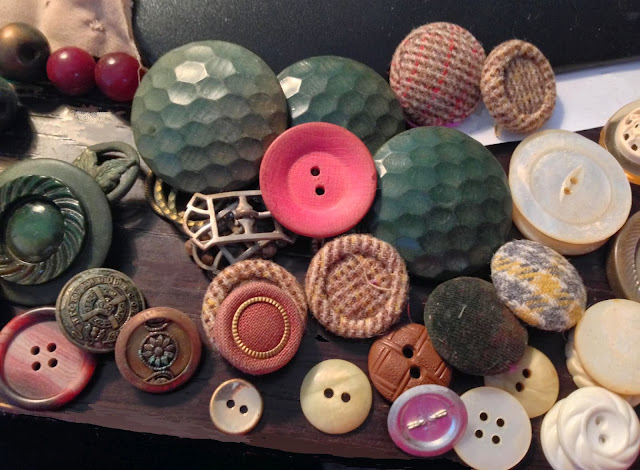 They would be fun to keep around 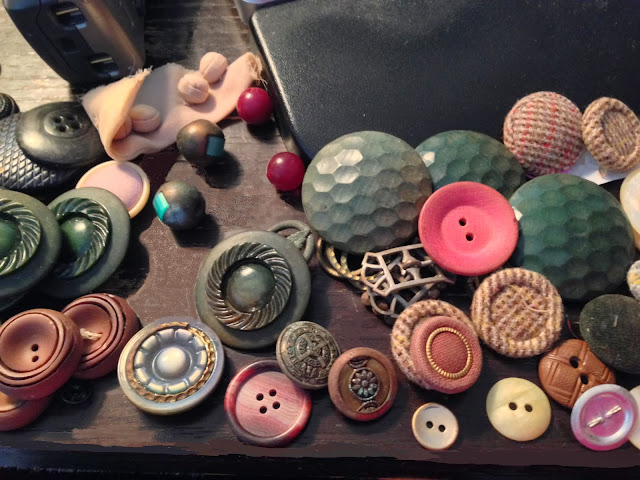 I took pictures of about half of the buttons

What fun they were to go through!

Janet Rudolph @ DyingforChocolate said…
I love old buttons, and I have my mother's and grandmother's button boxes.. love the idea of jars, though, easier and more fun to see. Perhaps one of the most unique uses of old buttons: Nana's chocolate buttons.. chocolatier in the U.K. uses grandmother's buttons for molds: http://dyingforchocolate.blogspot.com/2013/10/nanas-chocolate-buttons.html Love the dog in your post!
October 18, 2013 at 12:34 AM

Kimberly Hutmacher said…
You have some really beautiful buttons there. That is a great find :)
October 18, 2013 at 8:11 AM

Unknown said…
There is such a history here in the buttons you have. Look at those fabric covered ones that would have been on someone's best suit. I have a button collection that I'm trying to sell, but haven't been able to track down anywhere to sell them. You have a treasure here.
October 18, 2013 at 1:56 PM

~Lavender Dreamer~ said…
Those are so neat! I have a few from my Grandmother and they look very much like these. Enjoy your weekend!
October 18, 2013 at 8:29 PM

LV said…
When I am out at the antique places, you see lots of jars full of buttons. Some of them are real collectible. I do not know about them tho.
October 18, 2013 at 9:28 PM

I love buttons, my mom has one of those old machines to put the fabric buttons, was my grandmother.
What a beautiful collection, on their parents even have many wonderful antique shops.
Imagine how old are your buttons, two women like us who played and worked for makes them so beautiful .... A beautiful collection.
Kisses.
Deusa
Vasinhos Coloridos
October 18, 2013 at 9:32 PM

Ercotravels said…
Wow, how many varities, size, design and colors of the buttons..
such beautiful collection of the old buttons..

Judy Biggerstaff said…
Fabulous buttons Jeannie, I love unusual buttons to use in my craft.
October 19, 2013 at 10:45 AM

Leovi said…
Great photos, I love the buttons, as a kid I liked to play with the buttons on my mother boat, wonderful!

rebecca said…
Those fabric ones conjure up images of vintage suits - the kind I like to wear when I can find them in my size and good enough condition....
October 19, 2013 at 2:58 PM

Sue McPeak said…
Ohhhh you lucky girl...a great find in the buttons. I am somewhat of a 'Button Floozie' and I can tell you that the two white buttons at the top of the first photo are from the 30's and the backing on them are probably Bakelite. Certainly worthy of a special pin cushion or even a pair of earrings. Great photos of all the buttons. Enjoyed your post...Happy Pink Saturday.
Sue CollectInTexas BlogShop

Http://whatmeeganmakes.com said…
I LOVE vintage buttons. I have all of my grandmas and I just love to look at them. Thanks for sharing at Tickled Pink Times Two!!
xoxo
October 22, 2013 at 9:36 PM