...but no longer.  It's sunny here and although cold this week, the weekend promises to be warm and toasty.  Even overnight temps of 25 degrees don't scare me one bit.
So, since January has always felt blue, I'll embrace it.  Even here. In a new way. 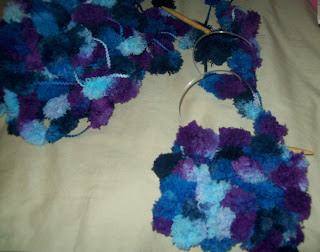 My knitting is blue.  My unfinished knitting.  It's Pomp a Doddle and is supposed to knit up fast but there is a little problem.  It doesn't pull out of the skein nicely.  I tried to roll it into a ball but began knitting when I realized a ball probably would not unroll well.   Well, the skein is now a tangled mess and will require time to find the end and I'll have to roll from the back end! 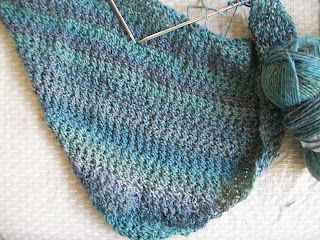 The Seafoam Shawl has not progressed as I hoped.  It was to be done by Christmas yet it isn't too much further than this.  I could be blue over it, but I'm not.  I was earlier this month.  I was going to just frog it and use the yarn for something else.  But now I just decided not to rush it. It's going to be a work in progress for some time to come. 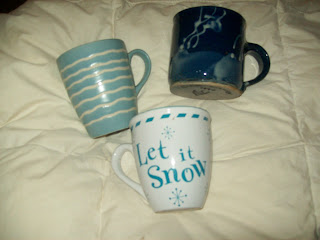 My thrifting has even turned out blue.  I'm putting away my Christmas mugs this week and replacing them with thrifted blue mugs. It wasn't planned, it just happened that way.   The top right pottery one was to be a stocking stuffer but the stuffee didn't come for Christmas after all so I'm happily drinking my hot coffee in it.  I love the blue glaze, inside and out, the size of the cup and the handle just fits my hand.  It was meant for me.
The bottom "Let is Snow" cup will be fun in my cupboard. It's blue inside.   It amused me to buy it  knowing it is snowing SOMEWHERE ELSE!  I want to constantly be reminded of that for this January as I bask in the tropical sunshine and move about sans coats and mufflers.  I know I'm obnoxious about Florida weather.  I might settle down next year.  But then again, I might not.
Todays find was the teal mug for $0.39 and it is a nice solid pottery mug. The artsy pattern just wowed me and the color called me over and said "Buy me!".   So I did.  I was in teal mode today.   As you can see. 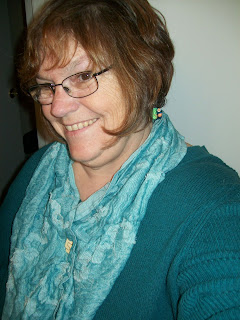 I'm going to love feeling blue in January, in Florida.

You'll find me FEATURED in this blog this week:  Cap Creations
What a nice surprise!
Visit the parties at Tami Amis , Thrifty 101 ,  and Apron Thrift Girl
blue in January January mug Pomp a Doddle teal

Bijou Sugar-Socks said…
i dont know how to knit and oh how i envy u! i love your blue mugs... they look like the start of a collection hehehe
January 8, 2012 at 3:53 AM