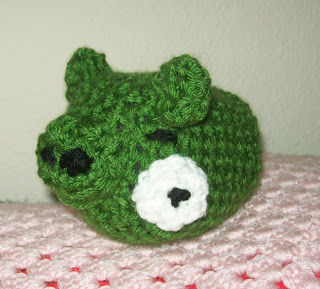 One of the two finished projects I did last month, but couldn't blog about because they were stocking stuffers.  I had fun making the Red Angry Bird, so I went ahead and surprised my grandson with two more. 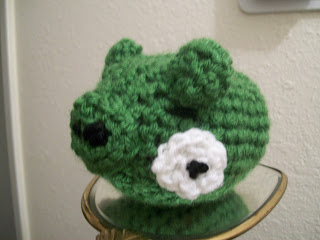 I don't know why a green pig is an Angry Bird, but then I don't play the game.  I'm not supposed to know why kids want something, just what they want.  These are crocheted patterns I found on Ravelry.com. 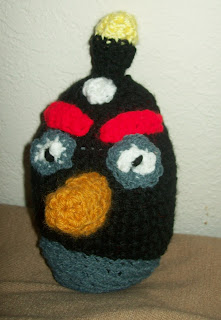 This Angry Bird is The Black Bomb Bird. 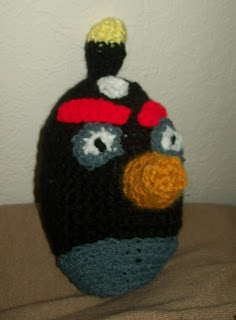 I believe he is the mean one...he looks like a real Angry Bird! 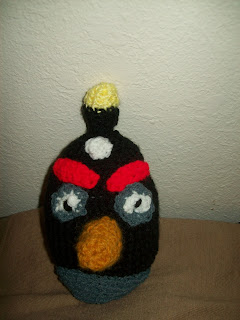 After making all three Angry Bird Toys I began seeing Angry Bird stuff everywhere.  It reminds me of the Troll doll fad.
If you would like to see the Red Angry Bird, you'll find it  here   .
Has anyone else made any?  Anyone play the game?

anointedtoday said…
Jeanne these are really nice. I remember my aunt taught me to crochet. I thought that was so neet. She would crochet white swans and starch them to sit upright.
January 15, 2012 at 4:41 PM

Katie @ Creatively Living said…
Those are great! My boys would LOVE the angry birds one!!!

Thanks for sharing it on Tell it to Me Tuesday @ Creatively Living!

Playmobil Pony Ranch said…
It is nice to see these angry bird toys. By the use of artistic ability, a beautiful crocheted angry bird was formed. I love this characters!
June 16, 2012 at 2:38 AM