Mickey's Not So Scary Halloween Party 2012

September 16, 2012
Turning 65 is not so scary after all so for Bill's birthday we took a quick trip to Disney World and attended the special event known as

Mickey's Not So Scary Halloween Party 2012! 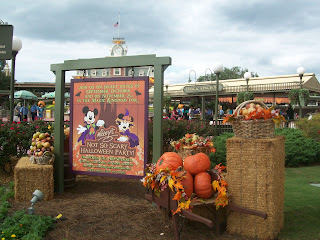 The park was dressed for the occasion! 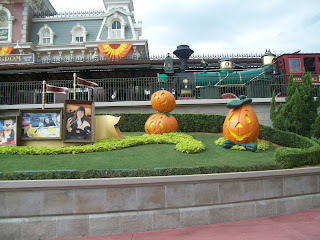 The ticket is good for 7:00 PM to 12:00 Midnight but a tip given to us by our resort check in person is that they start admitting ticket holders at 4:00 PM.  That's three free hours to ride rides before the party starts!!

We went on opening night Sept 11 and the park closed to regular ticket holders at 7:00 so by 4:00 the park was starting to empty out since mostly there were families with small children.  We only waited 10 minutes in line for two rides.  Every other ride was a straight walk on.  We sometimes rode twice, without getting off the ride because there was no one waiting to get on.  That was a little spooky!

At the entrance gate, cast members had special costumes just for this evening. 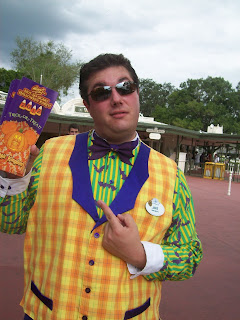 We received a special brochure and a trick or treat bag!
Everyone was in high spirits, this was the first night of the event this year! 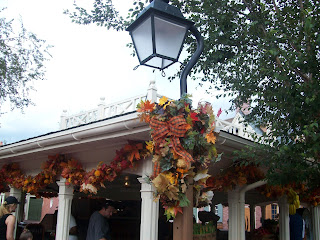 Everywhere there was bunting, garlands and wreaths celebrating the season. 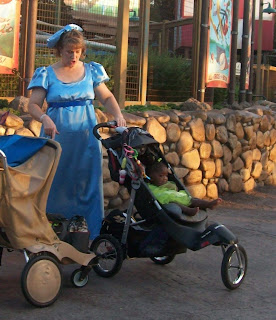 Tonight adults as well as children were allowed in the park dressed up in Disney costumes.  Here I spotted Wendy with her baby Tinkerbell! 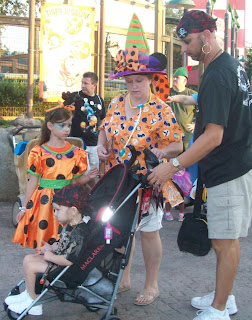 Every kind of costume was seen, from father/son pirates 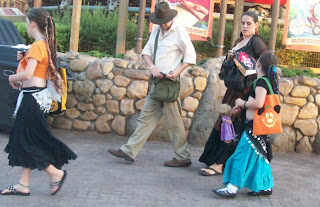 to families dressed up as movie characters like Indiana Jones and his harem. 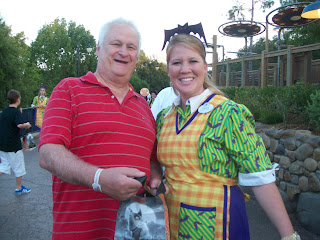 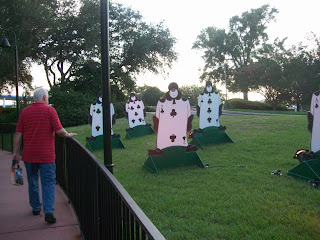 a path we never knew existed 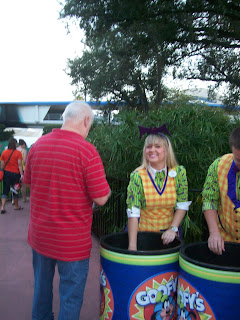 that had barrels and barrels of goodies for Trick or Treater's, young and old alike.  Each cast member dug deep and deposited a handful of traditional Halloween goodies in the special bags.  There were also other stations giving out candy all over the park.

In Adventureland at the Jungle Cruise ride you received treats AND a banana.  Don't miss that station!  Other stations also had special additional treats, but we didn't go to them all. Our bags filled up pretty quickly.

There was a big fabulous show in front of the castle after dark featuring all the Disney Villains who later came down into the crowd to shake hands and pretended to be Not So Scary!

The fireworks show was amazing.  We found seats just to the right of the castle on the walk way to Tomorrowland where the view was perfect.  There were long cement benches to lounge on while enjoying the bombs bursting in air.  It was a wonderful, extra long show.  Highly recommended to snag those seats!  The fireworks at times, so filled the sky they almost surrounded us.  The show was set to dramatic and spooky music though...and it the darkness that wasn't "Not So Scary!" 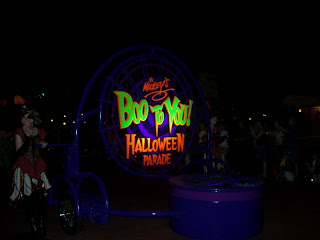 The park emptied out after that so the second parade was easy to find seats for.  We rocked on the porch in Frontierland until the parade started with a full view of the parade route.  Then we stood, (with no one behind us), at the rope during the 20 minute parade to collect candy from the specially costumed cast members and get a close up view of the dancers and floats.

It began with the headless horseman trotting down the street carrying his Jack O'Lantern head but I missed the shot because my flash failed.  (hanging head in shame)

But all the floats were themed for Halloween! 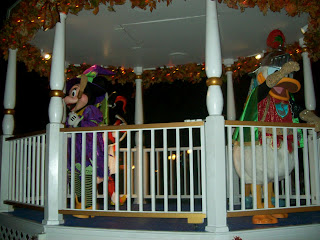 Even the Disney characters were dressed in Costume on a fallish decorated float! 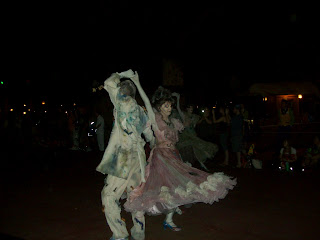 There were dancers from The Haunted Mansion, 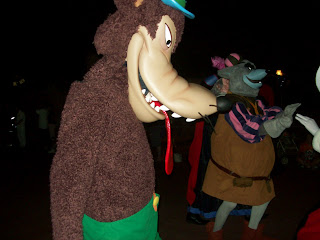 and the Big Bad Wolf and other villains were featured. 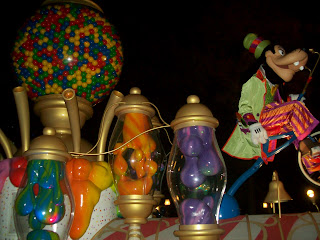 The float from Goofy's Candy Factory was definitely Not So Scary though and a dozen cast members surrounded it passing out good sized Mickey Mouse shaped suckers. 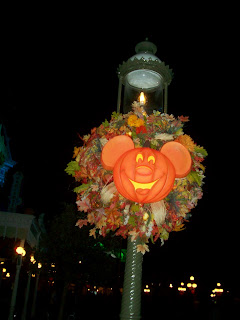 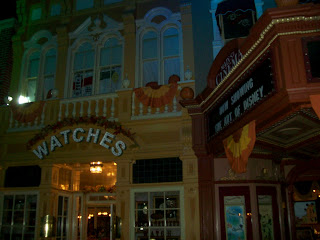 There were lit pumpkins on ledges 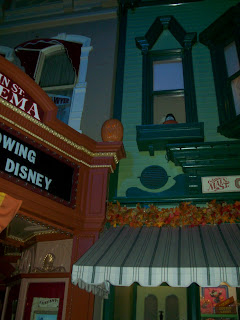 ...and decorations in the windows. 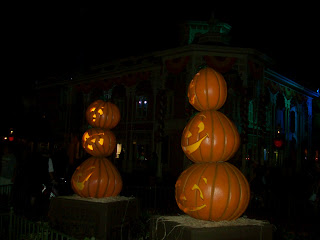 The park was filled with stacks of Jack O'Lanterns 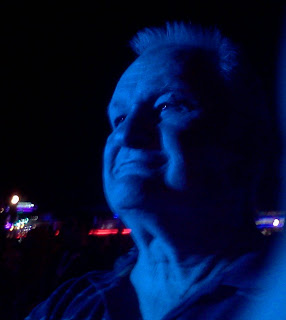 Bill turned 65 while watching Cinderella's Castle change colors at Midnight!
What a happy celebration we had! 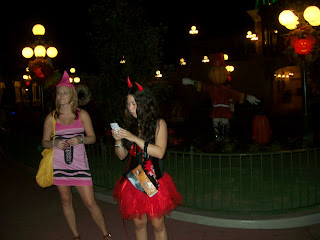 Tired, costumed revelers started gathering up their friends in preparation for departure close to the bewitching hour. 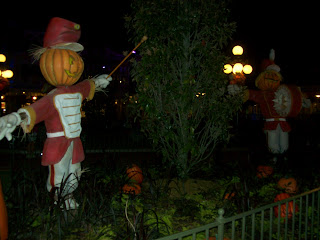 And the scarecrow at the entrance/exit of Main Street waved goodbye to everyone.

What a great night at Mickey's Not So Scary Halloween Party!  Tickets were $55.00 each and we rode every ride we wanted and covered the entire park in the eight hours we were there.

Disney World is hosting the event several times a week until Halloween.  If you haven't been, it's worth the ticket!

Dianne said…
Great pics! I want to go next time! :)

Diane Writes said…
Hi Jeannie! Happy 65th Birthday!!! You are almost of the same age with my mom.

I super enjoyed this post. Disneyland has always been one of my favorite places in the world. Though I haven't been to any Disneyworld in US, I have experienced the Disneyland in Hong Kong. I see familiar structures and your post awaken the kid at heart in me.

Thank you for linking up in my beautiful sunday series. I appreciate it and I hope to see you next Sunday again.

Whimsy and Juno said…
That looks like soooo much fun! I'm so jealous- I wish I could go to a Halloween party at Disney World! I'm glad you and your husband had such a great time- it looked like the best birthday ever!
xoxo Lauren
September 19, 2012 at 6:06 AM

Dee ⚜️⚜️⚜️⚜️⚜️ said…
How exciting for your husband (Bill) to celebrate his birthday in style!