September 06, 2012
Years ago I went out with a boy who was very interested in the San Francisco Earthquake.  He mentioned there was a fine thread running through San Francisco architecturally.  The great earthquake of 1906 left many buildings standing that the fire did not reach and they are intermingled with new buildings of that era and then of course newer buildings over the decades.  Although I never looked into it, it did fascinate me and I have often wondered about it. 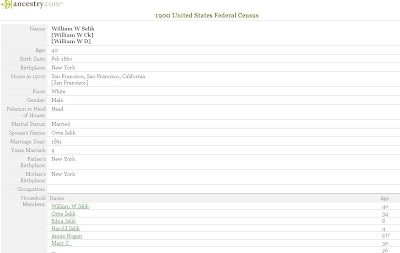 Over this past weekend I spent quite a bit of time looking at old census records that have been recently released.  I can see why I was unable to find my grandfather's family in the 1900 census record back in the 70's when I did a lot of research on microfilm.  The spelling of every one of their name is wrong.  Sometimes both names.  When I looked at the original record I could see that a large smudge practically wiped out the front half of the record and several above and below them.  I could barely read the name and I knew how it was spelled. 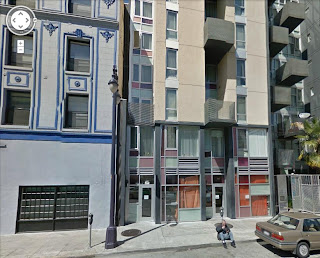 One thing I did find, that I didn't know, was the address where they were living at the time of of the earthquake.  133 Taylor Street.  When I looked at Google maps, this fifties style building is where they lived.  It is sandwiched in between a very early building and an even more modern one.  We knew their residence had been destroyed by the earthquake but not much more.  I also found a map that showed areas where fire raged and this location was one of them. 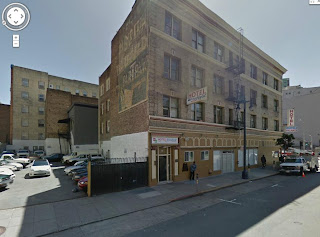 Across the street another very old brick building looks as though it may have survived the fire or been built about that time.  I wondered at the lot.  Perhaps never had been rebuilt upon.  I can only speculate. 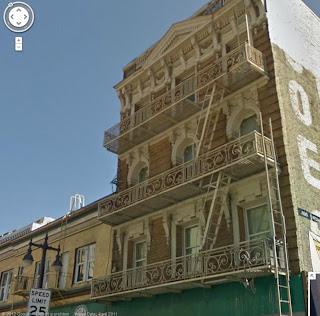 But it was this building, located also across the street that I thought might have survived the earthquake.  The ornate architecture looks to be old Victorian.  Were scrolled balconies and fire escapes original or placed later?  I like to think my grandfather was a part of this neighborhood and this was a sight he saw daily.

.
Interestingly enough, awhile back I saw this video on YouTube.  It's a movie taken on Market Street in San Francisco just four days before the earthquake.  I often wondered if any of the people were my relatives, especially the young newsboys. But would a young boy be out alone, downtown wandering around playing or working?  My grandfather was about ten at the time.
It's actually possible.  My heart beat a little faster when I saw that133 Taylor Street is only a mere block and a half from Market Street and 13 blocks from the Ferry Building you see at the end of the street.

Unknown said…
That was one of the most enjoyable posts that I have ever came across. I love the lawless chaos that is taking place and yet it all seems to work out just fine. Funny that no one is concerned for the trolly strolling along but they sure do dodge the cars. I am going to have to watch this again tomorrow and even share it with others. GREAT POST!!!!!!!!
September 7, 2012 at 1:06 AM

Rebecca said…
I would love to see the "painted ladies" of San Francisco up close and personal!

bj said…
Don't you just love family history? Me, too.
A cousin has traced our history back pretty darn far. Back far enuf for me to join DAR's.
It is all so interesting.

Honey at 2805 said…
Your research is certainly thought provoking! I also do family research and find it amazing the discoveries you can actually make!

Thank you for sharing your creative project at Potpourri Friday!
September 9, 2012 at 1:55 PM