Something New to do at Disney World

September 30, 2012
While in Disney World Bill and I did some hotel hopping.  We visited three of the hotels on the Monorail line.  It was a lot of fun to see the inside, the gardens and pools.  We have seen them from afar for many years but never had the time to take the tour.

While at the Polynesian Resort we impulsively rented a little boat and went out on the lake, cruising by the Disney World entrance!  Who knew this amenity was available to anyone, not just hotel guests.  There is a fee, but it was quite reasonable, especially by Disney standards. 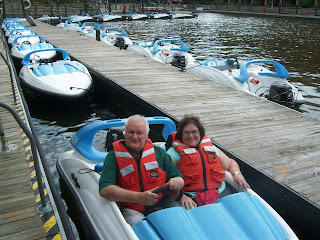 We also went by the Disney's Contemporary Hotel and under the Monorail itself! 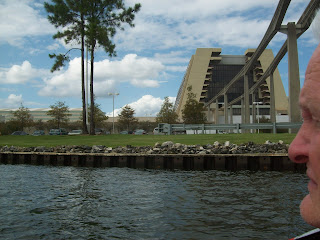 It wasn't until we were out in the middle and on the way back that I noticed the clouds were darkening and a storm was 'abrewing! 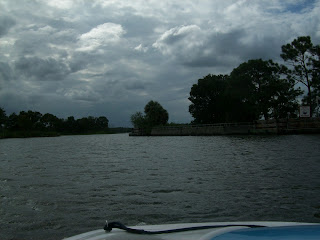 We made it back in the nick of time with only a sprinkle of rain.  Far less rain though,  than the boat spray in my face and the gallons that splashed in over the edges!  :-)

A one minute video of our speedy ride!

When taking the tour, the monorail will stop at three hotels and you can get off an on again going to the next one, but each hotel also has a boat that goes to the Magic Kingdom.  These are boats only hotel guests usually get to ride so at your last hotel, choose to return via shipboard!  Just an added bonus 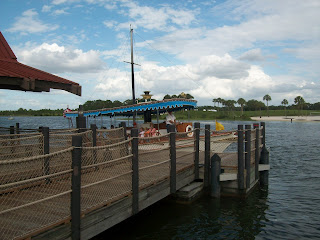 I had often seen this happy little ship navigating the waters while riding on the lumbering ferry that takes hundreds of guests at a time,  but never imagined I would be on it.

Jana@Transformations From the Heart said…
Oh, it's been years since we went to Disney. I hope to go back again some time when we actually have TIME to see and do more.
Sounds like some great tips~Thanks for sharing them, will keep them in mind IF we get to go back again.
September 30, 2012 at 8:26 PM

Janet said…
That's what I like about Disney World, all the lakes and it's so spread out compared to Disneyland. Looks like a lot of fun!
October 1, 2012 at 6:57 PM

cathy@my1929charmer said…
We haven't been to Disney in for.e.ver, and you "speedy" ride seemed like a lot of fun. So glad you are enjoying your time, and the weather look so pretty! Thanks for sharing your inspiration with Sunday’s Best – you helped make the party a success!
October 1, 2012 at 8:29 PM

I liked your video. I'd love riding in boats. Cute picture of you and your husband in Disney World.