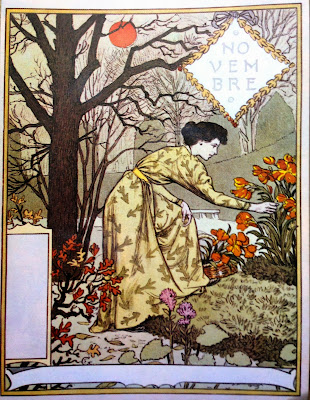 The year is definitely coming to a close as Sweet November opens.  It's hard to believe
2013 is almost gone.  I get a little nostalgic at this quiet time of the year
rather than late December because you see the handwriting on the wall and you know the
close of the year is coming.
After a hectic series of holidays I'm ready for the new year but not now.

This week we celebrated a birthday...a little late but at her convenience!
We always have a nice time when we are together. 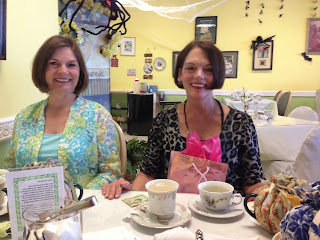 My sisters Karan and Janet (holding her PINK birthday gift)
and below, my mom and I. 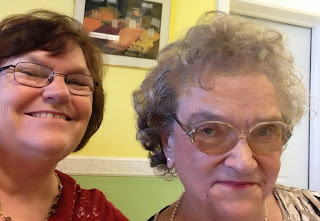 We went again to tea at the Magnolia Terrace Tea Room where last year we had a wonderful time
But they must not be doing well because the servings were much smaller but the price jumped twice as high.
It's hard to believe this tea tray plus 4 pots of tea and 2 teacups of soup came to $58.00

Last year's tea party would have cost $24.00 but we had a groupon so we only paid about half that. The meal last year was twice the portion size at half the price.  But we made the best of it.
So, on a much cheerier note.....

Today I tried a new recipe!
That is not a biggie for most of you but I don't love to cook and haven't tried a new recipe in ages.   I do invent recipes sometimes to use up leftovers but as a rule I can't quite get the knack of collecting all the new ingredients and then still have the motivation to make the recipe a few days later.  I think I put the ingredients on my shopping list in mid October and today got around to actually making it.  That is a very speedy turnaround time for me.

It was delicious with the Chili I fixed.  I liked the Chili served over it and Bill liked it alongside his Chili as a side dish.
I saw the recipe here and it looked so good!  Much too much for two, so I am testing it by freezing all the leftovers until the next time Chili is on the menu.

It was a perfect meal for a rainy November day!

Diane Writes said…
Is it your sister's birthday you are celebrating? Belated Happy Birthday!

Lovely photo of three women :) I remember the restaurant. You blogged about this already. Cupcakes are so so love for me. Teehee

Wishing you a great weekend Jeannie! Thank you for linking up in my shy and quiet series.
November 3, 2013 at 1:09 AM

Tea in the Library said…
Love cornbread with chili so your corn casserole looks like a sure fire winner to me. The tea sounds disappointing. Hope their business picks up and things go back to bountiful! Happy Pink Saturday!
November 3, 2013 at 8:25 AM

Tea in the Library said…
I just printed out the recipe. By some miracle I have all the ingredients!
November 3, 2013 at 8:27 AM

~Lavender Dreamer~ said…
How wonderful to spend special times with your family. We're having chili tonight...this would good, too! Enjoy your Sunday!
November 3, 2013 at 8:46 AM

Ivy and Elephants said…
What a lovely family! Glad you had a good time (even though you had to stop off for food on the way home! LOL) Thanks for the recipe.
Hugs,
Patti
November 3, 2013 at 11:20 AM

Kimberly Hutmacher said…
I'm afraid your tea room isn't the only place doing this. It seems everywhere we go to eat we're finding smaller portions and higher prices. I wouldn't mind the smaller portions so much since it used to be that restaurants gave you more than you could/should eat, but I would love for the price to go down, too.
November 3, 2013 at 12:49 PM

Gemma Wiseman said…
I must admit, maybe in the heart of Melbourne, food prices may be highish in restaurants, but on my Mornington Peninsula, beautiful food is complemented by reasonable prices. It can happen. Gorgeous photos.
November 3, 2013 at 4:20 PM

Leovi said…
I like the food, very good!! Happy Birthday to your sister!

Seems the tea room is a sign of the times. It was rather pricey for what you received which is too bad. Hopefully, next time you visit, it will be the way you remember it. Thank you for sharing this with us and have a wonderful new week.

betty-NZ said…
Family times are so important and it looks like you all had a great time! I love corn bread, but have trouble finding corn meal here in New Zealand. Most time I have to settle for corn flour :(
November 4, 2013 at 5:29 PM

I just showed my husband (who loooves corn recipes) this post and he wanted me to ask you to share the recipe if you wouldn't mind?

That looks so good for a Thanksgiving dish - or at least a fall dish.

Creations by Marie Antoinette and Edie Marie said…
Love the birthday pics of you, your sisters and your Mom. Your Mom has the cutest sly expression on her face, adorable!

I always make a corn pudding at Thanksgiving that looks much like your corn casserole. MMMmmmm so good! Great idea to have it with chili Jeannie Marie. We'll be trying that.

Claudya Martinez said…
This time of year makes me feel nostalgic as well. Wow, I can't believe the jump in price of the tea service.
November 17, 2013 at 12:06 PM