November 23, 2011
It's so easy to order your Thanksgiving pie from your favorite restaurant or bake your own from the freezer at the grocery it's a wonder people still bake from scratch.  The fact is they asked me to bring a ready made pie but I scoffed at that and said, oh...I'll just make some, pie crust is easy. 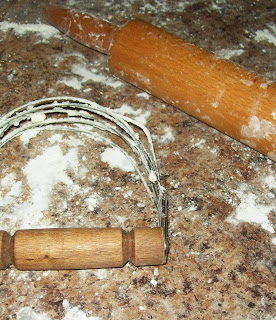 It's also the shock of discovering that in the attempt to scale down I only brought two pie pans with me to Florida, but volunteered to make three pies. 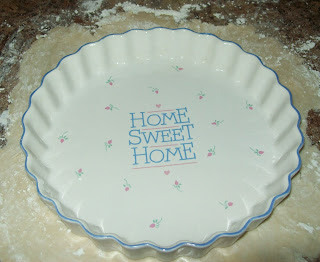 Hence, my pretty baking dish from Shelly, that I have kept almost pristine by NOT baking in it was pressed into service for the apple pie. 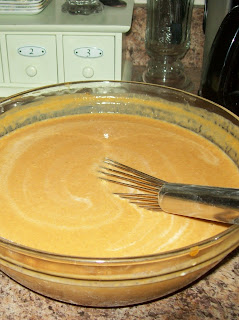 The pumpkin pie filling was fun to do.

Even though they were baked in weirdest pie pans ever.  I found them in the back of the cupboard in Ohio, brand new with the tags still on them so I left my Pyrex and my good metal pans behind and opted to keep the new ones that had a nonstick coating.    For the life of me though,  I don't remember ever seeing them and now that the pies have to be served in them, why I would buy such odd looking pans? 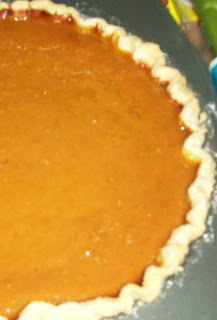 They baked up pretty nice though.
I found out later, while my pies were cooling there was a massive recall on Food Club canned pumpkin.    I was so relieved to run and check and find out I had purchased Libby's.  I usually do, but I'm not above generics or store brands if the price is right. 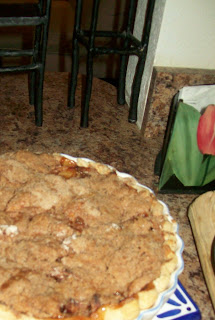 I tried my hand at making a streusel topping for the apple pie and it boiled over a bit, so my baking dish has been broken in.  I had to borrow brown sugar from my mom, then after the Mr. went after it, I discovered I had brown sugar.  I then looked up the recipe and it said you needed white sugar, which I had too much of and still had purchased another bag.  So I have plenty of both brown and white now.
All in all, I'm pretty happy to be done with the pies. 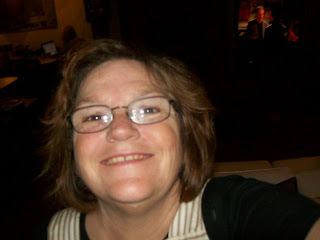 Onward to the stuffing.

Jennettehogan said…
Those are the same pies that Kaytlin made yesterday! Although she only made one pumpkin. I wish we could be there for Thanksgiving this year. We miss you guys!
November 24, 2011 at 8:18 AM

Ralph said…
We give thanks for our family time together, with conversation and food to be enjoyed - in that order! So, the beauty of pie and presentation is of no consequence, your all being together is what matters most. Besides, a perfect presentation is that for only a moment - dig in and enjoy! Happy Thanksgiving!
November 24, 2011 at 12:13 PM