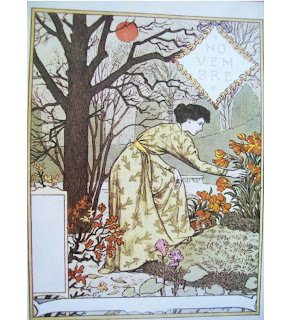 I've always been a thrifter, even as a child my favorite store was what we called the junk store on Chestnut Avenue.  This was in the days before yard sales or before I knew about them.  I loved to sift through the tables piled high with old junk that I remember being mainly car parts and boy stuff.  But there were tiny treasures to be had, old broken jewelry, treasure boxes, comics by the bundle.  The store was dark and dusty and the proprietor didn't mind children picking things up and moving them.

I filled house after house over the years with my yard sale finds, a perfect quilt from the 30's back in 1975 for $5.00 from an elderly person who was sick and tired of it being on her guestroom bed, a curved top trunk I kept for more than 40 years that sold for more than I paid for it and necessary items, like clothing, that we wore and resold.

Now I have downsized and sold and given away more than half of what I owned, I love the freedom of not having so much "stuff" but the thrill of thrifting has not left me.   This past weekend I dared to step into a storage unit sale.  It's three large storage units turned into perpetual sales, open every weekend.  I passed on the life sized mermaid reclining, bare breasts and all, and the tables of pure junk without a qualm.  None of the lamps, furniture or dishes enticed me at all.  Until I saw the little stack of melamine trays.

During the move I discovered a packet of post cards of some Eugene Grasset art that I picked up in Germany in 1991 at a thrift store (yes, they have them in other countries!) .  I was always going to frame them as a group but they were "misfiled" in one of my many boxes and I lost track of them.  When they surfaced this summer I was happy to know I still had them and I took them with me to Florida. 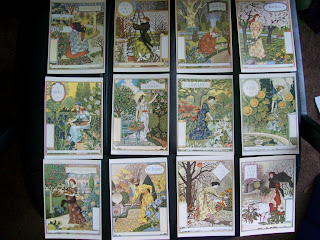 As I was leaving empty handed on Saturday, I spotted a little stack of melamine trays. 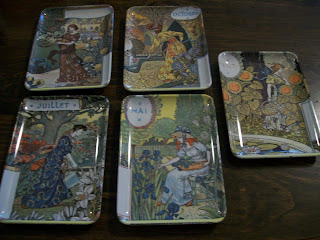 Unbelievably, they were the same Eugene Grasset pictures.  There were only five, not the twelve months of the year as my post cards, but I had to have them.  I didn't quibble at all over the price of twenty cents each.

And look!  The Melamine trays were made in Italy! 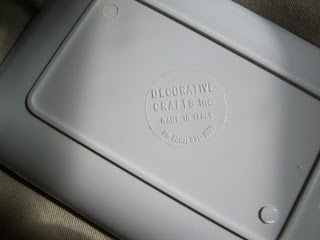 I've used them a dozen times already and it's only been three days. They are perfect for snacks!   It's now one of  my goals in life to find the rest.

In my search so far I haven't found any of the melamine trays but I have found the post cards on ebay.  The description reads:

DESCRIPTION: Beautiful SET of 12 POSTCARDs depicting each month of the year.    The artwork is by Eugene Grasset done in 1896.

They are asking $74.50 for the set.  I paid forty cents each back when.  Their set is perfect, my set has a crease on August (Aout).  Diminishing the value to all but myself.  I did, however find a single post card (April) for sale ($4.99) so there is hope I might be able to replace my creased one.

I'm thrilled! I'm thrilled with the value of the cards, the fun of the Melamine trays
eugene grasset melmac post cards thrifting

Vanessa said…
Cool discovery! I inherited my aunt's postcard collection and love to look through it.
November 16, 2011 at 2:37 PM

Kelly said…
I found a few of these melamine trays as well, and I've been searching high and low to complete my collection too! Which months do you have?
August 19, 2012 at 1:30 PM

Jeannie Marie said…
I have just the ones shown, May, July, Aug, Sept, Oct. I haven't seen any more since I picked these up.