What I Wore - Fail

November 20, 2011
Well, what I wore was a semi-fail really.  Bill was complimentary when I came out and twirled and he took my picture this morning: 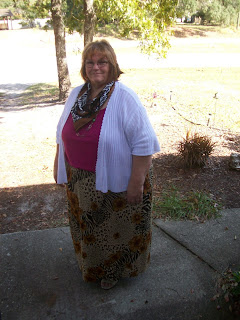 But I had an issue with the Grasshoppers.    There is Velcro across the top of the shoe.  It's designed so you can adjust the shoe for a wider or narrower toe.  I adjusted it and when I climbed into the truck one of the toe straps popped open!  I reattached it (puffing a little) and we left.
We stopped for mints and I went in to get them and when I got out of the truck, it popped again!  Rats!  I ignored it.  Big mistake.  The shoe flapped as I walked in and I felt like I did when I was 10 and my saddle shoe sole flapped.
Inside at the register I pretended I dropped something, hurried and reattached it, paid for my gum and left.  It popped open on the way to the truck...flap, flap, flap.
By this time I felt hot and out of sorts.  The windows had to be down and we discovered the new church we were visiting was on a dirt road.  Choking on the dust, we turned in and I wanted to reattach the shoe in the car but it was a tight space.  It was then I suddenly noticed the pink berries in the skirt were bright red in the sunshine.  Next to my pink shell the color clash hurt my eyes.
I could have chosen the black shell, with the cotton shawl!  But no.  Now, sitting in the sun this white shrug I became sweltering hot!
I opened the door to fix the dang shoe again and one lady standing in the parking lot craned her neck to see who we were and what we were doing.  I quickly closed the door and told Bill we were leaving.  He didn't argue but pulled out.  A bit quickly and roared up the dirt road.  OK, he didn't roar but drove faster than I would on a dirt road belching choking dust.
The breeze cooled me off and I felt remorseful.   I shouldn't let a bum shoe keep me from worship so we turned back and by then everyone was inside.  I fixed my shoe (unseen by others) and we went in.  The shoe held together during the entire service.  There was a supper afterwards, but we hurried out because we didn't know them and we had a lunch shop to do.
When I reached the truck....the Velcro popped.
And continued to pop, pop, pop all through lunch. 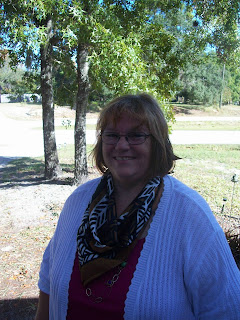 Willis Family said…
Can't...stop...laughing! I am surprised you turned around. When you fell on the ice in front of everyone we still went in to the church. Well then laughed through the service and never went back. Are you going back? Sounded like an interesting church. Maybe you should blog your church visits with pics and tell what you liked/didn't like.
November 20, 2011 at 9:47 PM