November 18, 2011
Thrifting will score you books from your childhood that you always wished you could own! 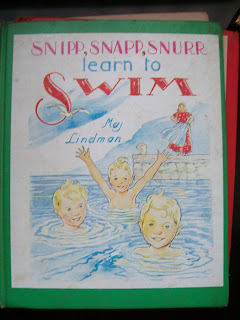 Yesterdays post was about the triplets Flicka, Ricka, Dick that Maj Lindman wrote about. Today I bring you the companion books to them, a series of books about Snipp, Snapp, Snurr!  This series was just as entertaining to me as a child even though it was all boy adventures.  The boys seem to get into more misadventures than the girls! 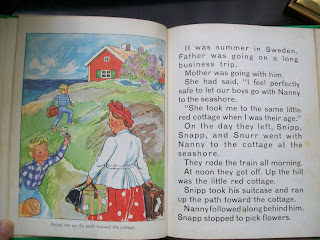 Isn't she a comfortable looking Nanny?  I would trust her in a heartbeat! 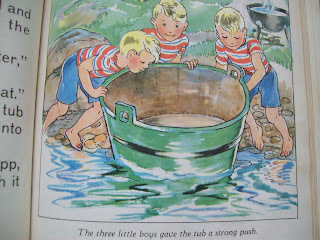 Keeping track of three little boys, though, isn't easy at her age! 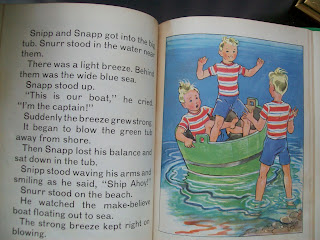 They push the washtub into the water and off they go!  So off they sail, out into the sea and Nanny is frightened, but they are rescued.  Suddenly the summer turns into swimming lessons for the boys.
I like how the author, Maj Lindman shows why there is need for learning how to swim and then the practical application. 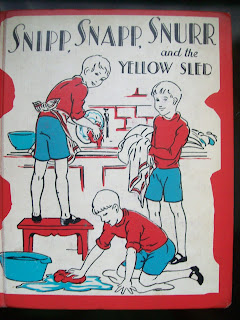 The boys can be as kind as we saw Flicka, Ricka, Dicka behave in yesterdays post, not in a sissy way either! 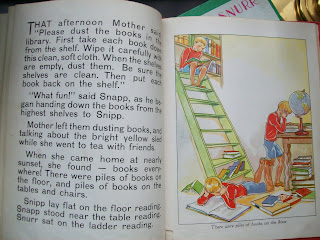 Back in the day,  children actually worked for things they wanted, like a yellow sled....or were given jobs anyway!  I love how the job of dusting the bookshelves became an afternoon reading session! 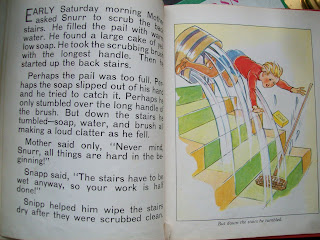 Some of their jobs were not so easy!  This is exciting and scary stuff for us young ones to read! 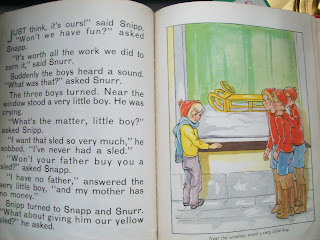 When they go off to purchase the sled the boys are touched by the plight of the little boy who has no father and also yearns hopelessly for the sled.  They confer together and decide to use their hard earned money and buy it for him.  They then share an afternoon on his sled with their new friend. 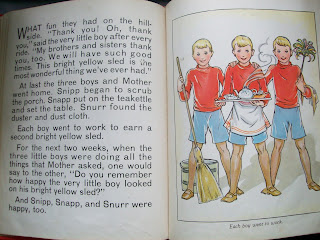 The story ends with the children starting over and begin earning money for a sled for themselves.
****************
What a good moral!  No one gave them a sled because they were unselfish.  That's how a story might read today.  No, they buckled down and went back to work.  My hat is off to the author/illustrator Maj Lindman.
Don't you agree that if someone gave the three boys a sled because they were unselfish that their gift would no longer be a gift from them?  How many parents unwittingly have done this in an attempt to reward their children for being unselfish?
******************
These two books were found at a "last chance" Goodwill thrift store where you could actually watch the bins get dumped into trucks to be hauled to the incinerator.  Prices were rock bottom as many scrabbled to go through them before they were picked up. I'm going to miss that thrift store. Many times the items weren't last chance stuff because when other Goodwill stores were full they routed unopened donated bags here.  It was a treasure trove in the days when I eBayed!