June 12, 2012
I tried my hand at a couple of miniature gardens.  One is in a large pot outside my patio door.  It started out as a moss garden and I happily found rocks and branches and arranged them.  Then I had to break off a branch of a Schefflera in the front garden.  The branch was so large I didn't want to just toss it away so I stuck it in the soil  in my moss garden to enjoy until it died.  Much to my surprise, it rooted and is now thriving. A feathery plant took root and some clover, so it is much more attractive than when it was only mossy items. 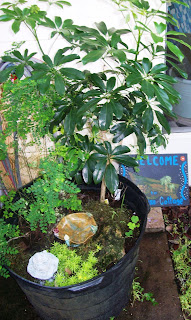 The cute bowl I purchased while in South Carolina did indeed become a tiny birdbath.  Instead of being a birdbath though, it is a place for the tiny frogs who found their way into this garden.  How appropriate! 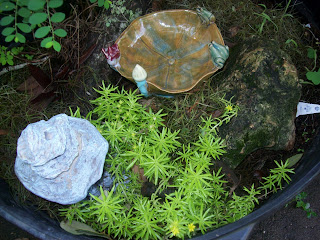 The other tiny garden is much smaller, measuring only 8 inches in diameter and it resides indoors 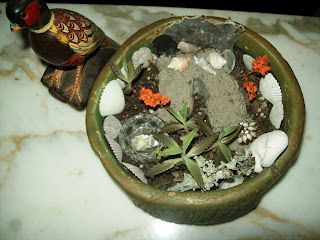 It boasts a double walkway, one leading to a "salt celler" pond, the other leading to a rock sculpture where a treasure of clustered opals have been gifted to the gods by unknown fairies. 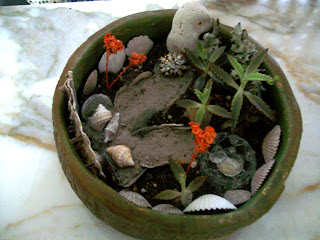 Where the path joins I've placed tiny seashells I picked up at Honeymoon Beach against a large multi colored shell.  The plants are cactus that thrive on neglect and yes, they are actually growing.  I see little buds on the tips.
These two experiments were fun but we'll see how long they last!

Linking to:
Tell it to Me on Tuesday
Show Me What Ya Got
Be Inspired
Trash to Treasure
Raising Oranges
birdbath frog minature garden moss garden plant schefflera

Erika said…
Oh Jeannie, this is very cute, it is small and looks awesome, did not know one could do it in such a small scale, this is a great idea, I will be trying it myself if you don't mind. Thank you for sharing.
June 12, 2012 at 1:28 AM

Jill said…
We are just in the process of getting our old birdbath filled with succulents, first time to try it so hope it works!!
June 12, 2012 at 7:41 AM

Anonymous said…
Jeanne, as said before you have a great sensibility - ie you are a cheapskate (something to be admired - OBVIOUSLY) and you make interesting and beautiful things from your recycled treasures.