June 06, 2012
On the way home we drove down through the Charleston, SC area on HWY 17 and passed many stands where people were selling hand crafted sweet grass baskets.  The roadside stand is a tradition dating back to 1929 when the bridge connecting HWY 17 to downtown Charleston was opened. 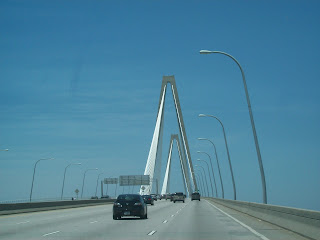 Lottie “Winnee” Moultrie Swinton had the first stand, of sorts. Now there are several dozen on either side of the road.  Most were empty, but we stopped at the the third and last stand open for business that we saw before crossing the bridge into the city.

Sweet grass baskets are a tradition of many centuries brought over via the slave trade.  Now as many as three hundred women in the area produce a quality handcrafted basket featuring sweet grass and pine needles. Many are sold at the Market in the center of town.

I stopped at the stand of Elizabeth Cooper Eady who has been making baskets for fifty years.  She learned from her aunt Catherine Cooper Johnson.  Elizabeth is the master weaver in the family and she teaches the younger family members.  She and her two sisters filled the stand with dozens of baskets each more beautiful than the last. 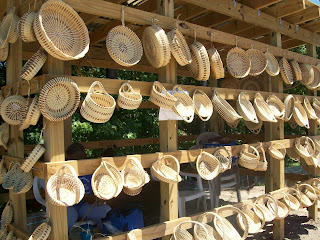 Elizabeth was personable and chatty.  She demonstrated how the baskets were made with a simple tool, an ordinary spoon handle.  The bowl of the spoon is gone and the narrow end punches through the ring of sweet grass.  Then a strip of palmetto leaf is easily inserted and pulled tightly. to keep the coiled ropes of sweet grass and pine needles together. 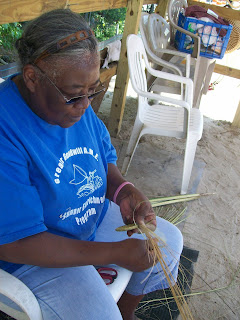 All three sisters weave the same style baskets, so each basket has to be marked with their initial on the price tag.  The basket I chose was one of the designs that only Elizabeth makes, out of the three sisters. 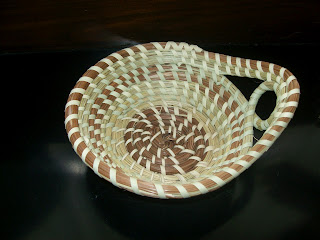 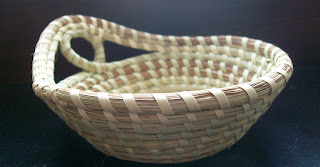 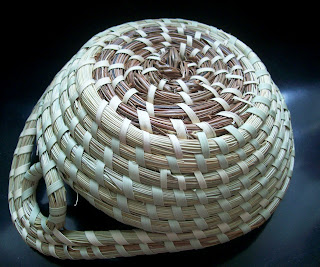 She was pleased to pose with her basket for my blog post. 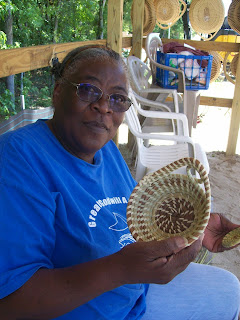 The one other time I went to Charleston I had to forgo buying a basket even though I really wanted one.  They are quite pricy as all quality handcrafts should be.  Each one represents hours of work.  This time I didn't let the opportunity slip by.

Elizabeth Cooper Eady has donated large baskets to charity that have sold for as much as $3,500.  She is featured in Mary Alice Monroe's book, Sweet Grass.  This led to her baskets being displayed at the Margaret Mitchell House.

Now I finally have the basket I've been wishing for.  Life is good!

Helen and her Daughters said…
The basket is beautiful, I love Charleston and always go to the Market when I'm there. So happy you finally got your basket!
June 6, 2012 at 3:20 PM

Unknown said…
Those baskets are beautiful! I spent lots of time down that way when I was younger, and my grandparents lived down there. I always wanted a basket too, but they are pricey. I'm glad you finally have yours!
June 6, 2012 at 4:38 PM

RaNae @EweCreekCottage said…
Pretty basket I used to have a tall one Happy belated Birthday and the frog bowl needs to go on your aqua table that turned out so cute.
June 6, 2012 at 5:16 PM

Chenille Cottage said…
Oh, how I love and appreciate sweet grass baskets! Years ago, I visited Charleston and purchased a lovely basket as a gift for a friend. I have regretted not buying one for myself, but, funds were low. I will be happy, now, though...to enjoy yours!
what a wonderful post, my friend!
Blessings and Happy Rednesday!
Carolynn
Thank you for your comments and for coming back and visiting my blog once more!
June 6, 2012 at 7:46 PM

Thoroughly Modern Me said…
I loved reading about these baskets. We saw the same items in Charleston on a visit last year. Thanks for the scoop!
June 6, 2012 at 10:38 PM

Glenda said…
Thanks for visiting my "Flea Market Junky" blog! After reading a couple of your posts, I realize I'm hooked - we have the same love of thrifty shopping. So I'm your newest follower. I've been to Charleston a good many times as we live so close - about a 2 hour drive. Next time I'm buying one of those baskets!
June 7, 2012 at 9:18 AM