June 19, 2012
I just love to thrift shop and once again I came home with a treasure to keep and some dishes I have other plans for.
It was half price for Seniors Day and I pretty much stocked up.  The girl at the register gave me an additional discount at the register for wrapping all the dishes.   Here is a sampling: 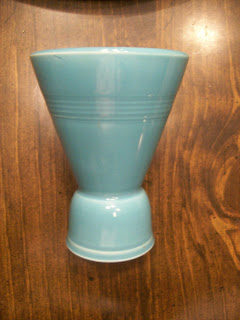 A Homer Laughlin egg cup in my favorite color!
Some pretty dishes 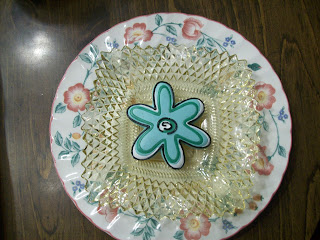 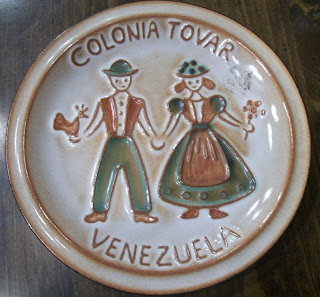 A plate marked Japan (in the old way...a black stamp) 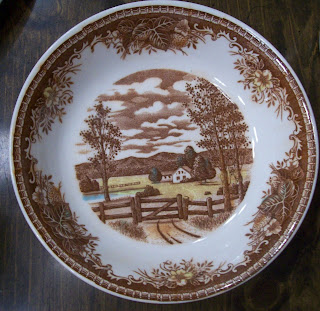 This had a crumbling sticker for $1.99 from many years ago.  It's in beautiful shape and I have a plan for it! 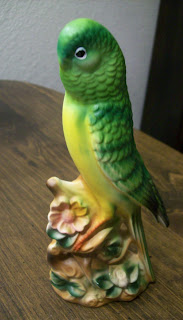 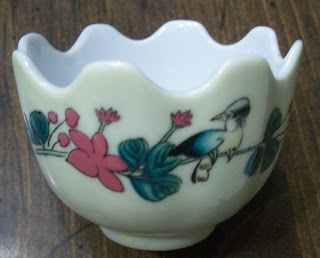 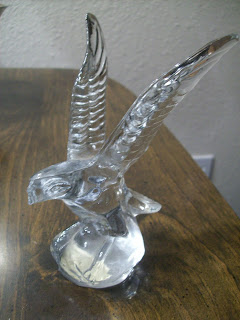 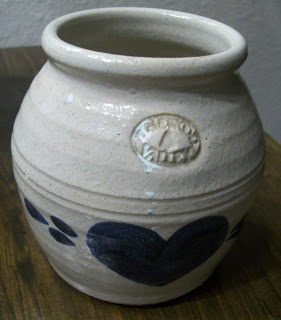 Yes, it does have some paint that needs to be removed.
And there is a story behind these tarnished pieces of silver 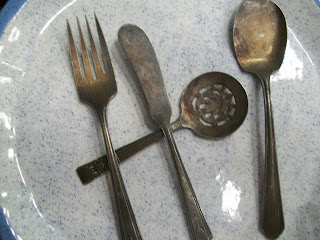 I have been cursed today because of this silver crossing my palm.

This is the story.
A woman at the Salvation Army store was rifling though the box of stainless and I listened to the clink, rattle and crash while I was browsing the plates and cups.  (You would be proud of me, I did not buy a mug today for myself.)  Anyway I was waiting for her to finish because I wanted to find a pie server or two or some interesting spoons for a project.
She left but I didn't go over right away,  I finished sorting through the plates first.
She had pulled out some silver plate stuff  and left it lying on the shelf above, but obviously had decided against it as she had been away from the box for quite some time.
I looked at it, liked it and put it in my cart.  I then spent a good deal of time looking through the big box myself.  Later as I was wandering the store, she spied the spoons in my cart.  She came up to me and asked me if I had taken the spoon from the shelf.  I replied in the affirmative.  She then said, in a very hostile voice, holding her hand out. "I would like my spoon back."  as though I had stolen it.   I was taken aback with her rudeness so I said I planned to purchase it myself.  She demanded it back and I calmly said "No, I'm buying it, you put it back."   She said she left it on the shelf so she could gather other things together and when she came back it was gone.  (Who has to set a spoon down to gather stuff? )
Don't judge me.  I didn't give it back.  If she had nicely asked for it in the first place and told the truth, that she decided she really wanted it after all, of course I would have given it to her.  It's only a spoon for heaven's sake!  But she tried to bully me into giving it to her and I wasn't going to let her do that.
She cursed me by saying Karma would get me and stalked off.
Well...So far, I got an extra discount and discovered the egg cup is worth anywhere from $10 to $65  haha..according to ebay.  Maybe standing up to bullies gives good Karma.

Can you guess my project?

Bijou Sugar-Socks said…
jeanne well done! i cant stand bullies! if she really wanted those spoons then she should already have put them in her cart and not leave them lying around! that egg cup is a treasure by the way and in my favorite color too! GMTA!
June 19, 2012 at 2:18 AM

Barbe @ Beez Rental Designs said…
Hi Jeanne,
Boy you really scored on all your great finds. And I'm a fan of the turquoise egg cup, also. What a rude lady. Anyone knows you don't walk away from something you want at a thrift store. I think you handled it well, she should have just said she changed her mind and could she have it back. I did that with a lady who had the other sham to a bedding set I was buying. She looked in my basket and saw I had the curtains, dust ruffle, comforter, and even window topper so she said "Sure, I was just going to cut it up for a project". She said she was hoping to find the other sham but didn't mind giving it up. We still say hello as we both frequent this store often. : )
June 19, 2012 at 4:04 AM

Barbe @ Beez Rental Designs said…
Oops forgot to mention I'm your new follower and thanks for linking to the Frugal Treasures party.
June 19, 2012 at 4:55 AM

Grammy Goodwill said…
How rude of that woman. I like all your goodies and am jealous that your store gives any discounts!
June 19, 2012 at 12:43 PM

Betsy@My Salvaged Treasures said…
Good for you! I'm so happy you stood up for yourself. She probably thought that if someone else was interested in it, then it must be worth something. She should have put it in her cart or just hung onto it. It's not what you say, but how you say it. I'll never forget an obnoxious woman at a yard sale who kept saying to me "oh, I was going to get that." Every time I picked something up, she wanted it. Well....she didn't get it. Great story and great finds.
June 19, 2012 at 4:03 PM

Sue McPeak said…
Sounds like the Bully Shopper forgot where she was...afterall it was Goodwill. Which BTW I, too, love to shop and over the years have found wonderful things. I'm very impressed with your Homer Laughlin TURQUOISE Egg Cup...great find.

Crack You Whip said…
My ex-husband loves the Goodwill and he has been bullied there, but it took just one bad experience for me never to go back.

Rebecca said…
Would you believe my husband and I visited Colonia Tovar and came back with a dinner bell from there????

Helen and her Daughters said…
Sounds like the crazy scary lady that I ran into a few weeks back. she scared me so bad I gave up the item. Good for you for standing up to her!
June 19, 2012 at 9:57 PM

Chenille Cottage said…
Hi Jeannie!
You have found some wonderful treasures! How I love to putter around in thrift shops! There is always at least one thing that beckons and says..."take me home'!
Happy Rednesday!
Carolynn
June 20, 2012 at 1:52 AM

Wendy said…
Thank you for making me bust out laughing today!!! You are my hero, Jeanne! Good for you for not backing down. IMO if you set it down and walk away-it's fair game (that's why we have carts). Btw, the silver was my favorite before I read about the rude woman but the story makes it extra special. :)
June 20, 2012 at 10:57 AM

Amazing the nerve some people have, isn't it?! Put it down, walked away from it, but it's still theirs. Nuh uh. Good for you for sticking up for yourself.

Angie @ Knick of Time said…
LOL - glad you stood your ground and defended your spoon! I would have been tempted to thunk her over the head with it!

Debbiedoos said…
Hi there Jeanne. What great finds..fun ones for sure. Thanks for sharing with the newbie party.
June 20, 2012 at 9:03 PM

The little egg cup is adorable and so is the small hand-painted cup.

Connie@shabbyforsure said…
Hi, Looks like you have access to a pretty nice thrift store. I live in central Florida and I am your newest follower...Connie
June 26, 2012 at 8:07 AM

Thoroughly Modern Me said…
Congrats on your feature at Beez Rental Design. What a great find you had.
June 27, 2012 at 5:11 PM