We took our trip to Dayton in July in order to attend the National Cadet Competition for Civil Air Patrol Drill Teams.  Our Granddaughter, Kyra Willis was a member of the team from Raleigh, NC representing the Mid East Regional Champions.  There were six regions represented nationally.

Kyra, 14,  really enjoys being a Cadet in the Civil Air Patrol.   In addition, to the Drill Team , she also is a member of the Honor Guard.

The competition consisted of a written exam, inspection, drills, volley ball, running and a question and answer competition.

Here is the Mid East Region Drill Team marching out on the bright yellow floor. 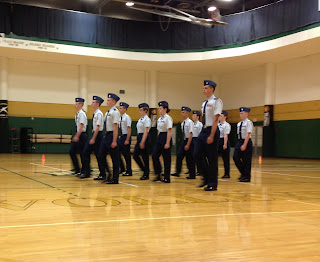 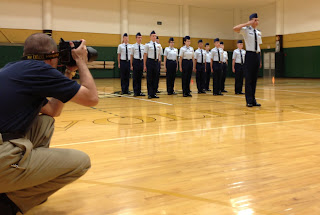 A professional photographer was there to record all events

Here is a photo he took of Kyra during the inspection 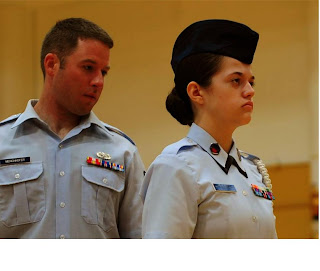 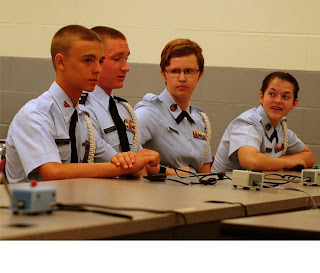 My granddaughter, Lauren compiled this photo of the volley ball game and inspection. 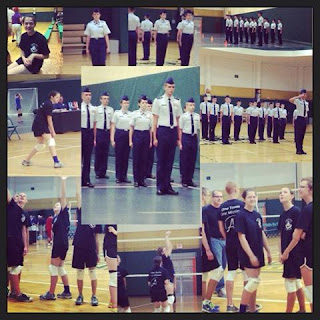 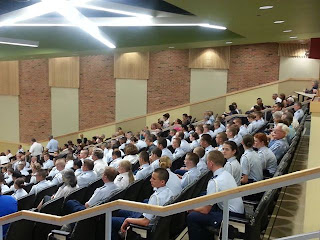 Kyra's Region came in 4th out of six teams.  We were proud of that accomplishment.  They were a brand new team up against teams that had won previously and been together for several years.  Every team did a wonderful job and it was quite exciting to see all the events.  The teams conducted themselves in a sportsman like manner in every instance.  It was a pleasure to be at the events.

Kyra was pleased that practically her whole family came out to see her compete.  Kyra's father First Lieutenant Michael Willis USAF is the team advisor. 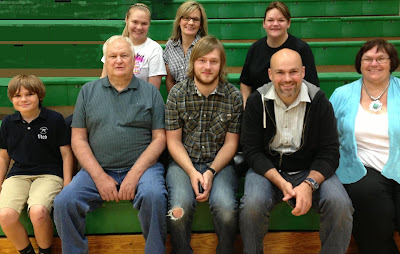 Sallie (FullTime-Life) said…
What a lovely and talented family you have. Congratulations to all.
August 4, 2013 at 8:35 PM

Gemma Wiseman said…
What a wonderful experience for Kyra. And that looks like a very proud family. So you should be. Interesting photos.
August 5, 2013 at 4:03 PM

Unknown said…
You must be very proud of your granddaughter! What a great activity to be involved in. I'd never heard of this. It's good to see young people committing to serve others. Thanks for stopping by my blog. Have a fabulous week!
August 5, 2013 at 5:16 PM

Debbie said…
what a lovely and supportive family!!

i like the collage of pictures but they are all really special!!

Anonymous said…
Hi, can you please give Kyra my email? It's kaylea@montysoft.com
I'm a (sort of) cadet in the Tidewater Composite. She might not know me as Kaylea, so just say I'm either Spiroff or the girl with the Nirvana t-shirt. She wanted to email me something, but I never got the chance to give her my email.
August 29, 2014 at 1:31 PM